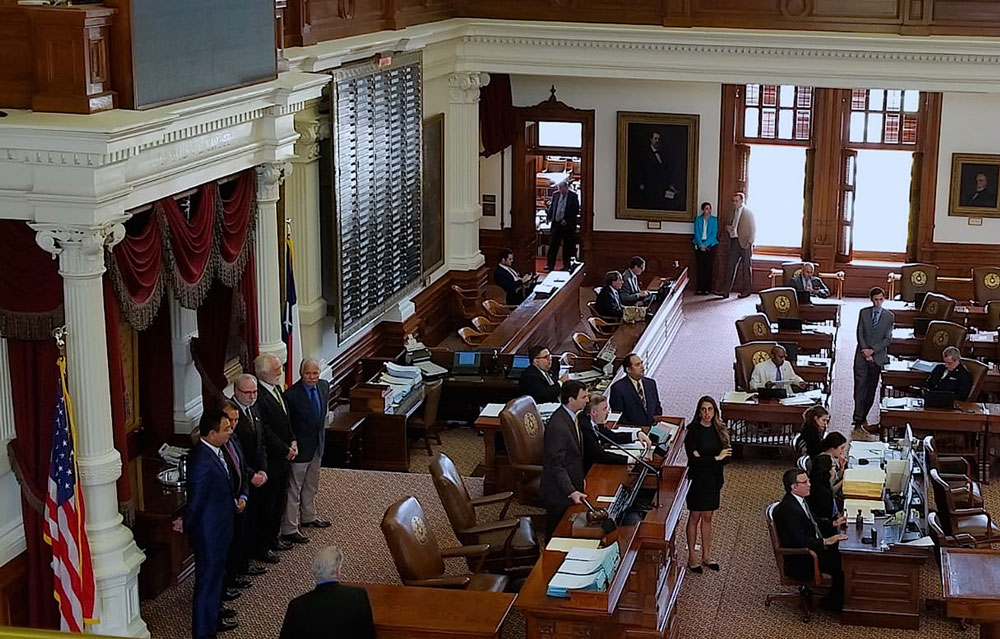 Standing on the dais are, from left to right, Jorge Nunes, Senior Anchor and News Reporter with Univsion 41, San Antonio; William E. Millet, filmmaker and Lifetime Member of the CBBS; Andy Cloud, Director of CBBS; Spanish Ambassador (retired) Miguel Angel Mazarambroz; and Dan Arellano, Bexar County Historical Commission member. All of the men are strong supports of CBBS who helped with the MOUs and the legislative process.-Courtesy photo

Courtesy of the Center for Big Bend Studies

The Center for Big Bend Studies (CBBS) of Sul Ross State University in Alpine was recognized May 25, 2019 on the floor of the Texas House of Representatives for two separate Memorandums of Understanding executed between the Center and entities in Mexico and Spain.

Rep. Poncho Nevárez offered the resolution which outlines the important contributions the Center has made beyond the Texas border. In July of 2017, Diego Prieto, Director General of Mexico’s Instituto Nacional de Antropología e Historia (INAH) and Sul Ross State University’s President Bill Kibler signed a Memorandum of Understanding (MOU) in Mexico City to expand and strengthen scientific and academic cooperation for the research, conservation, dissemination and management of cultural heritage on both sides of the U.S.-Mexico border. The INAH is the federal agency that oversees and investigates all anthropological and historic sites in Mexico.

In 2013, the CBBS served as a liaison in the repatriation of thousands of artifacts to INAH. This and other collaborations between the CBBS and INAH in the recent past set the stage for the historic MOU, valid for five years, which is the first such agreement between the Mexican agency and any entity in the United States. Since the signing, the CBBS and INAH have supported one another at events and conferences along the border, shared data on projectile points and ceramics, and worked together documenting several sites along the Rio Grande downstream from Ojinaga, Chihuahua. Additional collaborations are being planned, especially at La Junta de los Ríos—where the Río Conchos of Chihuahua and the Rio Grande join—to gain a full understanding of the rich prehistoric and historic past there, integral to all borderland studies of the region.

From Mexico to Spain, in his resolution Nevárez also included the MOU between CBBS and the mayor of Ágreda, Soria, Spain. This MOU, signed in April of this year, permits CBBS and Ágreda to work together on projects of mutual interest. Ágreda was the home of Maria de Jesus, also known as the “Lady in Blue,” a cloistered Catholic nun in the early 17th century who is said to have ministered to and influenced indigenous groups in southwest Texas.. The Lady in Blue story is part of history in both Spain and West Texas, and the agreement will support efforts to uncover additional information about this legacy.

House Resolution 2103 recognizes and commemorates the important historic and cultural contributions the Center for Big Bend Studies has made in the West Texas borderlands through the two MOUs. As the resolution so aptly states, “the history of the Big Bend region is inextricably linked to the histories of Spain and Mexico, and the research agreements between CBBS, INAH, and the city of Ágreda will provide invaluable insight into the proud legacy of the Spanish and Mestizo founders of Texas.”

The CBBS is a department at Sul Ross established in 1987 to foster interdisciplinary scholarship and research on the prehistoric and historic cultures of the borderlands region of Trans-Pecos Texas and northern Mexico. For more information about the CBBS, visit the website at https://cbbs.sulross.edu/.