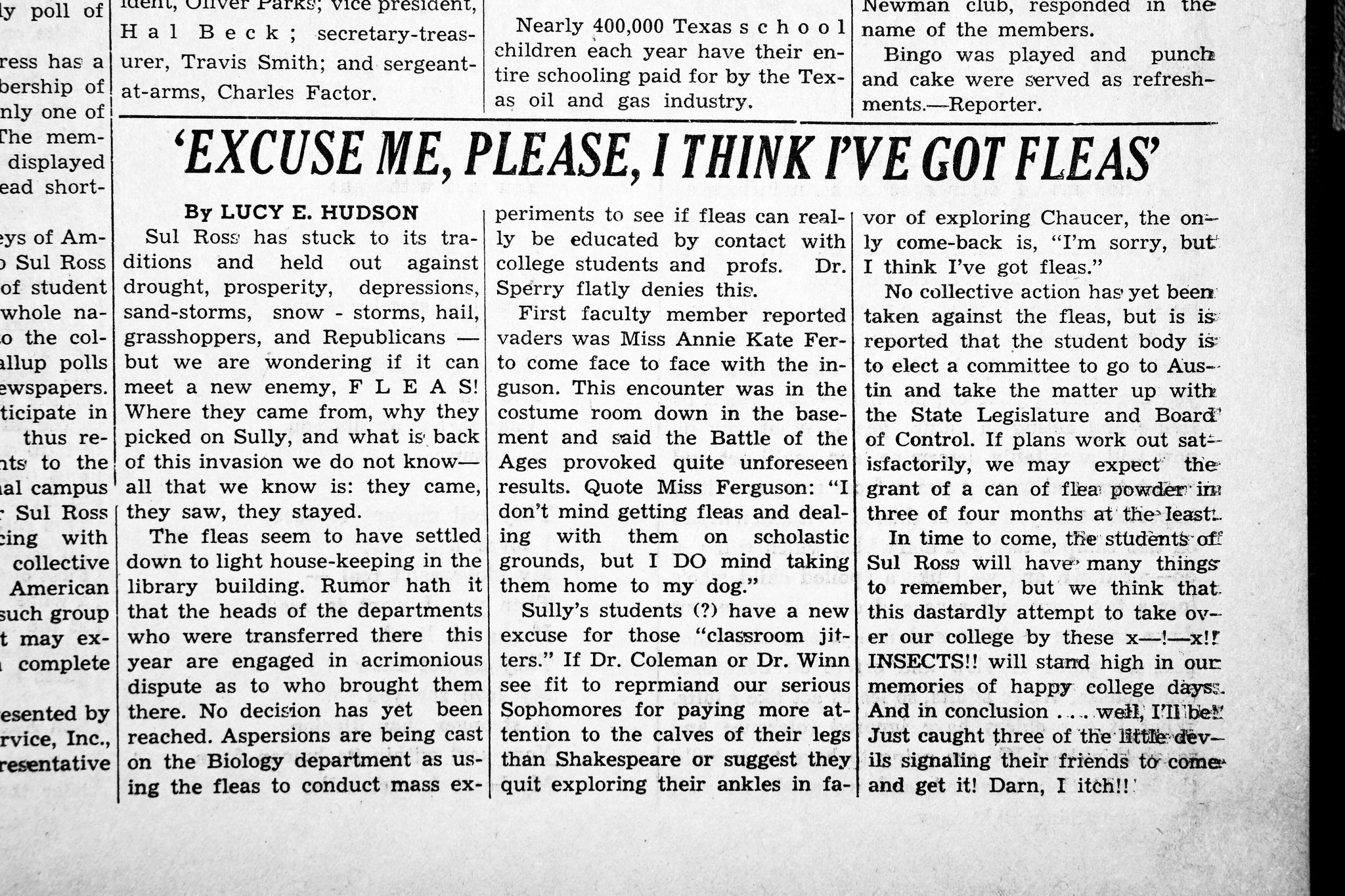 Sul Ross has stuck to its traditions and held out against drought, prosperity, depressions, sandstorms, snowstorms, hail, grasshoppers, and Republicans.  But we are wondering if we can meet a new enemy, F L E A S!

Where they came from, why they picked on Sully, and what is back of this invasion we do not know.  All that we know is: they came, they saw, they stayed.

The fleas seem to have settled down to light housekeeping in the library building.  Rumor hath it that the heads of the departments who were transferred there this year are engaged in an acrimonious dispute as to who brought the fleas.

No decision has yet been reached.

Aspersions are being cast on the Biology department as using the fleas to conduct mass experiments to see if flease can really be educated by contact with college students and professors.  Dr. Sperry flatly denies this.

The first faculty member reporting the invaders was Miss Annie Kay Ferguson.  This encounter was in the basement costume room and said Battle of the Ages provoked quite unseen results.  Quote Miss Ferguson: “I don’t mind getting fleas and dealing with them on scholastic grounds, but I DO mind taking them home to my dog.”

Sully’s Students have a new excuse for those “classroom jitters.”  If Dr. Coleman or Dr. Winn see fit to reprimand our serious sophmores for paying more attention to the calves of their legs than Shakespeare, or suggest they quit exploring their ankles in favor of exploring Chaucer, the only comeback is, “I’m sorry, but I think I’ve got fleas.”

No collective action has yet been taken against the fleas, but it is reported that the student body is to elect a committee to go to Austin and take the matter up with the State Legislature and Board of Control.  If plans work out satisfactorily, we may expect the grant of a can of flea powder in three or four months at the least.

In time to come, the students of Sul Ross will have many things to remember, but we think that this dastardly attempt to take over our college by these x—!—x!! INSECTS!! will stad high in our memories of happy college days.

And in conclusion . . . well, I’ll be!!  Just caught three of the little devils signaling their friends to come and get it!  Darn, I itch!!