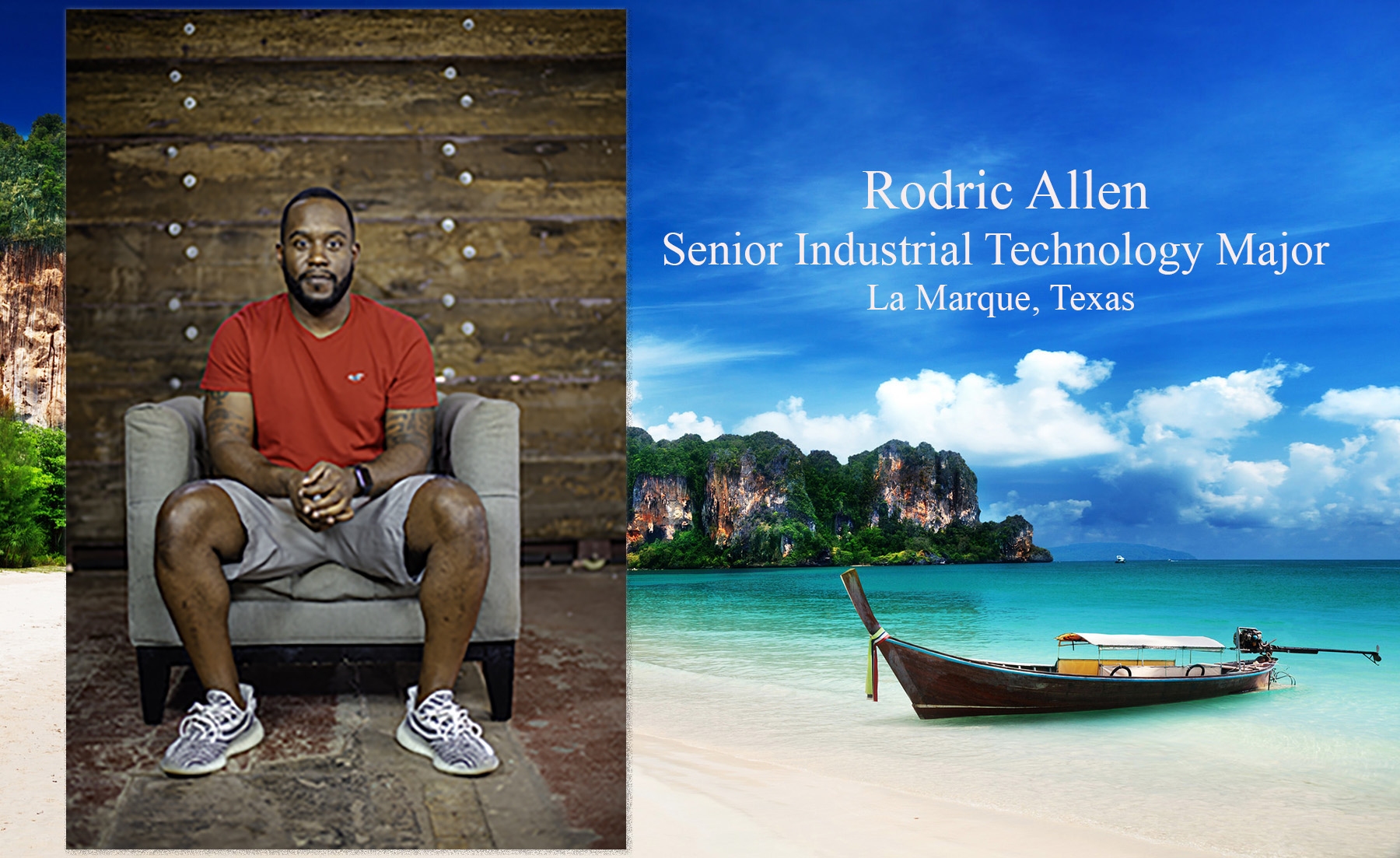 The fallout of the current COVID-19 pandemic has touched nearly every aspect of life for the entire global population.

But for Sul Ross State University senior Industrial Technology major Rodric Allen, the crisis has hit not only close to home but away from home.

A native of La Marque, Allen has spent the past six months as a material/logistics manager for TechnipFMC, an engineering, procurement and construction company based out of Houston. His job assignment pertains to oil and gas refinery projects in Thailand where Allen has been stationed since January.

“My job is to ensure all materials needed to erect the facility will arrive at the right place, at the right time and at the right price,” Allen said. “My assignment was initially one year but due to the COVID-19 pandemic, things have dramatically slowed down.”

Allen’s drama began following the Christmas and New Year break which marked the last time he saw his family.

“Essentially we are allowed vacation and R and R every two and half months,” said Allen. “However, I’ve been stranded in Thailand since January 2020 after returning from vacation from Christmas and New Years break. So that means I haven’t been home to Houston for half a year and counting.”

He added that there is currently no date set for his return to Texas.

“At the moment, no,” he said. “We truly do not know what will happen. The country of Thailand has banned all incoming international flights until the end of June.”

Allen said there are talks of the ban being extended through July.

“So the company gave us notice if we leave we may not be able to return, especially due to the rising numbers of cases in the USA.”

The project with the company is scheduled to be completed in February, 2021.

“That maybe the time I am able to return home,” he said.

When asked how COVID-19 has impacted Thailand medically, socially and economically and the affect the pandemic has had on international relations, Allen said the nation has adapted remarkably well to the crisis.

“As a country Thailand’s COVID-19 numbers are low,” said Allen. “Medically, the country has done a really good job, quarantining, treating and identifying the patients who really need the care.”

According to the latest figures, as of Wednesday, June 23, Thailand has reported 3,156 positive cases with 3,023 recoveries. A total of 75 hospitalizations have been recorded with 58 deaths out of a population of 69.5 million.

“I went to visit the Bangkok-Pattaya hospital two weeks ago and I was very impressed with the structure and processes in place just to enter the facility,” Allen said.

He noted that social and economic factors have been affected the hardest, especially in the area in which Allen resides in the Bang Lamung District.

According to Allen, Thailand’s economy depends heavily on tourism which accounts for an estimated 12 percent of the country’s GDP.

“But in Pattaya nearly the entire economy runs on tourism,” he said. “The social impact was hard when the government shut down all bars, closed all hotels and began to limit in-country travel. This meant separation between providences and neighboring countries and the tourism came to a complete halt. Literally, Pattaya turned into a ghost town.”

In his spare time, Allen works as a freelance photographer.

“I tried to document it through the camera to create some perspective,” he said. “Economically, the town took a major hit. Like I said, Pattaya depends on visitors and tourism. However, many companies issued work-from-home orders to non-essential employees, while others proceeded to work as if nothing happened.”

With the banning of incoming international flights, blocking of the border and virtually zero tourism dollars (most tourists are from China, Korea and India), Allen said Thailand could lose 1.3 trillion baht (53 billion USD).

Although being stranded overseas for six months, Allen still keeps graduation in focus.

“With the current plan and some small financial adjustments, I am prepared and praying to complete my degree from Sul Ross this fall,” said Allen. “However, if I have a few straggler courses hanging over me, I will complete everything in the spring of 2021.”

On his decision to attend SRSU, Allen said three factors came into play.

“I decided on Sul Ross because I am paying for everything out of pocket and I have been through several universities that pushed the ‘money’ agenda,” he said. “I wanted a university that would accept as many of my credits and apply them as properly as possible. Sul Ross fits the mold and the online format is the only way for me to take classes due to my ‘unpredictable’ work schedule.”

Allen noted with candor the differences in national responses to the pandemic between Thailand and the U.S.

“Reading the news and speaking with my family on a daily basis, I see everything America is going through with this pandemic,” he said. “Honestly, I don’t believe it was properly handled by those in power. The dollar drives many decisions and with corporations losing millions to billions, they influence some of the decisions being made about opening up the country.”

“Thailand seems to be willing to take a loss when it comes to the economy. They want to make sure safety is first,” he continued. “We were on lock down for three months before restaurants, small hotels and malls returned to business. I’m not saying this is not America’s approach but why is there a rush to re-open?”

According to Allen, Thailand incorporated lock downs on beaches, implemented curfews, closed malls, grocery stores were limited, entry scans were mandatory, masks are mandatory and bans on alcohol sales from restaurants and stores were instituted.

“If you take a taxi, you must sanitize up and wear a mask. But here you have many expats who do not obey the rules and tend to think those precautionary rules do not apply to them,” he said.

Allen also related the experiences of other Americans he is working with in Thailand during the pandemic.

“Prior to COVID, things were ok,” he said. “We work long hours six to seven days a week, so when we had a moment off, we all made the most of it.”

“Now, it’s different,” he continued. “There are some guys stuck in the USA, who are dying to come back. We also had a few guys just get up and leave because our options are limited. We’re not sure what we can do regarding this pandemic.”

He also noted the mental and physical toll the crisis has had on his workmates.

“Everyone is tired,” he said. “We all want to go home and rest, recharge and start again but we can’t. It’s a mixed bag of feelings when it comes to how some of us are handling this and being stuck here.”

When asked about what he misses most about home, “it’s my family,” he said. “Then comes my home, of course. As I’ve travelled and worked around Asia, I miss simple foods. Whether it be fast food or a simple breakfast burrito, I just miss those small comfort things. I also miss driving, I am a big car guy and I love to drive, but here we are prohibited to drive or ride on motorbikes, so I bike everywhere.”

What future impact will COVID-19 have on Allen’s career? “Great question,” he said. “My kids are growing and I have spent a significant amount of time away working.”

“COVID-19 made me realize my time is limited with my wife and kids,” he added. “I’m put into certain situations that are unfavorable to them. Normally, after I finish an overseas assignment, I will rotate back to the project at the project jobsite in the USA which is normally close to home.”

However, the impact on Allen’s project is expected to extend through 2022 and the company as a whole has issued furloughs and layoffs.

“I freelance and my family also runs an online business that was going well until COVID,” said Allen. “So if all else fails I will push to make those options successful until the economy bounces back. It’s very uncertain or unknown at this point and one of our biggest fears is the unknown.”