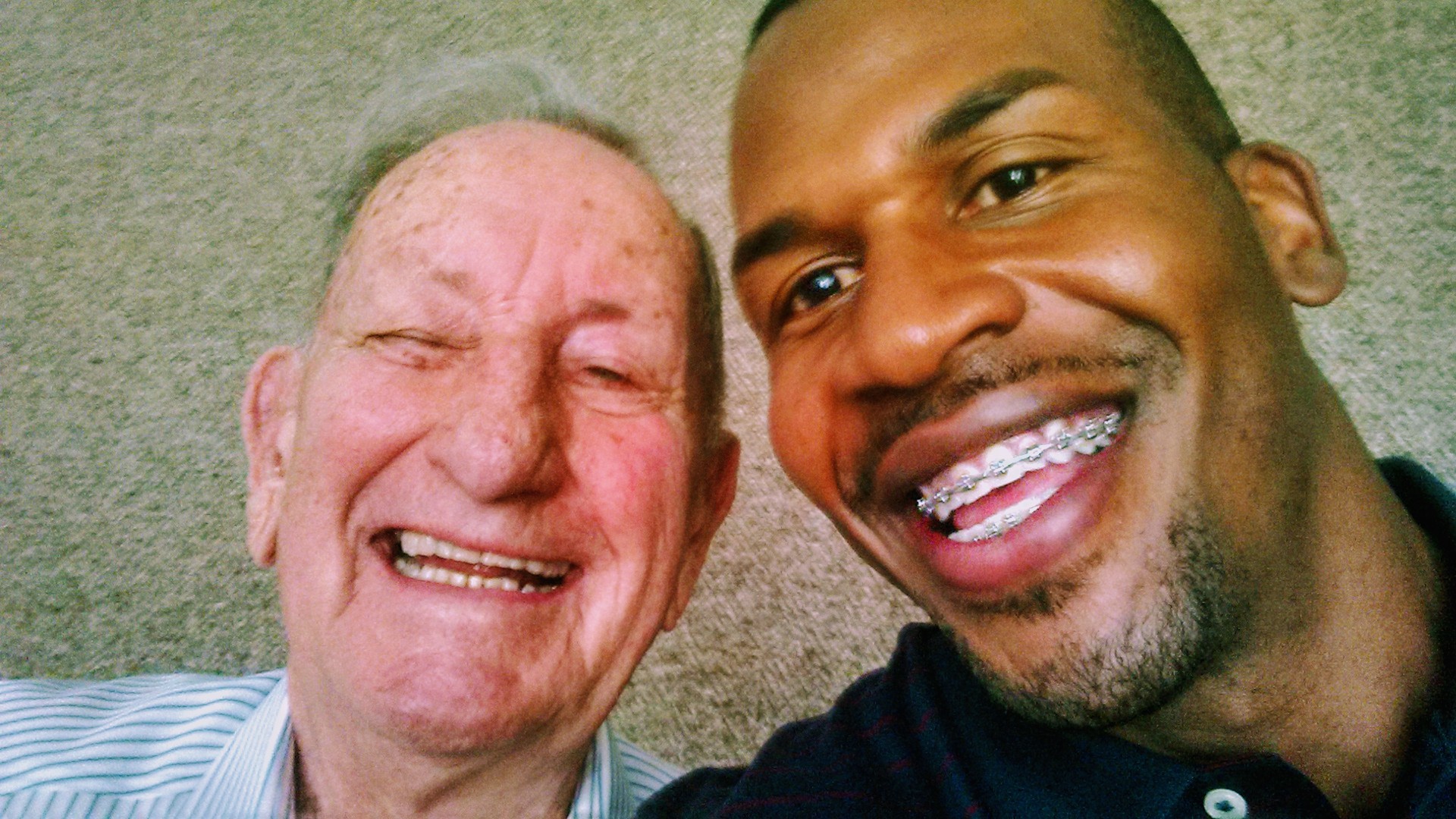 His website states “It’s more than possible, it’s a must”.

That mantra has driven Tiki Davis through the gauntlet of a troubled upbringing: Experiencing his own mother’s prison death, surviving a murder attempt on his life and a host of other events that could have easily turned the Sul Ross State University alumnus into just another statistic.

But it was that combination of possibility and personal obligation that availed life-changing and life-improving opportunities for Davis.

Despite his tumultuous upbringing, Tiki was a gifted athlete and brought his football talent to Sul Ross where he earned a Bachelor’s (2003) and a Master’s Degree (2005).

From his days in Alpine, Davis returned to his native Odessa where he cut his teeth as an entrepreneur, an actor and now is a fulltime motivational speaker traveling across the nation and around the world. A book and documentary film chronicling Tiki’s life is also in the works.

“Giving up is easy and it was expected but it’s much harder to continue and to defy those expectations,” Davis said. “Had I given into the hopelessness and despair, I would have ended up like a lot of the people in my neighborhood.”

Davis said excuses from internal and external forces provided many opportunities and temptations to become a product of his environment.

“Most people I was around growing up had a justification for their personal and destructive conduct,” he said. “But I didn’t want that for my life. I knew excuses were why many of them ended up living wasted and unproductive lives.”

The option to quit left no alleyways or positive recourse for Davis but he says humility was the rudder that kept him on course.

“I thank God that as a young man I had the sense to reach out and ask for help,” he said. “Most of my peers refused to foster any kind of an introspection that caused them to reevaluate their direction in life.”

Football proved to be an outlet for Davis who, at the time, had no academic aspirations.

“Football was what drew me to Sul Ross and basically kept me in school,” said Davis. “I never went to college with the idea of completing a four-year education. My whole goal was to score touchdowns and maybe make it to the NFL.”

After his playing career with the Lobos, Davis began to see the necessity of making the change from student-athlete to student.

“I came to Sul Ross when I was 20 years old and played football for three seasons,” Davis said. “After athletics I had to look myself in the mirror and ask ‘who am I really?’”

By his own account, Davis found himself a washed up player with limited to no prospects of an NFL playing career.

“That was a time of self-reflection once I embraced that I was not going to the pros,” he said.

At a crossroads, Davis faced returning to Odessa as a college dropout or making the difficult decision to continue with his education.

“I had to give myself a chance so I stayed at Sul Ross, worked through the grind and ended up graduating,” said Davis. “Putting the football down was difficult but I was having to make the transition from being a player on the field to being a player in life.”

“The graduate degree really opened up a lot of doors after school,” Davis said.

Not long after his days at Sul Ross, Davis began ventures in the business world including buying Sam’s Bar-B-Que in Odessa, a traditionally black-owned establishment. Following the purchase of

Sam’s, Davis expanded the restaurant’s catering business and turned it into one of the most successful oilfield catering companies in the area.

Davis also tasted success in the petrochemical market with the help of wildcatter-businessman, the late Clayton Williams, Jr.

Davis served as the only black quality control engineer for Williams’ company, a position he enjoyed for seven years.

“Armando Madrid, who was a petroleum engineer and Texas Tech graduate, got my foot in the door working for Mr. Williams” said Davis. “Armando informed me that Clayton Williams Energy, Incorporated (CWI) was in need of a quality control engineer.”

As quality control engineer for CWI, Davis provided oversight and structure insuring proper and ethical distribution of drilling and pumping chemicals by those service companies.

“I came to work for CWI on a trial basis,” Davis said. “But I became the best in the business in that position and I was able to create a niche for myself.”

Davis revealed he didn’t actually meet Williams until his second year at CWI.

“I was able to save CWI millions of dollars through my work as quality control engineer,” he said. “So Mr. Williams just had to find out who this young, black kid was that was saving him all this money.”

From that first meeting, two years into his career with CWI, Davis began a long and prosperous relationship with the Texas oil tycoon.

One anecdote Davis told was how Williams mistook him for a football player from Williams’ alma mater, Texas A&M University.

“He swore I played ball at A&M,” said Davis. “I assured him I didn’t and that I was a Sul Ross grad. He said that was even better because Lawrence Sullivan Ross was A&M’s seventh president.”

“It was just a match made in heaven,” he said.

Davis’ and Williams’ working relationship would continue through the next five years.

“He was a businessman but very congenial and a lot of fun to work for and associate,” he said.

Williams passed away on February 14 at the age of 88.

Some of state government’s biggest movers and shakers were in attendance at Williams’ funeral including former Governor Rick Perry.

“It was a special time for everyone as we remembered Mr. Williams’ life,” said Davis. “But it was very special for me not just because of my working relationship with him but I was also the only black individual at his funeral other than the singer.”

Other business opportunities surfaced, including successful ventures in the real estate market.

But a story like Tiki’s needed a voice and so he took his stormy past as a youngster, his determination, work ethic and business savvy and used it as a tool to motivate and encourage others.

Taking his saga of triumph over tragedy, Davis penned his life story into what became known as The Tiki Factor.

“Although I speak to a wide range of people groups, the heart of the message is the same. It never changes,” Davis said.

“It’s that grit and determination to press forward through the darkness and difficulty regardless of your background or your present circumstances.”

He also said that incorporating a compelling narrative into his message is a key ingredient in relaying motivation to others.

“I love to tell stories. Everyone loves a good story. It provides context when relating principles of motivation,” said Davis. “I’ve been blessed to be able to use my own story of achievement despite overwhelming odds to create a framework for others and to inspire and guide them in creating their own stories of success.”

In fact, Tiki’s name has taken an acronym status of its own:

“They’re all different so there is a process of contextualization that has to be employed from venue to venue,” he said.

The fruit of his life’s peaks and valleys has inspired not just the people in West Texas and across America, but folks from around the globe.

Davis will be the recipient of the World Civility Day Award on April 9 in Gary, Indiana and will be joined by world dignitaries including the President of South Africa.

World Civility Day is in its fifth year and is an initiative to encourage individuals to treat others with dignity and respect in all their interactions.

This year’s event will host and honor 28 individuals whose lives illustrate examples of service and integrity in their communities and regions.

Davis will be the lone representative from the United State to be honored at the April 9 ceremony.

“This is an icon award,” said Davis. “Plus it happens right before my 42nd birthday so that just makes it extra special and memorable.”

The award also recognizes individuals who succeeded against overwhelming odds and, in turn, became productive citizens.

Davis will also receive an Honorary Doctorate on April 8.

“The Honorary Doctorate and the World Civility Award actually go hand-in-hand,” Davis said. “When I receive the award on April 9, they’ll introduce me as Dr. Tiki Davis.”

He said his soon-to-be Honorary Doctorate is a degree in hope.

“I want to be able to provide others with a life blue print of never giving up,” said Davis. “That’s what this Honorary Doctorate means for me.”

When asked about revealing one word that defined his life?

“Grace,” he said. “The blessings I’ve been able to experience in this life, despite those early and difficult days, can only be attributed to God’s grace.”

For Davis, it’s not cliché.

“And I don’t deserve what I have at times and it’s not all a bed of roses but it’s that hope that tomorrow brings that things will be better and that I can reach out and inspire just one more person and change the course of their life.”

Davis says a key ingredient to life is setting goals and one of those goals is returning to his alma mater to share his story. And what better venue to convey that story than the stage of commencement.

“Sul Ross will always have a special place in my heart,” Davis said. “It has been a long-standing dream of mine to come back as a commencement speaker because graduation is the starting point for a lot of young people.”

“It’s also about giving back to a place which was really a genesis for many of my life’s journeys,” he said.

Davis is scheduled to speak at two large engagements in May.

He will speak at the TED Talk on May 1 at the Globe Theatre in Odessa. Davis will join other notable speakers at the event including Dr. Ray Perryman, President and CEO of the Perryman Group and Dr. Sandra Woodley, President of the University of Texas at the Permian Basin.

Davis will then share his expertise in the oil and gas field in the auditorium of the Chevron Corporate Office in Houston on May 21.

Through everything, Davis has counted his blessings.

“I’ve lived such an amazing life even with all the crazy twists and turns but I’ve discovered through the years a simple factor that has been such an anchor in my life and that’s living for the benefit of others.”

And for Tiki Davis, it’s more than possible, it’s a must.