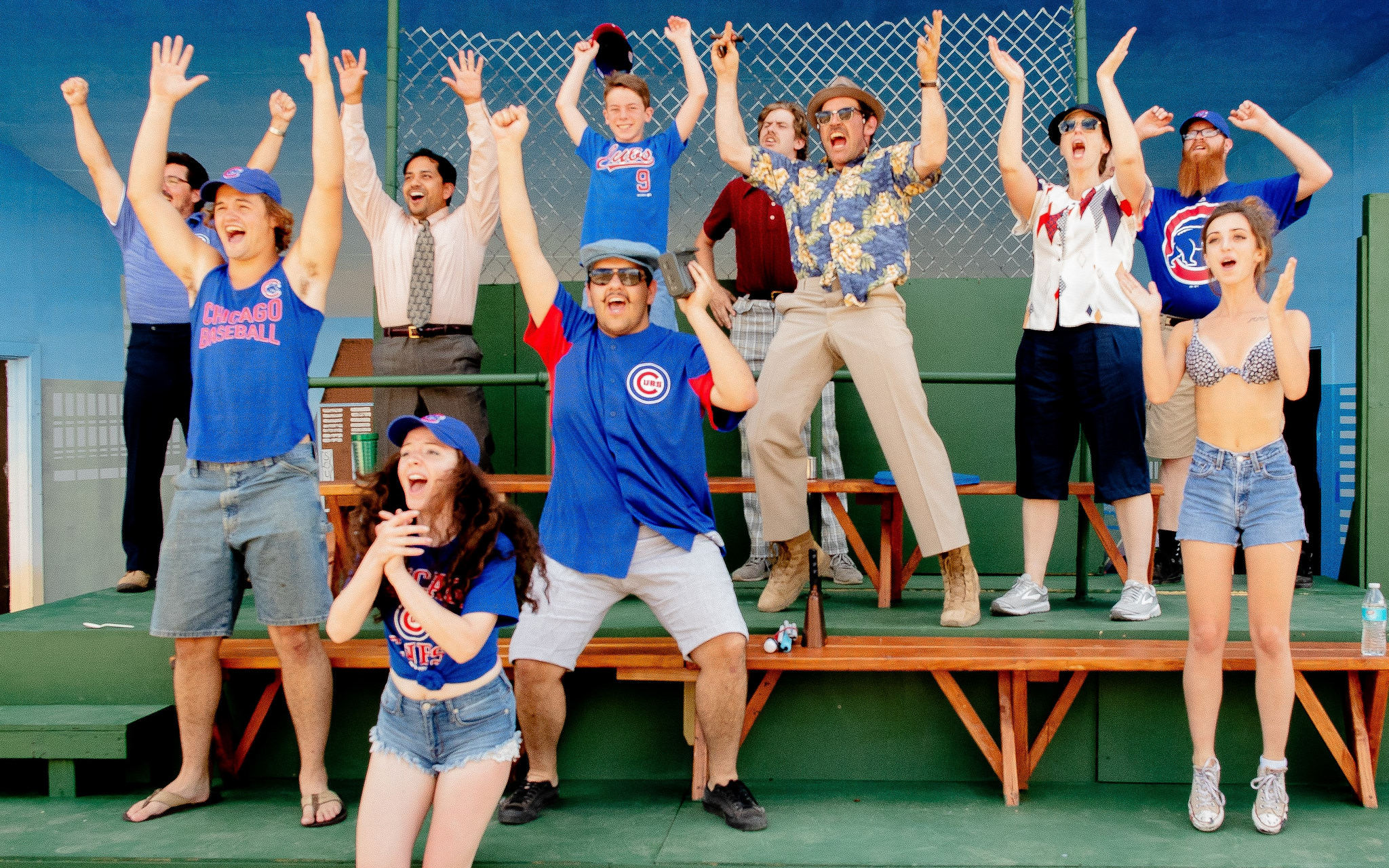 Alpine’s professional baseball season recently sprang into action with the Cowboys running onto Kokernot Field, but it’s about to step up to the plate at Kokernot Outdoor Theatre, too, as Theatre of the Big Bend presents Bleacher Bums beginning June 22.

This “nine-inning comedy” follows a group of Cubs fans who spend an afternoon in the Wrigley Field cheap seats.  The zany cast of characters cheers on their team amidst jokes, beer, betting, and an occasional philosophical decree.

The play was written in 1977 by actors from the Organic Theatre Company in Chicago.  A member of the troupe, Joe Mantegna, conceived the idea for the play while pondering the sanity of Cubs fans like himself.

“My intent was to explore the kind of fanaticism it takes to continually follow a losing cause,” he said.

The real-life “Bleacher Bums” were a crew of Cubs fans who formed when the Cubs had a few successful seasons in the late 1960s.  These fans wore yellow helmets and were known for intense cheers and trash talking the opposing teams’ outfielders.  While the “Bums” as an organization petered out along with the Cubs’ 1970s winning percentages, plenty of outfield antics remained to inspire a group of young actors and playwrights in 1977.

With only an idea for a play about fans, Mantegna and his collaborators headed to Wrigley Field, about a mile south from the Organic Theatre’s Beacon Street venue.  They brought cameras and notebooks to eavesdrop, and the Cub fan crazies in the $1.50 outfield seats didn’t disappoint.  After multiple trips to the bleachers, the Theatre troupe had their character ideas, comic devices, and even lines of dialogue for a script.

The result was not merely a play about one specific type of fan from one specific team.  As Mantegna explained in 1979, Bleacher Bums “is not a Cubs play.  It’s a fan play.  It’s a mixture of beer and heat.  By the eighth inning, these fans go berserk.”

This comedy about baseball fan berserkers was an immediate success on both the Chicago and New York stages.  Two years later, a teleplay version featuring members of the original cast was produced for public television and earned Mantegna an Emmy.  Starting in 1980, it even had an uninterrupted ten-year run in Los Angeles, a town with two professional baseball teams not named the Cubs.

In 2012, Mantegna was asked whether the play would still be relevant if his Cubs team of “lovable losers” actually won the World Series.  He laughed and said, “I’ll cross that bridge when I come to it.”  Well, just after midnight on November 3, 2016, the Cubs crossed that bridge in Cleveland, beating the Indians in the tenth inning of game 7 to win the World Series.  And, unsurprisingly, the show has gone on.  The Organic Theatre’s play about frustrated and funny human beings continues to be performed over 40 years after its debut.

You can check out the latest incarnation of Bleacher Bums on Friday, Saturday, or Sunday from June 22 through July 1 at Kokernot Outdoor Theatre.  “Nine-innings” of laughter will commence at 8:15 P.M with seats priced at $10 for adults and $8 for children and seniors.