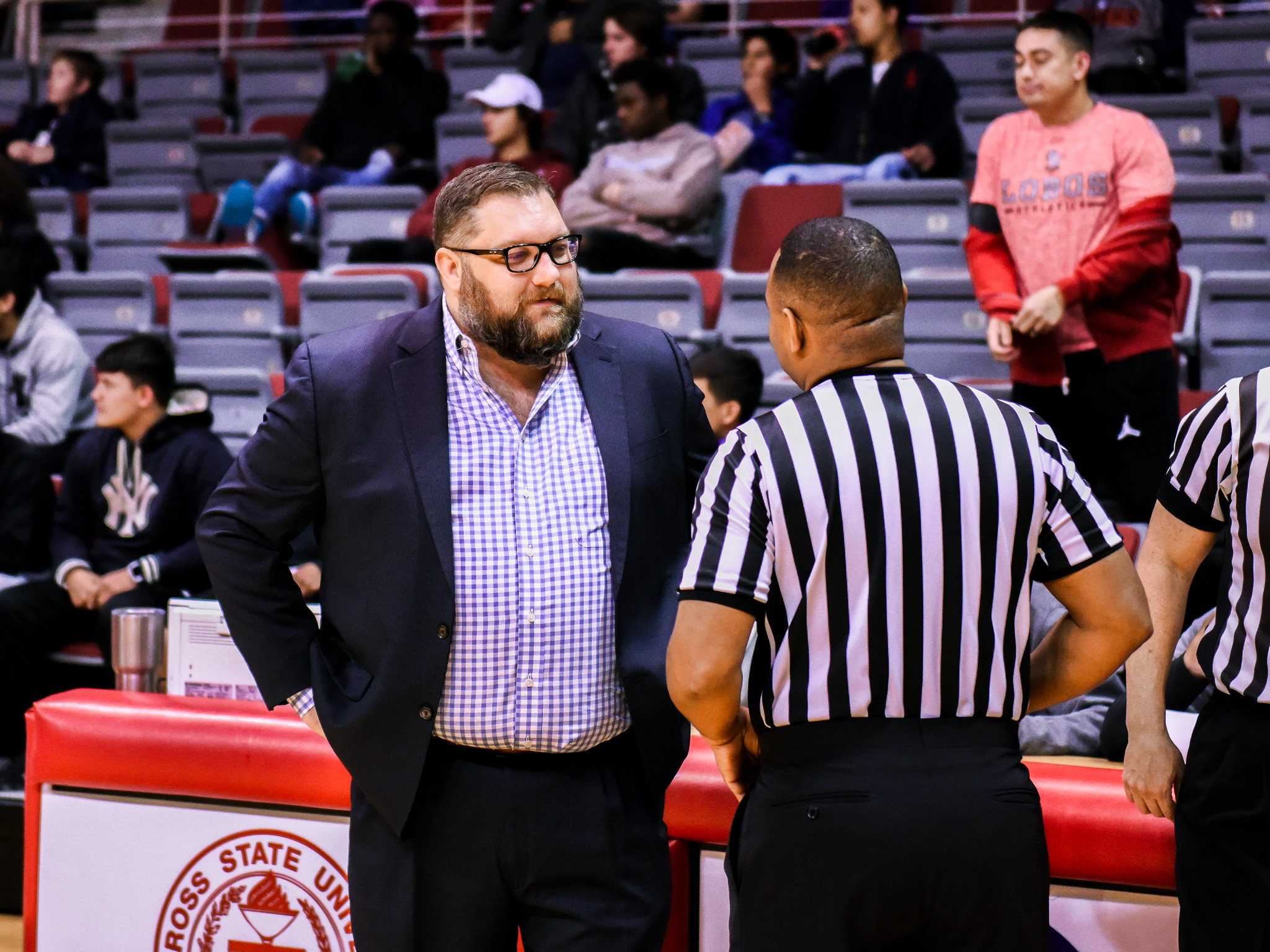 After five seasons at the helm of the Lobos men’s basketball program, Clif Carroll has accepted the head coaching position at the University of Mary Hardin-Baylor in an announcement Monday, April 20.

Carroll will begin his new position May 4.

“Coach Carroll turned around the Sul Ross Men’s Basketball program and brought us tremendous success,” said Sul Ross President Dr. Bill Kibler. “Hosting the conference tournament three times, competing in the tournament four times and winning the championship in a period of five years is unprecedented.  I am personally grateful for Clif’s dedication, passion and his unqualified commitment to the welfare of his players. We wish him and his family the very best in the future.”

In a statement Monday, Carroll said, “Dr. Kibler, Butch Worley, and Bobby Mesker took a chance on me when I was really at a low point in my career. I will be forever grateful for those three men giving me a chance. I will always have a deep admiration for Sul Ross, the community of Alpine and the Big Bend region. Everyone has treated my family like their own and we will miss Alpine greatly. I just hope that everyone doesn’t boo me when we come back to play next season.”

Carroll leaves Sul Ross with a record of 78-56 and is the all-time wins leader in program history. He collected his 73rd SRSU career win in a 93-89 conference victory at UMHB on February 6 surpassing former head coach Doug Davalos.

Carroll is a four-time ASC West Coach of the Year recipient. He received the honor during his first three seasons (2015-2018) and once again this past year after leading the Lobos to another ASC West title, his third in five seasons.

Carroll and the 2017-18 Lobos won the American Southwest Conference title which was Sully’s first since the 2004-05 campaign.

“Clif has kept me in the loop from the beginning of the UMHB search,” said interim athletics director Butch Worley. “So, I’ve had three weeks to think about how best to move the men’s basketball program forward during these challenging times. Those thoughts have led me to recommend to President Kibler that we name current assistant coach, Xavier Webb, ‘interim’ head men’s basketball coach through the 2020-21 season.”

“Taking everything into consideration, I am convinced this is the best decision for Lobo Men’s Basketball at this time,” Kibler said. “I’ve watched Xavier since he first arrived as a student-athlete and, this year, as assistant coach. It’s clear to me he was a great teammate when playing, and now is admired and respected as a coach by our current team.”

Carroll, now set to meet his former player and assistant coach twice a year, mimicked Dr. Kibler in his praise of Webb.

“Xavier is one of the most talented young coaches I have worked with,” Carroll said. “He is smart and has an unreal work ethic. As his coach, I am extremely proud of him. As his future opponent, I know we are going to have our kids ready to compete with Sul Ross with him at the helm. I could not be happier for the young man.”

Worley added that several factors were considered before recommending Webb.

“Since we’re already well into the back half of April, it would be mid-May, at the earliest, before a search could identify qualified candidates,” said Worley. “Also, because of the current COVID-19 pandemic and campus closures, our student-athletes are finishing their spring courses remotely, making it critical for our coaches to ensure their student-athletes stay engaged and successfully complete their course work.”

In addition to campus closures, Worley said that all recruiting is currently being conducted remotely. He also added that the department hopes to have a new, fulltime athletics director in place by early summer.

Webb, a former player turned assistant coach under Carroll, is a familiar name to Sul Ross.

He earned both Bachelor’s and Master’s Degrees from SRSU and lettered two seasons with the Lobos.

A native of Riverton, Wyoming, Webb accumulated an impressive portfolio in his two years in Alpine, both off and on the court.

Webb was also Dean’s List scholar at Sul Ross and has been involved in a variety of community projects mentoring youth in basketball and life decision skills along with assisting in events with the elderly and disabled.

Webb was a member of the 2015-16 ASC West Division championship team as a junior and earned All-West Division honors as a senior.

As a junior, he helped guide Sul Ross to its first ASC West Division title in more than 10 years.