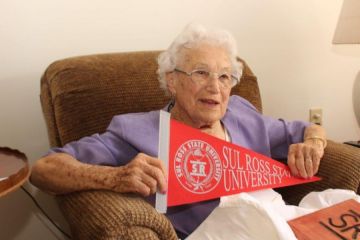 Helen Stewart Estes, a 1940 Sul Ross graduate and the university’s first Honorary Doctorate recipient, passed away in Midland on Sunday, October 6. She was 105.

Mrs. Estes, who spent 60 years in the field of public education, was nominated for and received the honorary degree in 2014.

She was nominated for “her accomplishment as a centenarian and her significant work as a lifetime educator in the State of Texas contributing to the core mission of Sul Ross State University as a teaching college.”

Estes wanted to be a school teacher since she was a child. She began her career in education in 1933, during the Great Depression, when she rode horseback along ranching and farming communities to collect school census information for local and area schools.

After receiving a 4-H scholarship, Estes attended Sul Ross Teachers College in 1934. She received her Bachelor’s Degree in Education in 1940 and went on to teach mathematics to students in grades from elementary to high school.

“I found out on Saturday (that I was awarded the scholarship) that school started Monday,” Estes said in a 2014 feature. “At the time, I didn’t have anything packed.”

Neighbors drove her from Midland to Alpine, where she began a six-year process of taking college courses in the summers and teaching in country schools from September through May. She graduated in August, 1940.

During her time at Sul Ross, Estes worked as a dormitory matron, babysitter and cleaned and cooked for faculty members. She was also active in athletics participating in archery, basketball and rifle shooting.

She married Jim Estes in 1940, about a year after meeting him in a dance held in the Sul Ross gymnasium.

She retired permanently in 1997 at the age of 83 after Jim suffered a stroke. They were married 57 years until his death.

In her 90s, Mrs. Estes enjoyed motorcycle and hot air balloon rides, as well as landing on an Alaskan glacier via helicopter.

“I keep two bags packed; one for winter and one for summer,” she said. “I still like to travel and there are still so many places to go and people to meet.”

“Mrs. Estes was the perfect first recipient of the Honorary Doctorate because she represented so well why Sul Ross State University was established over 100 years ago,” said President Bill Kibler.

“She taught, mentored and influenced generations of students throughout her 60-year career and many of her students went on to become teachers themselves.”