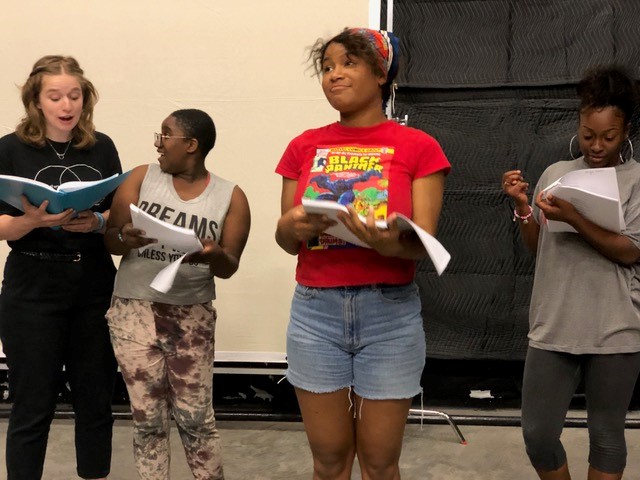 After a successful run of Our Lady of the Tortilla in the Kokernot Outdoor Theatre, Theatre of the Big Bend will open Nunsense, a musical comedy by Dan Goggin and directed by Second City alum Bret Scott.

“It’s a really sweet, funny, and heartfelt comedy from an unexpected point of view,” says Scott. “When I hear the word “nun” I think of Catholic school and rulers on knuckles, and I don’t think I’m alone in that. But these nuns are funny. They’ve got these great songs with beautiful harmonies. This show reveals a whole other side of nuns. “You wouldn’t normally put “nuns” and “musical comedy” in the same sentence, but surprise! Here it is.”

Nunsense tells the story of the five surviving nuns of the Little Sisters of Hoboken who discover that their cook, Sister Julia, Child of God, accidentally killed the other fifty-two members of the convent with her tainted food. With the deceased nuns on ice in the deep freeze, the five singing nuns stage a variety show in the Mount Saint Helen’s School auditorium to raise money for the burials.

Nunsense is the second longest-running show in off-Broadway history (second only to the Fantasticks) and has been produced all over the world in over 26 languages.

Sul Ross Assistant Professor of Choral and Vocal Studies, Dr. Andrew Alegría, is serving as Vocal Director, and pianist Lana Potts is the show’s keyboardist and Musical Director. “Dr. Alegría is doing an extraordinary job working with the actors on their harmonies,” says Scott. “And Lana is an incredible accompanist and musical director. We couldn’t do this show without her.”

Tickets for Nunsense are on sale now in the Fine Arts Building, room 106, or online at www.sulross.edu/tobb. Tickets may also be purchased by phone at 432-837-8218. Ticket prices are $12 for general admission, $10 for students and seniors. Sul Ross students, faculty, and staff get in free with valid ID.

Nunsense opens July 12 at the Kokernot Outdoor Theatre and runs Fridays, Saturdays, and Sundays at 8:15 pm through August 4.