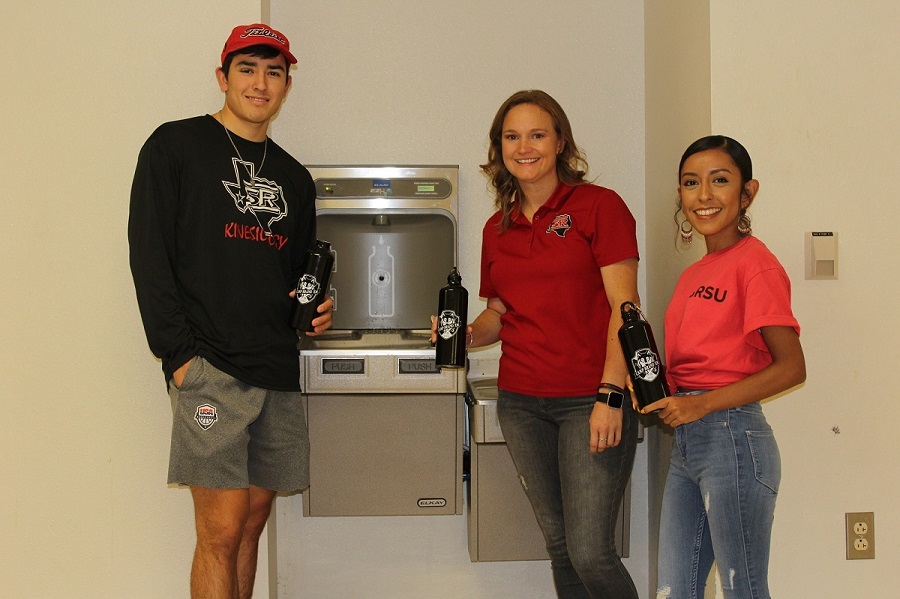 The filling stations, which include the installation of two more units in September, are part of an overall plan to improve campus sustainability.

“These water filling stations are part of a pilot program we’re implementing in response to sustainability issues that were raised,” said Jesse Lara, Assistant Director of the Physical Plant.

Lara added that two units are currently up and running in the lower levels of the Pete P. Gallego Center and the Recreational Sports Center (RSC).

Two additional stations are scheduled to be installed on the second level at RSC and the lower level at Lawrence Hall in September.

Lara said each unit will incorporate a filtration system that will help purify and improve the taste of the water.

“Each station will also have a counter in the top-right corner so every time it’s used it will display how many bottles are saved,” Lara said.

Lara noted that each unit also contains a sensor that initiates and stops the flow of water.

“All folks have to do is place their bottle in front of the emblem where the sensor is located and the unit does the rest,” he said.

Lara also said a “green ticker” report will be shared with the Sul Ross community throughout the year to document statistical data related to the usage of the water filling stations.

Qvarnstrom said key sustainability initiatives were explored and adopted in 2017 as part of an overall strategic plan.

“The faculty, staff and student Sustainability Council has provided leadership for those initiatives,” she said.

“We had a number of concerns that were expressed in a 2019 campus satisfaction survey on sustainability,” said Qvarnstrom.

“Typically, survey respondents do not answer open-ended questions unless they have strong opinions or feelings.”

“But in this recent survey, multiple write-in responses registered support for sustainability efforts on campus,” she said.

To address those concerns, the Sustainability Council worked with the Office of Enrollment Management to purchase water bottles for all students attending the upcoming Camp Brand ‘Em.

“Our students are key in making this a successful sustainability initiative,” said Qvarnstrom.

“They can play an instrumental part in reducing waste, saving money and help provide clean and healthy water that is thoroughly filtered with less chance of contamination.”

According to a 2010 article written by Katherine Sentlinger on livescience.com, between 32 and 54 million barrels of oil were used to create disposable plastic water bottles consumed in the United States in 2007. Eighty percent of those bottles were not recycled, the article stated.