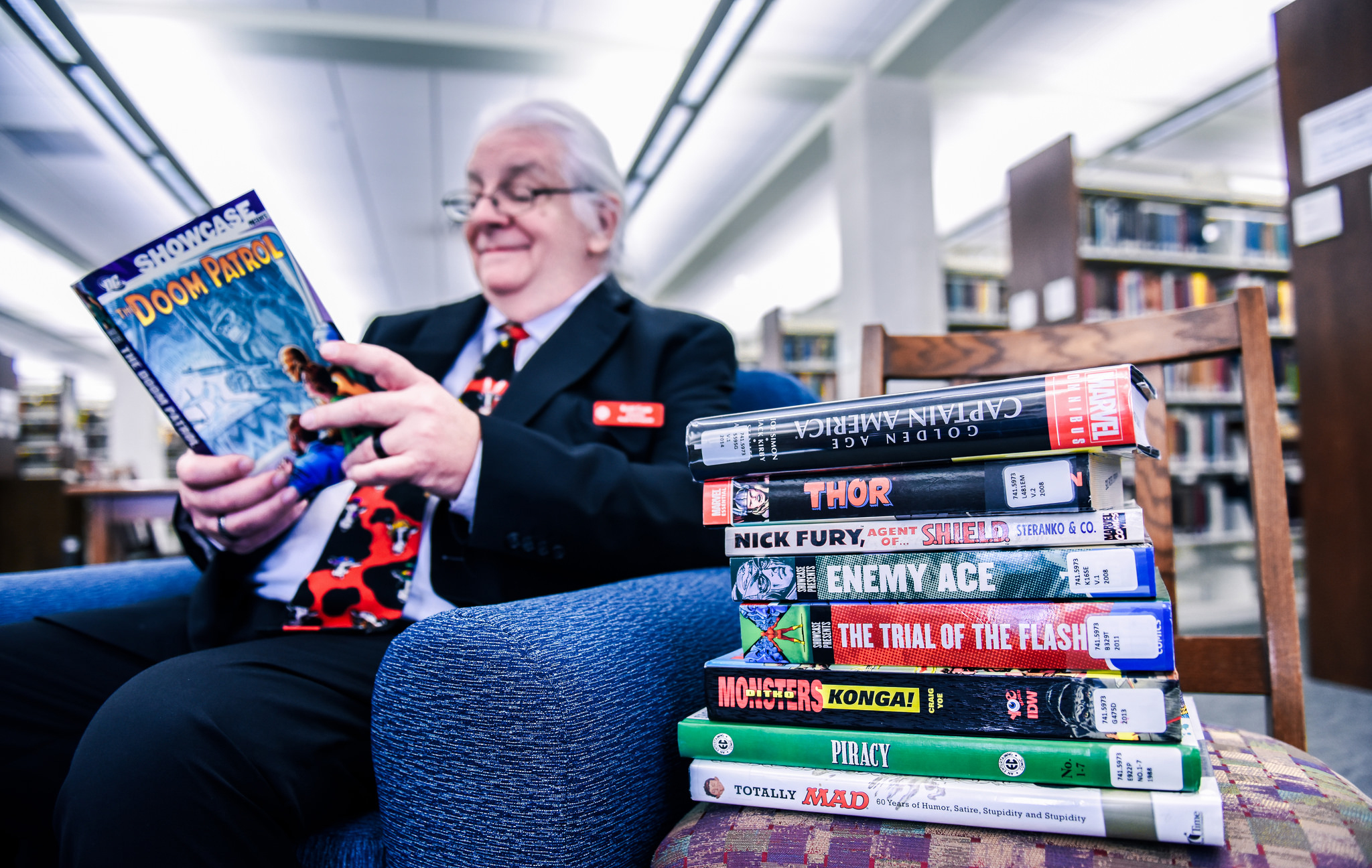 Following his recent donation of more than 400 comics-related items to Sul Ross State University’s Wildenthal Library, SRSU staff member Scott Cupp took a moment to answer some questions about his comics-related background and the inspiration for his literary donation.

What do you consider your hometown?

That’s a hard question.  My family was military, and I moved to Texas in 1962.  I’ve lived in San Antonio (three times), Houston, Austin, Dallas, and now Alpine.  San Antonio was the longest time (23 years) while I was in Dallas for 20 years.  I still have many friends in each.  But, for the purpose of your question, we will say San Antonio.  I finished high school there, returned there after college, got married to my wife Sandi there (in December 1979), and loved it a lot.

What brought you out to Sul Ross (and from where did you move)?

I had been self-employed in San Antonio off and on for five years and following the end of one job I was searching for a position that provided health insurance.  I saw an ad that stated “Audit Director, Sul Ross State University.”  I answered the ad and got my first call within three days.  I did two in-person interviews and suddenly found myself preparing with my wife for the move to Alpine.  I’ve been here just over 2 ½ years, starting May 1, 2016.

What is your primary responsibility as component director of the Office of Audits and Analysis?

I am responsible for the audits of SRSU and the three RGC campuses.

How would you describe your recent donation to Wildenthal Library?

I have a lot of books that I’ve accumulated over the last 50+ years.  I’m an omnivorous reader and collector.  The donation was made up primarily of super hero related graphic novels and collections with some non-fiction related to comics thrown in.  It was 12 bankers’ boxes of material containing over 400 entries.  The new donation (coming in December) will be at least another 12 boxes and will be around 250 individual pieces.

Why did you decide to make the donation?

I periodically go through phases of purging things.  In 2007, I got disgusted and decided to clean out 90 percent of my collection.  Much of the thrill in collecting comes from the hunting of the pieces and the joy of finding something in the wild, but I had too much stuff, and I was buying things simply because I had a collection that it related to.  In some cases, I was never going to read the newly purchased item, and I may not have even liked it.  From my condominium, I sold 19,000 books (hardback and paperback) to one buyer in one day. It took 8 wrapped pallets to get them all out.

Eleven years have gone by and I still have too many things.

Recently, I was at home at night looking for places to put things.  I had one bookcase of comics-related material that was seven-feet high and three-feet wide, and I noticed that I had not read any of it during the previous year.  I’m also over 65 and the end of life keeps staring at me.  I have lost too many friends whose families did not share their passions.  Therefore, I want my stuff to go to people who have an interest or an appreciation for it.

Lastly, I love comics and the Comic Con here at Sul Ross.  I would like to see some Sul Ross professors utilizing this resource for their classes and their class projects.  At the library, these graphic novels and non-fiction works are available to everyone.  Maybe students will decide to come here because of the collection, and they can work on their scripts or their art with the examples of others to help guide them along.

Who do you think would be interested in reading your many donated works?

I have sold graphic novels and comics at two of the three Comic Cons held on the SRSU campus, and I know the students are hungry for them.  There is not a comic shop within 150 miles of the SRSU campus.  But, students love comics.  And I knew that many of them would be interested in some of the books I had.  So I discussed the possibility of a donation with April Aultman Becker, the dean of the Library.  She was receptive to the idea, so I started packing up the boxes.

My experience has been that every comic reader wants to write or draw comics, so the donation provides a variety of styles and ideas that can be used to help people along that path.  It’s not easy, but it can be achieved.  I personally have been published by three comic book companies (Dark Horse, Mojo Press, and Cat Butt Comics).  I made a few dollars but decided I was better off with my prose writing where I have about 25 short stories and over 500 hundred articles and essays out there.

When and why did you first become interested in comics and graphic novels?

My mother read to me a lot as a child, and I bought comics from an early age.  I recall making a purchase around 1959 (there may have been earlier purchases), and I continued on.  It was a great time to be reading.  The “Silver Age of Comics” began in 1959, so I was there to see many of the heroes I would love come into existence.

I have had four core collections.  I lost my first set with early Fantastic Four, Thor, Justice League, and other comics in 1962 when they were stolen from the family car as it was shipped from Fairbanks, Alaska to Seattle.  My second collection was sold in 1969 (for two cents a book!) when my mother declared that the comics were not going to be moved again.

I started another collection in college which I sold in 1975 when my car was broken down and needed repair.  I did not start collecting again until about 1983 when my wife bought me some trading cards featuring Looney Tunes characters.  I went to find more of those and ran into a local comic shop which was very accommodating to me.  I started buying a lot of books.

We moved to San Antonio in 2000 and I found a very nice comics store nearby.  I bought from them until 2010 when the owner sold his store and the new owner ran into trouble and closed up shop.  At that point, I no longer regularly bought comics; although, I continued to purchase graphic novels up until this year.

Do you have any particular favorites among the donation?

I am very fond of the Marvel titles from 1962 to 1969, when Stan Lee was in his prime and there were not that many titles published each month.  I also like many of the DC characters from the same period.  Among my favorites were Spider-Man, Thor, Green Lantern, Hawkman, The Atom, and Swamp Thing.

Were there any particular titles that were more difficult to let go of than others?

Quite a few.  But, as I was making up my mind to do this, I realized that they were not going away.  They are about 100 yards from my office (in the Briscoe Administration Building), and I can go visit whenever I want to.  Some titles I have decided not to let go of, because they are signed to me.  For example, I have DC Archive editions of the early Golden Age Green Lantern and the Silver Age Green Lantern.  Both volumes are signed by the artists (Martin Nodell for the Golden Age one, Gil Kane and Murphy Anderson for the Silver Age).  Those stay with me.  Similarly, the 1980’s Swamp Thing.  I had met artist Steve Bissette at a convention, and he drew a full-page illustration of Swamp Thing rising from the swamp with the notation “For Scott – Be sure to read your vegetables!”  That is not going anywhere for a long time.  The Disney stuff was also hard to let go of.

I met many artists and writers over the years so many of them have wonderful connotations in my memory.  My wife and I were friends with legendary DC editor Julius (Julie) Schwartz, who edited Showcase #4, the first appearance of the Silver Age Flash, considered the first Silver Age comic.  I also met Stan Lee back in the 90’s.  I had gotten a Marvel “No Prize” from him in 1967, and he was amazed when, years later, I had him sign it and the original envelope it had come in.

What will your upcoming donation include?

I am finishing a second donation that features many newspaper comic strips, like Li’l Abner, Dick Tracy, Terry and the Pirates, The Phantom, Steve Canyon, and many more.  There are some big slipcased volumes including The Far Side, Calvin and Hobbes, Dilbert, Mad work by Don Martin and others.  And one huge volume that includes early Sunday strips from Walt and Skeezix, which evolved into Gasoline Alley 100 years ago.  However, I kept my complete Bloom County and Berkeley Breathed stuff, since some of that is signed to me.

Do you have an estimated value of your combined donations?

How do you respond to people who say they just don’t think they’re interested in comics and/or graphic novels, or they’ve never tried to read those type of works?

I generally say ‘To each their own.’  I’m not crazy about romance novels or hip-hop; I appreciate those who are.  But if you are interested in popular culture, satire, super heroes, fringe artwork, or observing various aspects from daily life and culture of the last 100 years, you can find it in these books.  I learned a great deal of history and trivia from these books as a kid on up into my mid-60s.