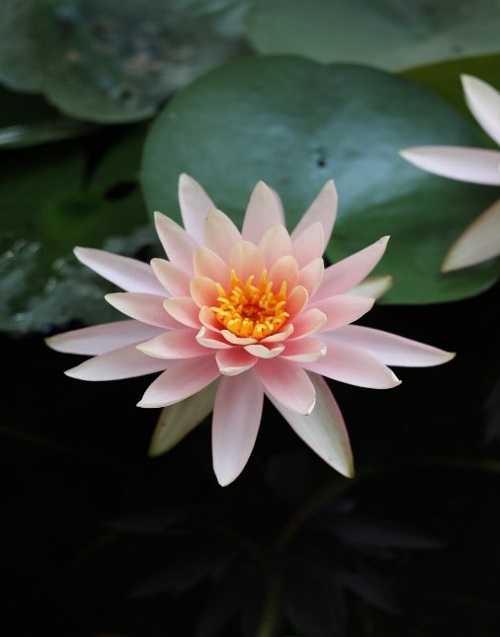 One never really knows quite how to begin a story about themselves.  I, for one, am one of those.  Maybe it is because we don’t think that we have a very interesting story to tell, let alone one that could fill the requirements of an essay.  It could also be because we think too much into who our reader is, and, if it’s a snoozer, they might fall asleep, too.  I hope you don’t fall asleep, but, if you do, I apologize in advance.

I grew up in a loving home.  It was a home plenty big enough for my three siblings, my parents, and I all to live comfortably without falling over one another.  We each had our own room and each room featured a small snippet as to who we were at the time.  My mother was a stay-at-home mom who kept a tidy house and always had a delicious, home-cooked meal for us at night.  My father was a rancher, and it seemed like his day was never fully done.  As for my sisters, they were your typical kind.  The oldest was super smart and a know-it-all (shhh, don’t tell her I said that).  My little sister was far younger than I, so, sadly, I don’t recall much of her, other than she would snitch on us every moment she could.  Then, there was the baby of our family, my parents pride and joy—the only boy.  He was adored by all and completely W-I-L-D.

We were not the Cleavers, by any means.  There was drama here and there (how could there not be with four women in the house?)—nothing out of teenage ordinary, though.

My dad spent as much time with us as he could and my parents had a typical marriage, I thought.  Mornings were interesting.  My mother was not a morning person (she still isn’t to this day), so my dad would always, “poke the bear.”  He’d get her all riled up, then toss all of us kids one of his big-grinned, smart-ass smiles.

You must be asking by now, “Where is this story going exactly?” I hope that you are not dozing off on me, yet.  I feel that it’s important to know that I was not suffering from “daddy issues” or that I did not feel unloved in any way.  It’s easy to blame one’s upbringing as the reason why they are who they are.  In my case, though, it’s not the answer.

I had a failed marriage.  My dad tried to talk me out of it, but I was insistent that it was what I had to do.  I blame it on being young at the time, and, to this day, that is very much still how I feel.  After the divorce, I dated a few guys—some good (who am I kidding, none of them were really good).  They all had drinking issues.  I’m so embarrassed to admit this but porn addictions as well.  It would absolutely disgust me to no end once I would find out.  It constantly left me in a state of feeling gross.  I would look in the mirror with tears rolling down my face, You’re so fat, Barb. You’re disgusting.  You need to be blonde.  Use more eyeliner.  Learn to do your make-up right.  These were just a few of the awful things I began to ingrain into my self-conscious.  I believed that, if I completely changed me, he would love me and not need that degrading vice anymore.  I was wrong, so very wrong, each time.

I will never forget the day I met my ex-fiancé.  He was strikingly handsome (to me, that is).  My grandma thought the same.  I always carried her opinions very near and dear to my heart.  He drew me in with his rumbling voice and boisterous laughter.  This is it. Thank you, Jesus. A good man, finally.  Little did I know at the time that this man would make me into the strong woman I hold myself up to be today.  He is the one who would teach me that true strength comes when you feel that you have not an ounce left in life to give and that, if you were ever going to survive, you’d have to be tough.

Even writing about him now runs shivers up my spine and an immense anger filled with pure hatred emerges from the depths of my body.  It feels hard to breathe; my throat gets tight. I swallow back hot tears that begin to form in my eyes.  I swear that I can see red when I think back.  I can feel the fear of seeing his headlights come down the road and the sound of his truck shutting off at night when he would come home reeking from the stale stench of whiskey, beer, and loose women.  I would sit by the bedroom window shaking, listening to the sound of his truck coming down the highway, then it slowing down to not miss the turn into the driveway.  I’d run to bed, pretending to be heavily asleep, taking deep breaths to calm my nerves as I waited for what new hell would come this night.

I can think back to a handful of times that I would hear stories about women like this. I’d say, “God, that woman is so stupid!  Why doesn’t she just leave?”  I mean, it’s that simple, right?  Just leave.  It’s not that simple, though.  You can’t “just leave.”  By the time you realize that you are that woman, your self-esteem has already been stripped away.  Any confidence that you once had has been stolen from you.  You feel alone, stupid, ashamed and completely worn-out from all of the fighting.  You pray every night for strength to get through another day and for him to leave a physical mark so that maybe you can finally have your way out.  Men like him are smart, though.  They don’t dare leave marks.  Men like him do something more powerful than that.  They know the power of an abuse much greater than any slap to the face.  You see, physical abuse can put them in the slammer most times, but verbal abuse leaves no evidence of the monster they are.

It took me an especially long time to find out what I was undeniably made of.  I lost friends along the way.  I even lost my family for a few heartbreakingly-long years.  I was broken, filled with rage, a self-destructive train-wreck.  I found out who my real friends were, and, with the love from these strong role models, I learned to slowly build myself back up.  After I finally left him for good, I lived in fear every day that he would find our new home.  I can’t tell you the countless phone calls and texts I received daily.  They always began so endearing, with him begging me to come back.  Then the messages would take a wicked turn to aggressive and belligerent words.  He told me that I was crazy, that he never hurt me, and it was all made-up in my head.  I was in the wrong, and he only tried to make me a better person.  He did do this, I will admit.  When you hit rock bottom, all you have left is your determination to reconstruct yourself into a much stronger, much smarter, more powerful woman.

The one thing I want from this experience is to make a difference to a woman who is going through abuse.  I want her to know that she is not alone and not to feel ashamed, that she is stronger than she ever thought she was.  I pray for her to find her inner-strength, as well.  In times of utter darkness when you feel that all hope has been lost, be like the lotus.

I came across an unsigned poem in one of my many times of despair.  It is one I discovered on Pinterest; it really hit me and made a statement in my life.  I hold it very close to my heart.  It comforted me in my times of darkness and gave me hope in times of vulnerability and frustration. 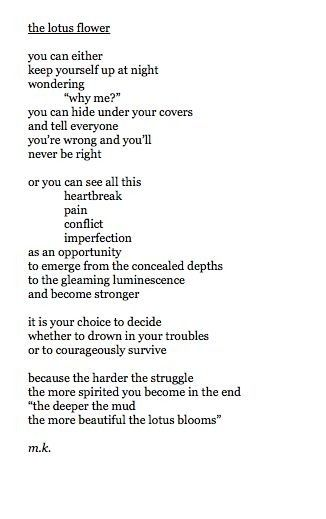 If you feel that you may be a victim of domestic violence or abuse, there is help available on campus, as well as here in Alpine.  You will be kept completely anonymous.