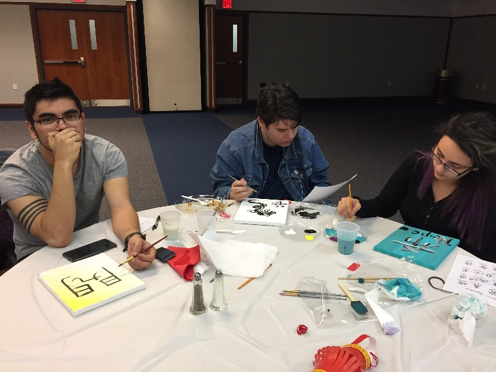 On Friday, February 7th, a celebration for Chinese New Year was held in the Espino Conference Center in the Morgan University Center. To start off the event, a presentation was shown to offer students some insight about the origins of and festivities surrounding Chinese New Year. Sul Ross students took great interest in the Chinese zodiac and in determining each attendants sign, as the Chinese zodiac goes by the year instead of the month and is attached to the symbol of different animals. Do you know what your Chinese zodiac animal is?

The PowerPoint presentation outlined how Chinese New Year is celebrated, allowing attendants to join in the celebration while also learning more about Chinese culture. Some interesting facts that were discussed include the following:

*Chinese New Year is also known as the Spring Festival;

*Chinese New Year does not have a set date and can last from January 21st to February 20th;

*The decorations for Chinese New Year are mostly all red;

*People become a year older on the occasion of the Spring Festival.

After grounding students with some facts, the celebration focused on fun and instructive, hand-on activities everyone enjoyed.

Canvases and paint were handed out, along with a page with many different Chinese words from which to choose. Some of these words included “courage,” “hope,” “love,” among others. Some students struggled a bit to get the words down, but others proved naturals! Learning to write in Chinese served as a completely unique experience for those of us who have never tried to write in Chinese before.  It is an expressive and artistic form of communication quite unlike the papers we type for comp classes!

As if learning about culture and writing in Chinese wasn’t enough fun, then came the food.

An Amazing Buffet of Chinese Food

Attendees lined up along the rotunda of the Morgan Center to fill up their plates with some seriously delicious Chinese food and desserts including tofu, noodles, spring rolls and an Asian chicken entre. The Disney animated movie, Mulan, played for viewing entertainment while everyone enjoyed their meals.

Dinner and a Movie

The night ended with prizes awarded in a blind ticket draw. While many lucky students won from a variety of prizes in the drawing, the real prize was the event, which  brought students from different cultures and backgrounds together to enjoy and learn about China and its culture.

Celebrating the Day of the Dead: in Ojinaga, Chihuahua

Roving Reporter, Part One: Ah, the Mysteries of Love