“After much reflection and discussion with family and friends, I have decided to step away from my responsibilities as president at the end of the academic year,” Gallego said in a prepared statement issued by Texas State University, which Sul Ross is part of. “This is not an easy decision, but it is the right decision for me and for Sul Ross, the university I dearly love.”

Gallego’s tenure was marred by controversy as he managed difficult financial decisions that resulted in faculty layoffs and department reorganizations. But Gallego received high marks for his management of the crisis surrounding Covid-19, despite a challenging political environment in which Gov. Greg Abbott banned mandates involving masks and vaccinations. As of Nov. 12, there were no active Covid cases at the school.

By all accounts, he is a popular figure with students, but a lightning rod for criticism among some faculty, primarily for the layoffs and reorganization.

“I came here to help set Sul Ross back on the right path,” Gallego said in a weekly message to SRSU staff, first reported by the Skyline, “And, though many of the decisions were difficult and caused some angst on our campuses, I know they were the right decisions to make. How we had been doing things before was obviously not working.

“It was clear that a different road forward was necessary.”

Texas State University Chancellor Brian McCall said in a prepared statement that Gallego informed him Friday of the decision.

Gallego’s decision will certainly complicate or suspend the university’s search for a new provost, which has been narrowed down to Bernardo Joaquin Canteñs and Alberto Ruiz., both of whom were scheduled to visited the campus this week to speak with students and staff.

Gallego, a former member of the U.S. House of Representatives, attorney and Alpine resident who provided much of the funding for the new athletics facility, was appointed president in June 2020.

LOBO Madness; the Start of a New Tradition 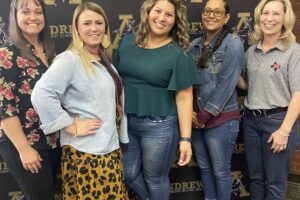