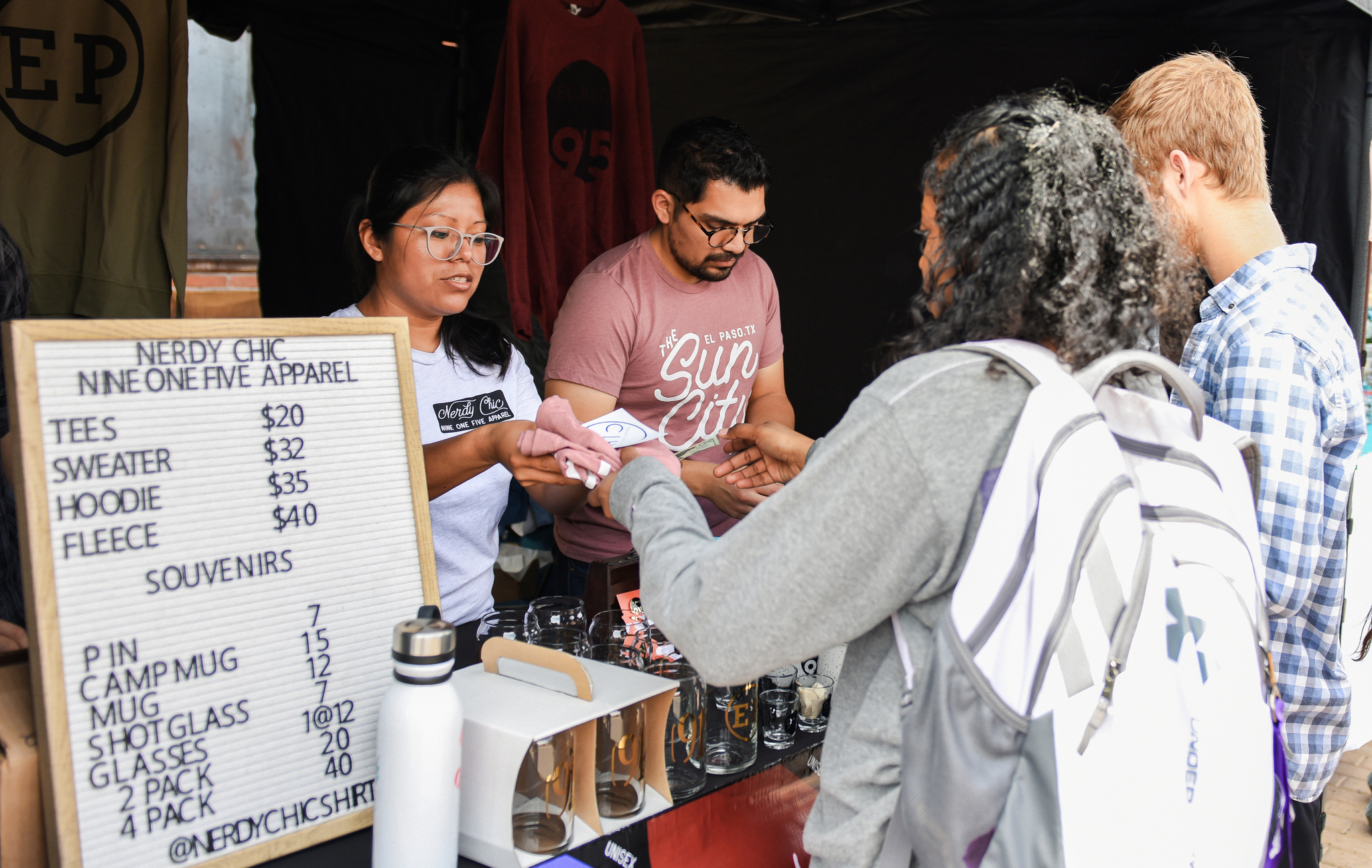 When Juan Aguirre enrolled at Sul Ross, like many Lobos he decided to fill some of his free time with a student job.

“I applied at the library and print shop to help pay for school,” he said.  “They both offered me a job, but the print shop called me first.  So that’s where I went.”

After doing his share of pamphlet folding, Juan’s supervisor, Coordinator of Publications Services Lauren Mendias, asked him to do some design work.

And the initial results were . . . not ready for publication.

“It was terrible,” he said with a laugh.  “But she encouraged me to try it again, and the second time I did much better.  That’s when I realized I really like design.”

Despite that discovery and getting to do more design work at the print shop, Juan stuck to an academic track which led to a bachelor’s degree in criminal justice in 2012.  He then moved to El Paso and leveraged his degree into an entry-level position at the El Paso County District Attorney’s Office.

In 2013, he was joined by his girlfriend Miriam after she completed her Sul Ross bachelor’s degree in Spanish with a business minor.  The pair settled down to full-time jobs and what appeared to be a comfortable, post-college plan.

But like Juan’s first attempt at design, the life they were busily building seemed rushed and incomplete.

“I suffer from anxiety,” he said.  “And after a panic attack in 2016, I realized I had become too comfortable at my job, and that I wanted to do more than just paperwork.  I wanted to work on what really made me happy, and that’s design.”

“We decided to go with our minimalist El Paso designs to show love to the city we were living in.  And it helped our designs stand out from the other area printers who focused more on satire,” said Juan.

The couple saw their t-shirt sales grow rapidly—a development which made their apartment-run business a challenge.

“Our initial obstacles were equipment costs, and of course the space.  We lived in a one-bedroom apartment, and the printing equipment took up more than half of the 740 square-foot space,” explained Juan.  “Managing our full-time jobs while figuring out how to work and maintain the equipment on a limited budget was difficult, but we learned as we went along and the business kept growing.”

After first year sales of nearly 300 items, Juan and Miriam sold over 2,000 items last year, having purchased more advanced equipment to improve their production efficiency.  They have also expanded beyond t-shirts to sell souvenirs, glassware, and cold weather apparel.

Now working out of their Horizon City house, the couple have their bedroom back and an eye towards even greater business expansion.

“We see this becoming a full-time business within the next two years,” said Miriam.  “We’ve already been looking at places in downtown El Paso to have our own brick and mortar location.”

Last September, just before their nine-year anniversary as a couple, Juan and Miriam got married.  These Lobos who met as student volunteers in the Sully Productions office have quickly produced a post-college business success.  And they both point to experiences at Sul Ross as playing vital roles.

“My time working at the Sul Ross print shop really helped me get into graphic design and helped me develop the necessary skills to design our shirts and figure out the printing equipment,” said Juan.

“My minor in business administration prepared me for the record-keeping aspect of our business,” added Miriam.

Nerdy Chic: Nine One Five Apparel products are currently sold online at nerdychicshirts.com and in-person on most Saturday’s at El Paso’s Downtown Art and Farmers Market.  Customers who purchase items are not only supporting Juan and Miriam’s business venture but other local entrepreneurs as well.

“We did a series of shirts designed by El Paso graphic artists, and they get 25 percent of the sales,” said Juan, who then pointed to another vendor at the El Paso Market.  “And we hired that printer to make the stickers we now sell.  Also, our glassware and mugs were printed by El Paso Beer Club.”

“The Farmers Market actually requires you to prove that your goods are locally made or finished,” added Miriam, “which is one reason we like to sell here.”

Although their products are local, their product reach has already gone global as attested to by customer t-shirt photos from places like Paris, France and on top of Guatamala’s famous Volcán de Fuego.

“We’ve seen our shirts around town,” said Juan.  “One was on a guy standing right in front of me at a restaurant.”

With short-term plans to expand product offerings, and medium-term plans to move to a brick-and-mortar operation, the couple may eventually create a long-term plan to move their business closer to a familiar Sul Ross campus.

“I’d like to live in Alpine again,” said Miriam.  “The scenery around the University is very beautiful.  There’s nothing quite like it.”