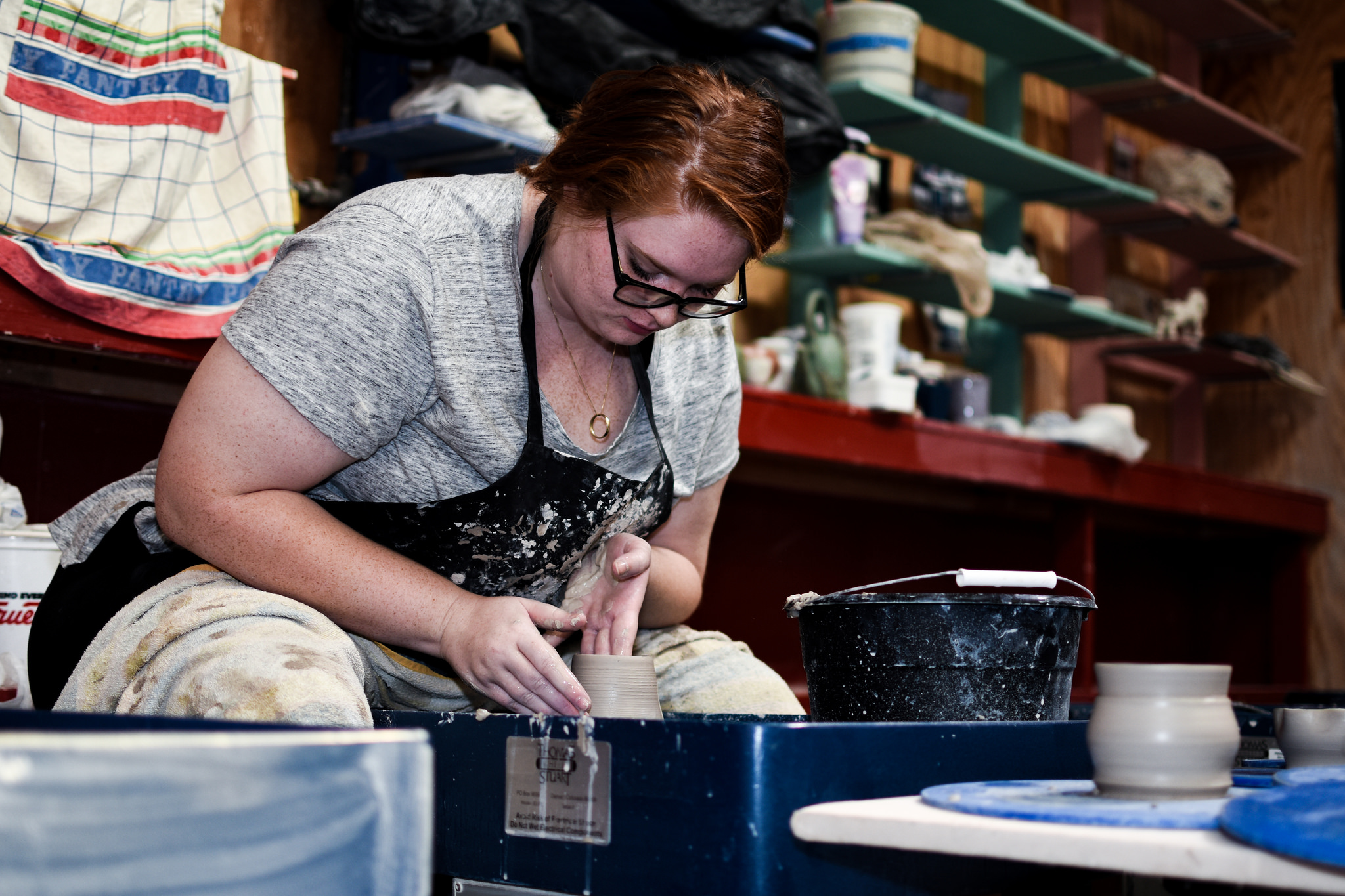 “I have struggled with anxiety since I was very young,” said the 20-year-old Sul Ross senior.  “At the age of five, I was in constant worry.  I don’t think I realized that these fits of worry and panic were anxiety until I was in about seventh grade and had to start taking medication and seeing a therapist.”

Alongside this constant problem of childhood worry, a constant solution appeared in the form of making art.

“I always colored and drew flowers when I was a child and found that the days we went to art class in elementary school were always my best and happiest days,” she said.

“So I took art classes as much as possible.  One year in high school, I even took three at the same time: art history, advanced art, and Advanced Placement Studio.  And slowly the art classes replaced my need to take anxiety medication.”

Plowman’s success at relieving anxiety with artistic expression made her wonder if others suffering from stress could experience the same benefits.

After being accepted into the McNair program last November, she began researching previous studies on the subject and found a 2010 clinical study which showed artistic activities not only reducing stress but even improving cardiovascular health.  Plowman decided to undertake a new study, this one outside of a clinical environment.

“Clinical studies are set on their sample population and only want to test individuals who characterize themselves as anxious or who have been diagnosed with an anxiety disorder,” she explained.  “I wanted to study a more general community population.  So many people are afraid of art and painting, but they haven’t considered the possibility of art as therapy.”

The study involved eight small-class sessions and 92 total volunteers, including both college students and area residents.  With a PowerPoint slideshow for guidance, the volunteers were taught how to paint a cactus and also asked to answer a questionnaire before and after making art.

“If they wanted to move forward or backward they were allowed to move at their own pace,” added Plowman.  ”All individuals were encouraged to use their own creativity and were not forced to follow every instruction.  I wanted them to not be stuck inside of a box.  They were allowed to change the colors or the shapes or paint a different cactus if they so wished.”

The study showed many, though not all, participants experienced a decrease in stress following the artistic intervention.

On the open-ended portion of the questionnaire, one study participant wrote, “I’m not good at creating things, but I love it” because it provides “happiness, calmness, and stress relief.”

Another participant wrote, “I’m creative but it’s not as easy to express myself or my ideas . . . I felt really calm.  I’d like to try this on my own in the future, without a template, so my perfectionism doesn’t take over.”

Although some participants actually experienced an increase in stress during the painting activity, Plowman thought that might be the result of an already relaxed environment.

“In Alpine we are all so calm here,” she said with a laugh, adding that she plans on doing further studies to hopefully better demonstrate the stress-relieving power of artistic expression.

“It’s something that I’m passionate about, something that has helped me so much that if I could expose more people to art’s therapeutic potential, then I’ve done my job.”

Click HERE to see a photo album of Kaylee in the studio.