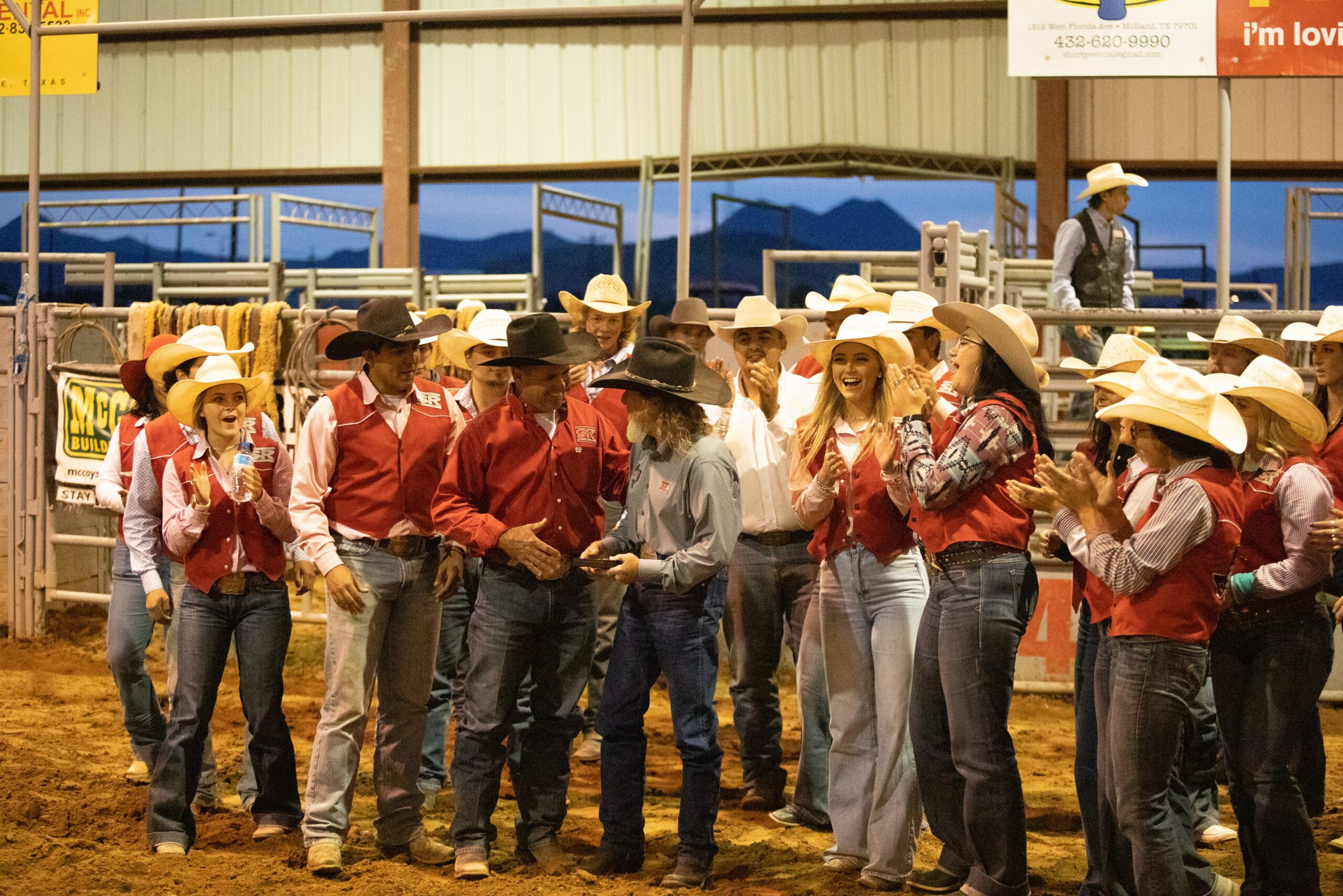 Alpine, TX – The 2021 College Rodeo season got under way at Eastern New Mexico University in Portales boasting the largest number of contestants and breaking SRSU’s record set in 2020.

Senior and 2018 Junior NFR World Champion Saddle Bronc Rider Brandon Lansford claimed the top spot in what he does best. Turning in a 157.0-point total, he topped Tarleton State’s Jake Vance and West Texas College’s Damian Brennan. Lansford was able to put it away with an impressive 80-point ride.

“In the first round when I got my draw, I realized that it was going to be a rematch from one of my previous summer rodeos,” noted Lansford. “I was really looking forward to the horse I had drawn. I knew he was going to have a big rear out and then cut straight down the pen allowing me to pick up some good points if I could stick with him.” He had great confidence going into the short round even though he wasn’t very familiar with the horse. After it was all said and done, the horse offered up a great opportunity for him to dig in deep and win the saddle bronc title.

Other placings included Zachary Hamar, who posted 3rd in steer wrestling with a 9.1 second total. In the goat tying, Timmi Hutchings came in 8th with a total of 21.7 seconds. Sul Ross left ENMU in 7th place in both the men’s and women’s team standings while Western Texas College earned first followed by second place Texas Tech and third place South Plains College.

Then it was straight back to Alpine to prepare facilities and get some practice time for the upcoming home rodeo hosted this past weekend.

Come Thursday, it was easy to say on paper that this was about to be the largest collegiate rodeo. It was easier to see it. There was hardly an open space left as trailer after trailer poured in outside of SALE Arena. A total of 17 schools and their supporters showed up and competitors in much of the slack numbered in the triple digits.

Despite the sheer number of competitors, Sul Ross came away with some huge wins. Tristen Hutchings earned the Men’s All Around with a total score of 240.0 thanks in large part to winning bull riding with a 166.0 total. Hutchings also placed 6th in steer wrestling which included a smoking 3.8 second run.

Lansford is 2 for 2 so far this season as he was able to follow up his showing at ENMU with a 164.0 total in saddle bronc to claim the title here in Alpine.

“I was super excited for the horse I had. I’d seen multiple friends and competitors get on him and had hoped to have a chance to ride him and was finally given the opportunity. Although I had scored 80 points I was still sweating through every slack and performance unsure if I would hold the lead in the first round since I had ridden so early.”

The horse he drew in the short round was one he had seen the night before which an Odessa bronc rider had ridden. Lansford knew he had drawn a worthy opponent.

“It was no doubt one of the hardest battles I’ve had to fight yet was one of the best rides… I have made and I am super excited for the way things turned out… I am also glad I was able to keep the -SR- bronc riding buckle here in alpine where it belongs,” Lansford said.

On the women’s side, Kathi Norell finished 6th in breakaway roping with a 14.5 combined score. In goat tying, Timmi Hutchings and Haddley Kibbe came in 4th and 7th, respectively. The Women’s team finished 8th at their hometown rodeo.

The Sul Ross men’s team finished 3rd, moving them up to 3rd in the overall standings for the Southwest conference with a 570-point total. They are currently chasing Tarleton State for 2nd place with 605 points.

It’s off to Vernon College this weekend for the Lobos as they look to build on the early success they’ve earned in the young season.