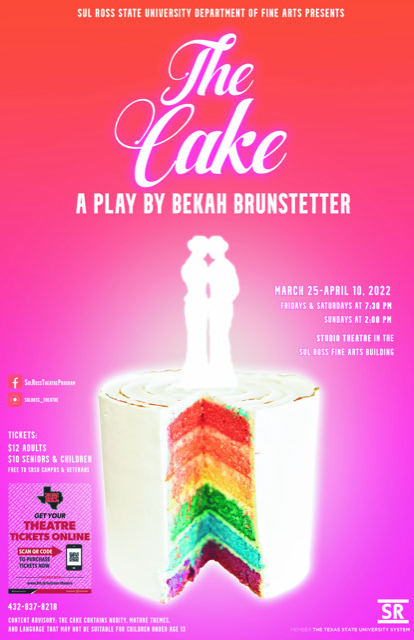 Alpine, TX – When Della, a sweet-natured Christian baker, is asked to make a cake for a gay wedding, she’s forced to re-examine her beliefs and definition of love. This is the story of The Cake, a comedy by Bekah Brunstetter, presented by the Sul Ross Theatre Program and opening March 25 in the Studio Theatre.

The Cake was first produced in 2017 by the Echo Theatre Company in Los Angeles. The Cake opened its off-Broadway premiere in 2019 at the Manhattan Theatre Club. Brunstetter, writer and producer for hit NBC show “This is Us” and the Starz series “American Gods,” was inspired to write The Cake during the Masterpiece Cakeshop v. Colorado Civil Rights Commission Supreme Court case and by her own father’s opposition to same sex-marriage, a view with which she disagrees. Brunstetter’s other plays include F*cking Art, I Used to Write on Walls, Oorah!, and Going to a Place You Already Are.

“The Cake deals with issues of religious freedom and same-sex marriage from a very personal perspective,” said director, and Associate Professor of Theatre and Communication, Marjie Scott. “With news articles and court cases, it’s easy to take sides based only on our own beliefs, but when the issue touches us in a personal way, it’s a lot more complicated. The play is also hopeful and funny, which is refreshing in these polarized times.”

The Cake runs weekends March 25 – April 10 in the Studio Theatre on the Sul Ross Alpine campus. Performances at 7:30 pm on Fridays and Saturdays and 2:00 pm on Sundays. Tickets are $12 general admission, $10 for seniors 65+, and free for veterans and active military. The Cake contains mature themes, language, and partial nudity. Parental guidance recommended. For tickets, contact finearts@sulross.edu or call 432-837-8218.

Order tickets online: www.bit.ly/sulross-theatre
SRSU students, faculty, and staff may reserve their tickets online there as well. Please keep our phone number and email address on the press release in case patrons have questions, but for tickets, we’re encouraging folks to buy them online.