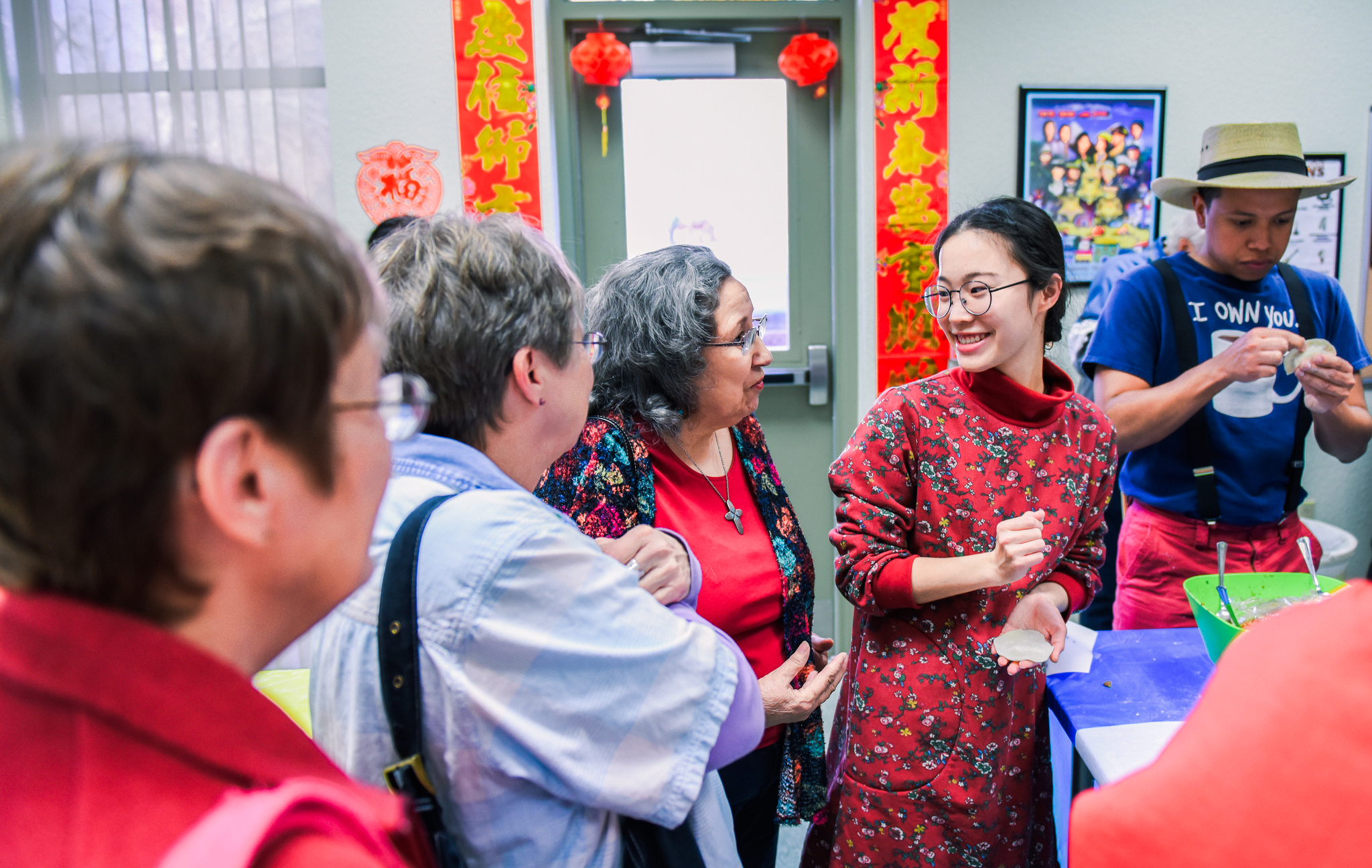 Editor’s note:  Xueqing Mi is a Sul Ross international student who hails from China.  The following is a reflection on the contrasts between her Chinese university and Sul Ross.

At my Chinese university, I walked on campus holding a heavy folder in my arms.  The wind in February gave me the warm feeling of a spring breeze on a sunny day.  Swim class had been released.  I was walking with my roommate and wiping my damp hair at the same time.  We were headed to the cafeteria when my stomach began talking . . . .

“What’s for lunch?” I asked my roommate.

“I’ll have seafood noodles, EMM, and a tea egg,” I replied, looking forward to the tastes.

“You want everything,” I quipped.

As we approached the cafeteria door, I heard an unexpected yet familiar language—English.

I came back to reality from my musing memories, imperceptibly.

I walked into the Sul Ross classroom and looked at the familiar yet unknown faces.  August, September, November . . . I silently counted in my head to the sixth month.  I have been here for six months.  I left my familiar Chinese campus seven months ago.  My new surroundings—friends, teachers, and, of course, classmates, are all different.  How have I changed?  I somehow feel I have changed a lot and yet not at all . . . .

Many Sul Ross friends ask me what my university in China was like.  Mostly, all I can think to say is “very different.”  I have a lot to say, but what I reply is basically that my Chinese university had a lot more students.  However, that is just a fact and not the essence of my life there or here as an international student.

In September 2015, my parents sent me to a Chinese university with a car full of luggage.  For the first time, I left home to live alone.  My parents wanted me to take countless things.  They wanted to make sure that I was prepared for life on my own.  So, they packed the suitcases with everything from bedding to a screwdriver.  I entered the school gates and looked at the vast square and magnificent buildings.  Everything was fresh in my eyes at that time.  I was excited to find my department, to check in, and to get the key to my dorm.

One, two, three, four, five, six beds—five beds with stuff on them.  A couple of the girls and their parents were unpacking.  I said hello to them with a smile for they would be my roommates with whom I must get along in the future.  We six girls from five different cities spent our first day at college together with care and curiosity.  Then, before formal classes began, we took part in military training.  This training under the hot summer sun was very tiring, but it also made us quickly get familiar with each other and become friends.

The male and female student dormitories at my university were not in the same building, and in fact, not in the same area at all.  The boys’ dormitories were located at the west end of the school, and the girls dormitories were on the east end.  Each of these buildings had dormitory administrators whom we called “aunt” or “uncle.”  They were in charge of the dormitories in all things, big and small.  Girls’ dormitories were locked at ten p.m. and boys’ dormitories at eleven p.m.  After the dormitory door was locked, students had to ring the doorbell to get out and then possibly face punishment from the aunt or uncle.  One of the fun things about sleeping in a room with six people was that, when the lights were turned off, we always had something to talk about.  We called it bedtime talk.  We used to lie in bed staring at the ceiling in the moonlight and tell funny stories about our childhoods, ghost stories, and discuss the boys and girls in our class.  It was an important way to get to know each other.  It was as if, in the dark, it was easier to say what was on our mind.

Every semester in China, there would be some activities hosted in the dormitory, such as the dormitory culture competition.  We made a lot of effort to get a good ranking.  Chinese universities had the same courses for the same major, and the curriculum was arranged by the school, which is very different from American schools.  Students here have more freedom to choose their own schedules.  At my university in China, each department had its own uniform, and everyone wore his or her uniform whenever the school held big activities.  The six students in our dormitory were all in the same major, so we took all the same classes together.

During freshman year, we had to get up at six in the morning to gather together and run, all of us in a hurry to brush our teeth and wash our faces.  Each class had its own slogan; we had to shout the slogans when we were running.  After that, while yawning, everyone dragged their tired bodies to the canteen to eat breakfast.  After breakfast, at 7:20, all freshmen had to go to the classroom for morning independent study.  Then around ten o ‘clock in the morning there was a break for exercises.  For this, we were arranged into our different classes, and everybody exercised to music, still wearing the same uniform.  Schools had a special department that was responsible for checking whether students exercised seriously.  At seven o’clock, after supper, all the freshmen had an individual evening study class.  When I became a sophomore, I stood in the window of the teaching building and looked out with a great deal of nostalgia while watching the new freshmen.  The life of a freshman-year student at Chinese universities is very busy; although not significantly different from high school, except with less homework and fewer exams.

The school library’s study room in China was always crowded.  In order to get a seat, students waited in line outside the library before it opened its the doors at six a.m.  This happened frequently before important exams, like the qualification certificate and the graduate entrance examinations.  The hallways of the school library were filled with students reciting textbooks, and I was once one of them.  I had even seen students lock the desks and chairs together with a chain when they went for lunch in order to save their seats; however, this was later banned by the school.  You may wonder why everyone had to cram into the library to study.  First, many students were not locals and could only live at the school.  Second, it was difficult to find empty classrooms; many classrooms had students attending classes.  Third, it was hard to concentrate on studies in the dormitory because so many others shared common space and the dorms offered no self-study rooms. The manner of instruction at my university classes in China was not very different from my classes here—again, there were just more students.

Of course, learning was not the only task at Chinese universities.  We also had various activities, clubs, sports meetings, and parties.  I liked to take a walk with my friends on the campus in the summer evenings.  The playground was full of young people, some running and some playing football.  The dance club of the school would organize dancing parties every weekend, which is also one of the fragments of my Chinese life I miss most.  Almost every university has a snack street around it, full of restaurants and food shops at which students could never get tired of eating.  When I wanted to relax after a day’s class, I went shopping with three or two of my friends.  In the summers, there were also night markets.  (Interesting fact: night markets originated in the Tang Dynasty more than 1,000 years ago.)  While eating snacks at the market, my friends and I would choose our favorite clothes and small items to purchase.   By the end of the night, we were satisfied to be back in the dormitory for rest.

I miss many things about home: the green paths full of birds, the three distinctive school canteens, the campus store, the cup of sweet watermelon juice after the sports tests, and the memory of the afternoon we chanted for our classmates during the School Olympic Games.

Sul Ross State University is quite different than my Chinese university.  For example, Sul Ross’ small campus makes me feel as if all of the students at the school know each other.

Another difference is in the living arrangements.  When I first checked into Lobo Village 1, I was surprised because I saw some boys walking in the hallway.  I was even more surprised when I entered my dorm room, because there were not only two separate rooms, but also a bathroom and a living room.  Here, I have had no bedtime talk with my roommates, nor is there the lively atmosphere of six people living together; however, I now sleep better in my own room.  It’s also nice to invite friends to watch TV in the living room when we are bored.

The contrast in student schedules between Sul Ross and my Chinese university is as stark as is the amount of space.  Sul Ross students have more freedom to arrange their own time for studies and to go to the gym for exercise according to their own schedule; I like the gym here because I find opportunities to play all kinds of sports.

Additionally, Sul Ross has much more space provided for studying.  And what I especially like is the Tutoring and Learning Center.  That resource has helped me a lot.

Being away from home can be shocking, but the separation allows me to realize the cultural differences between China and the U.S.  And it helps me appreciate home through the lens of an international student, through time and space.