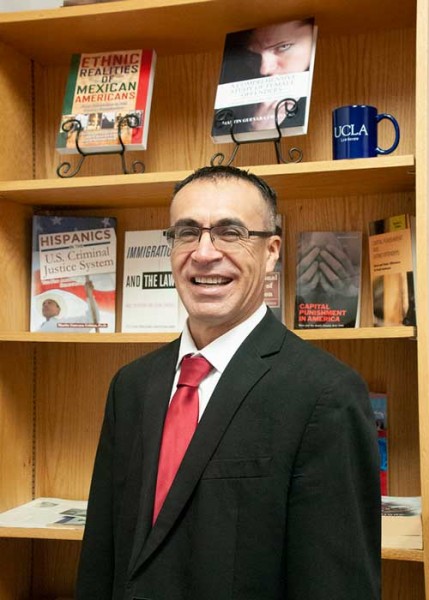 Requirements to be considered for the prestigious award include full professor rank plus 10 years of service at Sul Ross State University. Nominees must demonstrate a record of distinguished achievement in teaching, scholarship, and service to the community, state, and nation. In addition to the Distinguished Faculty designation, recipients receive a cash award, a special medallion, and a gift.

Dr. Jim Case, Sul Ross Professor of Political Science and Public Administration, said, “Dr. Urbina represents the best of Sul Ross. He is a Sul Ross alumnus. I remember him during his undergraduate days as a young scholar who devoted himself to his studies with an enthusiasm, motivation, and discipline that distinguished him among his peers. I remember Dr. Urbina dropping by my office and discussing those issues that still capture his passion and interest, issues which face Latinos in the U.S. He took those same traits into his graduate studies and into his professorial career. The same traits that distinguished Dr. Urbina as a student scholar also distinguish him as a professor. The title Distinguished Professor is appropriate and deserving for Dr. Urbina.”

His humble beginnings put him in a unique position to inspire students and help them develop pride in their heritage. His life’s journey spans two countries with a variety of twists and turns. He was born in San Miguel de Allende, Guanajuato, Mexico, to a single mother as the fourth of nine children. At the tender age of seven, his two older brothers brought him to the U.S. without the consent of his mother. Several times, the trio crossed the Rio Grande near Del Rio, got caught and returned to Mexico, then crossed again.

Their luck changed when the brothers landed jobs on a ranch in Carta Valley, located northeast of Del Rio in Edwards County. The foreman and his wife, Wayne and Kitty Lewis, mentored the two older brothers and took Martin on as special project. Even though he had no documentation, Mrs. Lewis got him in school. While he was still in elementary school, his brothers were deported and Martin was sent to Ozona to live with a Mexican American family. By his ninth grade year, his brothers had documentation and were back in Carta Valley. Martin joined them there and rode the bus to school in Rocksprings that year then went back to Ozona where he finished high school and worked at a variety of jobs. He swept construction sites, owned and operated a landscaping business and hired staff, worked at a gas station, and then operated a painting business with the same guys who worked with him in landscaping.

Before he graduated from high school, Tommy Bingham talked to the young man about coming to work for Union Pacific in their oil and gas subsidiary. Bingham had noticed Martin’s work ethic and sense of responsibility. While the younger man assumed he would be mowing lawns, landscaping, and painting, the older man instead said he had heard that Martin was good at math and wanted him to work as a production engineer. He worked for Union Pacific while he finished high school and for a while after graduation.

Bingham told him he needed to attend college and earn a degree. In addition, Ben English, a State Trooper, encouraged Martin to earn a degree so he could work in administration for the Texas Department of Public Safety.

Urbina decided to give higher education a try. His student career started at Western Texas College in Snyder and from there, he transferred to Sul Ross in Alpine where he earned a Bachelor of Science in Criminal Justice. He was particularly impressed by the late Dr. Felipe Ortega. Martin had several choices after graduation. He could join DPS as a trooper or take an administrative position he did not really want. He consulted Dr. Ortega, who told him to write what he wanted to do on a piece of paper and go do it. Furthermore, he told the young man that you are the author of your own life, a concept he passes on to his own students.

Martin wanted to attend UCLA’s School of Law. Unable to see a path to follow that dream, he did eventually present at a symposium on that campus. Instead, he took Ortega’s advice to attend a major university and earned his master’s in criminal justice at the Univ. of New Mexico. He worked in Ozona in the summer and during breaks for Union Pacific and eventually went back to the gas station. Over one Christmas break, UNM offered him a teaching position that would pay his tuition as well as a small stipend.

He accepted, but was unsure about whether or not he wanted to commit to a Ph.D. Tom Winfrey, his mentor at UNM, advised him to do it to be a role model for Mexican Americans and the rest of the Latino community. He said a Ph.D. would influence people in a number ways and urged the young scholar not to be selfish and give back. Urbina felt like Winfrey spoke to him as a father would speak to a son. He was also counseled to leave the Southwest so he could learn to overcome barriers. Winfrey knew people at Western Michigan Univ. and there Martin completed his Ph.D. in Sociology and dissertation in three years.

At only 27 years old, he was educated enough for a full-time faculty position and he applied at the Univ. of Wisconsin-Milwaukee. The real questions were not about his education, but whether or not he was emotionally stable enough and had the intellect to sustain the academic rigors of UWM plus publish an average of five times per year. He accepted the challenge and quickly became a prolific writer.

But, he wanted to come back to Sul Ross where it all started, and in 2009 he returned to the Sul Ross State Univ. Middle Rio Campuses to teach criminal justice. He has continued his writing, and since joining the MRGC faculty, he has published 10 complete books, a large number of peer-reviewed articles, and collaborated on a large number of other books. He became a full professor in 2013.

Dr. Urbina wanted to return to the place it all started. He now owns a home in the shadow of the water tower on the edge of Del Rio where he and his brothers used to hide after crossing the river. He can make good on his promise to his mother that he would take care of her the rest of life. He is grateful for those who mentored, helped, and pressured him to excel and gives all of that and more back to the students in classes.