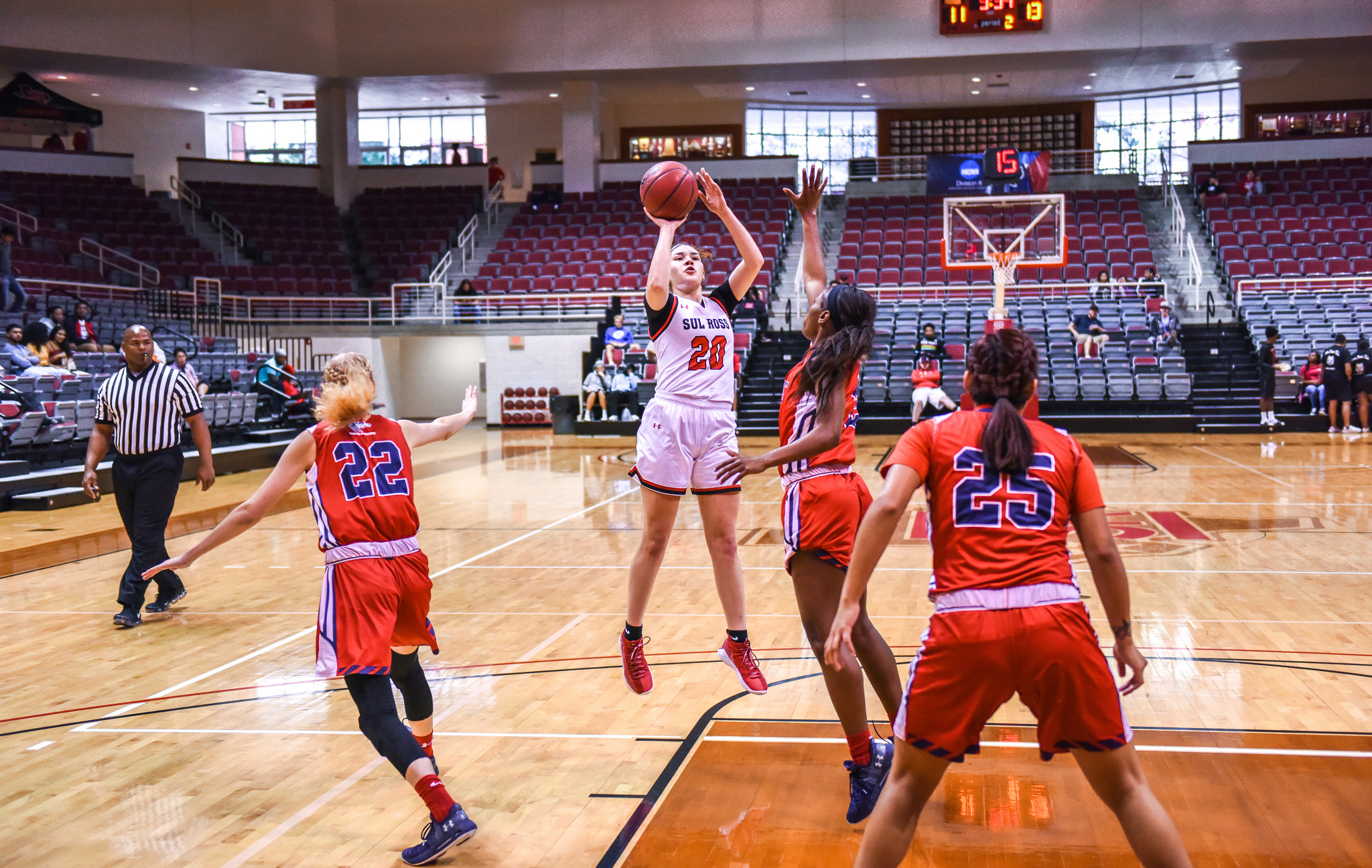 ODESSA, Texas – Trailing by 18 at the end of the third quarter, the Sul Ross Lady Lobos battled their way down to a pair of five-point deficits in the fourth but eventually came up short dropping a 70-65 ASC decision to Louisiana College Saturday at U.T. Permian Basin.

Angalyn Latin and Chandre Nunez led scorers with 21 and 18 points respectively. Nunez was just a rebound short of a double double in the effort.

Latin banked on a long range jumper to cap a 5-0 Sul Ross run early in the first quarter before another three-pointer by Annie Lenoir at the 4:52 mark put the Lady Lobos ahead, 10-2.

Sully never relinquished the lead but the Wildcats crept to within one at 1:14 off a driving layup by Alexis Lege.

A free throw by Nunez at 39 seconds extended the Lady Lobo lead to three before Louisiana College’s Chelsea Singleton scored on a midrange jumper at 25 seconds and pulled the Wildcats to within another one-point deficit, down 14-13 heading to the second quarter.

Sul Ross started the second period with a three-pointer by Nunez seven seconds into the frame for a 17-13 advantage.

Louisiana College pulled to within a pair of two-point deficits before tying the game at 27 of a layup by Jayla Landrum at the 4:02 mark.

The Wildcats broke the tie and led by one before Latin converted another three-pointer for a 30-29 Sul Ross lead at 2:05.

Three more lead exchanges followed before a three-pointer by Landrum gave the visitors a 36-32 lead with 1:21 remaining until the break.

A three-point basket by Lizette Heredia at 28 seconds pulled Suil Ross to within three before Jaleya Gold scored the final basket of the half with one second remaining for a 38-33 Louisiana College lead heading to intermission.

The Wildcats extended their lead to 12 with a 5-0 run to begin the third quarter.

Louisiana College went on to sport a pair of 15-point leads and ended the period with a tree-pointer by Rydeja McQuarn for 57-39 lead going to the fourth quarter.

Another Wildcat three-pointer by Tachiana Ledet pushed the visitor’s lead to 21 in the opening moments of the closing period.

Sully slowly chiseled its deficit down to nine off a jumper in the paint by Nunez at the 2:18 mark before a free throw by Latin narrowed the margin to five with 46 seconds left in the game.

Nunez then drained two free throws at 16 seconds but the Wildcats prevailed for the 70-65 win.

Sul Ross travels to Los Angeles, California for non-conference action against Occidental College and the University of La Verne December 18 and 19.