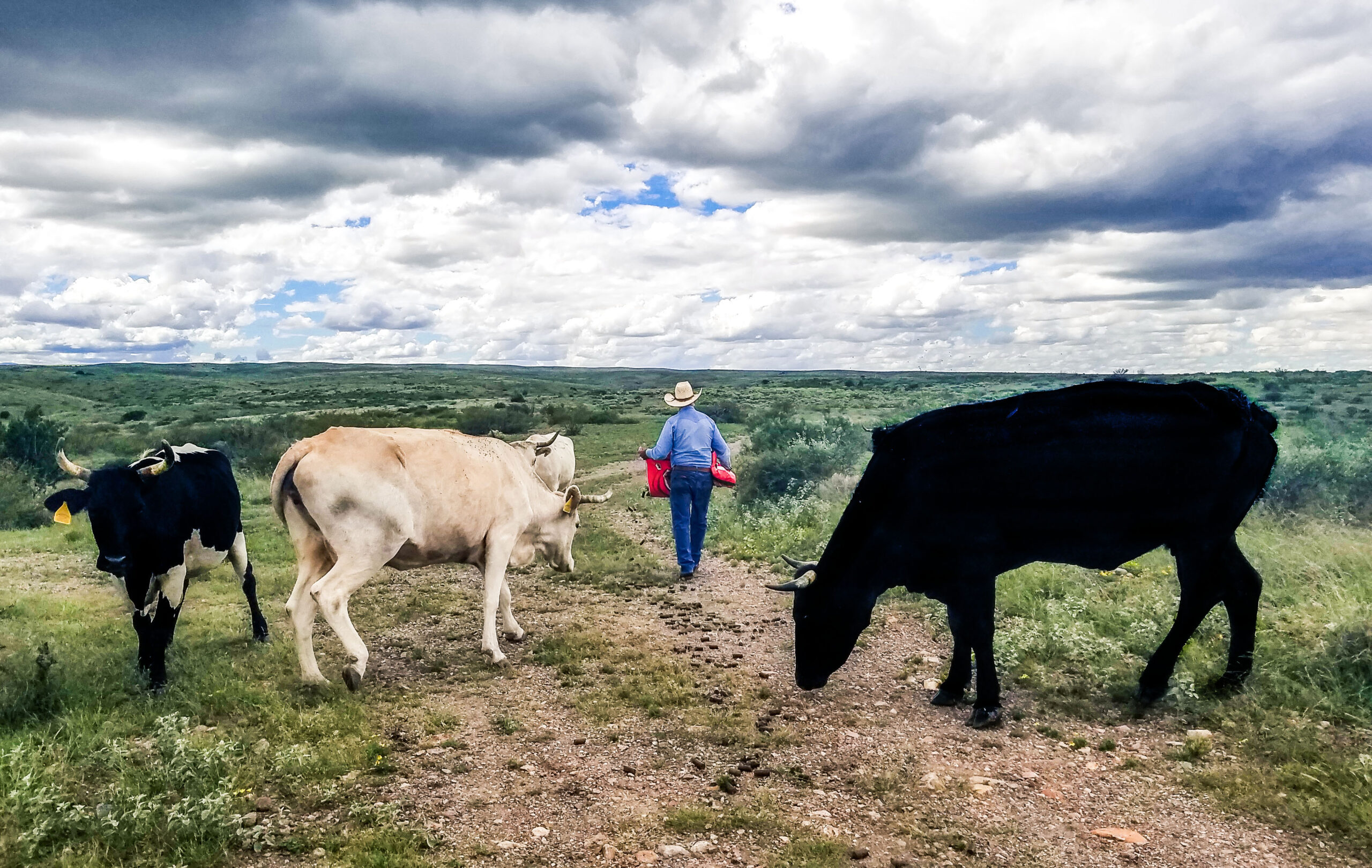 Yadon, 69, who graduated from Sul Ross in 1974 with a bachelor’s degree in range and animal science, has been a cowboy his entire adult life, travelling all over Texas to work for several ranches.  Yadon is also a farrier or horseshoer—someone who maintains and protects horses’ hooves with iron shoes.  The horseshoeing trade is physically taxing and very hard work, but worthwhile to Yadon.

Smith, 28, came to Alpine to attend Sul Ross in 2011.  Previously, he came from back East to attend Mesalands Community College (Tucumcari, NM) for their renowned farrier program.  Smith has always been involved in rodeo, and continued to rodeo after coming to Sul Ross.  In 2013 he added an SRSU Bachelor of Fine Arts degree to his horseshoeing certificate from Mesalands.

Yadon and Smith, though many years apart in age, have developed a very close friendship.  The two met in 2012 when Yadon was volunteering to help out the rodeo team at Sul Ross.

Always around the team and helping where he could, when Yadon needed some help on the ranch and with his shoeing it was natural to ask a rodeo team member.  Smith accepted the offer and went to work full-time for Yadon in 2012.  Through Yadon’s tutelage, Smith refined his shoeing skills and also learned how to cowboy.

“I worked for Dennis, and I looked after the equine barn at the college, and had my own shoein’ gig on the side,” recalled Smith.  “Dennis gave me confidence.  I was still wet behind the ears, even after my years at Mesalands.”

When asked how Alpine’s cowboys have changed over the years, Yadon replied, “I think the goals are different.  I think maybe it was just me, but I was raised on ranches and I had a general concept of cowboying and operating ranches.  Now, the cowboys don’t have as much desire to know the operating end of the industry as much as they do the business and money end.”

Both Smith and Yadon agreed that true cowboys are becoming a rare breed, along with the horseshoers.

“There’s a lot more horses to shoe in Alpine than there used to be, but there’s a lot less horseshoers,” said Smith.  “All the old-timers know how to shoe, but seems like nobody wants to do it anymore.”

Yadon noted that horseshoeing has changed significantly since “old-timers” like him first learned how to shoe.

“There’s a lot more technology these days for treating different kinds of lameness.  Corrective shoeing has really advanced, and there’s a lot more availability of new techniques.  Most of the stuff I learned was trial and error.

“While Colby got to go through a program with really good teachers, and had a little more access to some of that (recent technology), most of the guys I learned from had just taught themselves.  I got to work under some polo horse and hunter jumper shoers, which is a little different than ranch ponies, which is what I’ve mainly done.”

In addition to decades worth of technical changes in horshoeing, Yadon has also witnessed significant changes in both the local agricultural economy and cowboy culture.

“Here in Alpine, we shoe different than in other parts of Texas—because of the terrain.  When I came here in ’67, there were a few places still loadin’ cattle on the train to ship.  It was an ag community.  And it’s still an ag community now, but not as ag-oriented as it used to be.  There’s a lot more pleasure horses to shoe here, and more ranch ponies, too.  Used to, all the ranch horses were shod by their own riders since they couldn’t afford to pay us,” he said, chuckling, with eyes gleaming at the memory.

Both Smith and Yadon, though from completely different parts of the country, and generations apart, are carrying on a rare and almost lost trade.  They know the same town, the same school, and the same people, and as a result have an absolutely wonderful friendship.  They are doing their best to keep the heritage of the West, and the cowboy, alive and breathing.  Every kid’s hero is a cowboy, and as long as there is one man riding a horse to look after his cattle, the spirit of the West—exemplified in the horshoeing of Smith and Yadon—will never die.