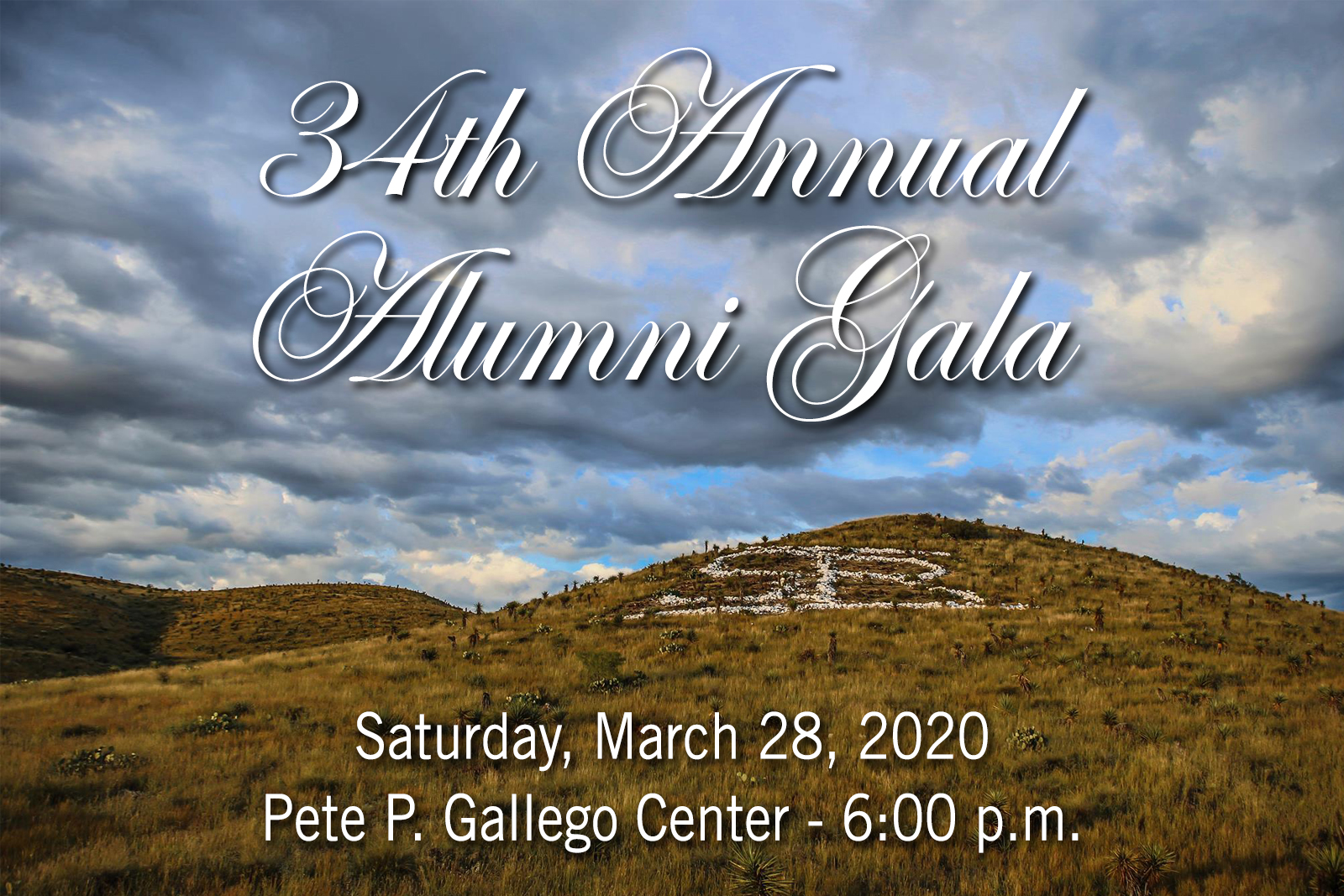 by Travis Hendryx, Director of Marketing and Communication

The reception will begin at 6:00 p.m. with the dinner and induction ceremony to follow at 7:00 p.m.

The event is free to all inductees plus one additional person.

For more information including registration and tickets, visit the 2020 Alumni Gala website, https://www.sulross.edu/hallofhonor.

Dr. Joe Priest has dedicated his life to the fields of education, sports science, exercise and fitness.

He began his career in the classroom as a biology and health teacher and P.E. coach for North East and Northside Independent School Districts (San Antonio) from 1970 to 1975.

Priest then moved to Uvalde where he continued to teach biology while coaching football and track from 1975 to 1980 before pursuing and completing his Doctorate of Education from Texas A&M- Commerce in 1983.

He conducted post-doctoral work at the Texas College of Osteo Medicine, Texas Tech University, and the University of Texas at San Antonio.

From 1985 to 1987, he served as a contract fitness trainer for the U.S. Secret Service, the U.S. Drug Enforcement Administration, the U.S. Marshals Service and several state police agencies.

Dr. Priest served six years (1983-1989) as the Director of Education for the National Institute for Fitness and Sports before transitioning to the role of principal at H.P. Webb Elementary School in Olton, Texas from 1989 to 1991.

He was then hired as associate professor in the Department of Kinesiology at Tarleton State University in 1991 and was promoted to professor in 1997, a position he still holds today.

Dr. Priest received a three-year presidential appointment (1997-2000) to the Research and Evaluation Committee for the Texas Association of Health, Physical Education, Recreation and Dance.

In addition to his Texas State Teacher certification, Dr. Priest is also certified in Professional Health and Physical Education and Provisional Biology. He also holds certification as a Texas Mid-management Administrator.

Dr. Priest was the 2003 recipient of the Jack and Louise Arthur Distinguished Faculty Award at Tarleton State and was a 2006 Provost’s Instructional Technology Innovation Award nominee.

Priest and his wife, Susan, are the parents of three children, Jason, Wes and Lindsey.
————–
Larry Hill- 2020 Distinguished Alumnus

A 1992 Sul Ross State University Athletics Hall of Honor inductee, Larry Hill excelled not only as a student-athlete but also as a championship high school football coach and educator.

Following graduation at East Central High School in San Antonio, Hill enrolled at Sul Ross in 1979 and lettered four seasons with the Lobos.

During his playing career, he set 15 TIAA records and 14 Sul Ross career records.

Hill was also a standout in the classroom and was named Who’s Who in American Colleges and Universities.

He went on to receive his Bachelor’s and Master’s degrees from Sul Ross before entering the coaching field.

In 1993, Hill became the head football coach at Smithson Valley High School and led the Rangers to their first playoff appearance in school history in 1994.

Under Hill’s leadership during the past 21 years, Smithson Valley compiled a 225-48 win-loss record including a 181-28 regular season mark. Entering the 2019 season, Hill holds a 257-80 overall career record.

Hill is a 35-year member of the THSCA and was inducted into the organization’s Hall of Fame in 2016. He was honored by THSCA with the Tom Landry Award in 2015.

On four occasions, Hill was a finalist for the prestigious Power of Influence Award, a national award given annually to a top high school football coach for on-the-field success and community service.

Casarez received the second of two Master’s Degrees (Counseling) from Sul Ross in 2008. She earned a Master’s of Education in Curriculum and Instruction from Texas State University in 2003 after receiving her Bachelor’s Degree in Journalism from the University of Texas at Austin in 2001.

In 2013, Casarez earned her Doctorate in Educational Psychology from Texas Tech University.

Casarez is an Associate Professor in the Department of Curriculum and Instruction at Angelo State University, where she oversees the master’s degree program in Professional School Counseling and in Guidance and Counseling.

These programs are consistently ranked nationally and candidates consistently maintain high pass rates on the state certification exams, speaking to the rigor and quality of the programs.

In 2018, she received the Distinguished Faculty award from the Angelo State University Alumni Association. Her accomplishments include numerous scholarly presentations and several publications.

She currently serves on the editorial board of the Journal of Professional Counseling and has served on several doctoral dissertation committees.

As an ongoing campus leader for the local chapter of Phi Kappa Phi, she coordinated implementation of a student scholarship and consistently promotes ways to engage faculty and students in order to sustain and grow the chapter.

Prior to ASU, Casarez worked as a public school counselor and teacher.

She enjoys serving the community through various organizations, involvement in the school districts, and her church.
————–
Joel Bellinger- 2020 Athletics Hall of Honor (Football)

Joel Bellinger’s passion for football began in middle school and continued through the college ranks at Sul Ross and into officiating contests for some of the biggest Division I programs in the nation.

Bellinger played right tackle for the Lobos from 1979 to 1982. He was named an NAIA All-American, All-TIAA and NAIA District 8 player his senior season.

Bellinger and the 1982 Lobos finished the campaign ranked No. 4 in the nation.

In three seasons, he never allowed a sack and started in 28 of 31 games.

Bellinger graduated from Sul Ross in 1988 with a degree in physical education and commenced on a 30-year career as a football official.

He began as a middle school referee and eventually worked his way to the NCAA Division I level as an umpire officiating games for the Mountain West and Big 12 conferences.

Bellinger is also an elementary physical education teacher, a position he has held for the past 22 years with the San Antonio Northeast Independent School District..

A member of the 1970 and 1971 National Champion Lady Lobo volleyball teams, Kay Whitley went on to serve as a coach and athletics director at her alma mater in a career spanning more than four decades.

Whitley graduated from Sul Ross in 1972 and went on to earn her Master’s Degree before joining the coaching staff.

She is the second longest serving director of athletics at Sul Ross and is also the only female to serve in that capacity.

Dan B. Dunagan has made his mark in the hearts and lives of Sul Ross State University student-athletes for the past 30 years.

Dunagan received his Bachelor of Arts Degree in Business from Sul Ross in 1974 and managed Big Bend Coca-Cola Bottling for the next several years.

In the late 1980’s he felt called to student ministry and in 1993 became director of the Sul Ross Baptist Student Ministry, a position he held until 2017.

Dunagan has served as huddle leader for the Sul Ross chapter of the Fellowship of Christian Athletes (FCA) for the past five years.

He served as offensive line coach for the Lobos in 2012 and helped guide Sul Ross to the No. 1 offense in the nation in all three NCAA divisions that season.

In addition to serving as huddle leader at FCA, Dunagan has driven buses for Sul Ross athletic teams covering thousands of miles. He is also chaplain of the football team and has led FCA groups to mission trips to Alaska where student-athletes have participated in coaching youth basketball camps.
————–
A.C. Lex- 2020 Athletics Hall of Honor (Football)

He was instrumental in beginning a 21-game winning streak at Sul Ross that ended in the 1964 season.

Lex led the ground game in the LSC in 1964 and received All-LSC and NAIA All-American Honorable Mention recognition.

After college, Lex played for and was the leading rusher the San Antonio Toros of the Continental Football League which was the first NFL farm league and was a precursor to the AFL.

Following his playing time in San Antonio, Lex signed a no-cut contract with the Philadelphia Eagles and later tried out for the Miami Dolphins and the Denver Broncos. While at Denver, he ran for three touchdowns against the Kansas City Chiefs.

Following his playing career, Lex taught and coached for 10 years and was inducted into the Boerne High School Hall of Fame in 2011.
————–
1965 Lone Star Conference Champion Football Team- 2020 Athletics Hall of Honor

The 1965 football season was one for the books at Sul Ross State University.

Coach David Slaughter’s Lobos finished the regular season campaign with a perfect 10-0 mark before falling in the first round of the NAIA postseason to Linfield (Oregon) by a score of 30-27.

The loss to the Wildcats snapped a 16-game Sul Ross winning streak.