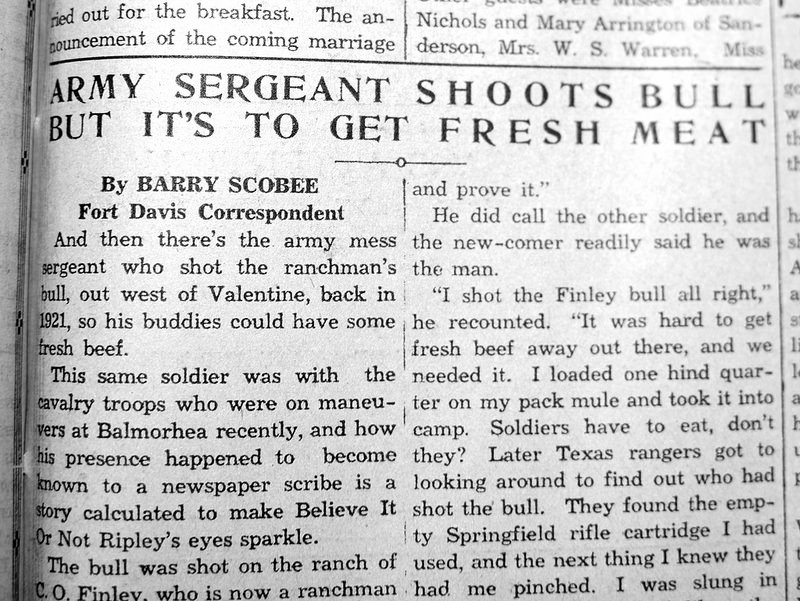 And then there’s the Army mess sergeant who shot the ranchman’s bull, out west of Valentine, back in 1921, so his buddies could have some fresh beef.

This same soldier was with the cavalry troops who were on maneuvers at Balmorhea recently, and how his presence happened to become known to a newspaper scribe is a story calculated to make Believe It Or Not Ripley’s eyes sparkle.

The bull was shot on the ranch of C. O. Finley, who is now a ranchman in the Pecos country.  Mr. Finely is an old-time resident around the Davis Mountains.  He owned, back in 1921, what is called the Holland Ranch, 12 miles west of Valentine around the Rimrock.  Espy Miller of Fort Davis owns the ranch now, along with the Army post the War Department built there in 1919-21.  It was while this post was under construction that B Troop of the Fifth Cavalry was stationed there.

In company with Elmer Devenport, superintendent of the CCC sub-camp in the Davis Mountains, Mr. Miller went to Balmorhea maneuver grounds.  Mr. Devenport ran across a sergeant whom he knew.  The sergeant asked them to have dinner with his troop.  While they were manipulating a mess kit of slumguillion and beans, Mr. Miller chanced to mention about the mess sergeant of 17 years ago who shot the bull.

“Say,” said the sergeant host, pointing to a tent nearby, “see that man sitting there in his shirt sleeves?  He’s the man who shot the bull.”

Perhaps Mr. Miller in his surprise looked skeptical, for the host said, “Sure, and I’ll call him over and prove it.”

He did call the other soldier, and the new-comer readily said he was the man.

“I shot the Finley bull all right,” he recounted.  “It was hard to get fresh beef away out there, and we needed it.  I loaded one hind quarter on my pack mule and took it into camp.  Soldiers have to eat, don’t they?  Later Texas Rangers got to looking around to find out who had shot the bull.  they found the empty Springfield rifle cartridge I had used, and the next thing I knew they had me pinched.  I was slung in jail at Marfa.  It looked like the first step to the pen, and I didn’t feel any too good.  But Mr. Finely who owned the bull had a heart.  All he wanted was pay for the bull.  My troop buddies dug up the needed $75 and paid for the animal.  The owner was satisfied and I was released.  There’s just one other man who was in B Troop at that time who is here on these maneuvers.  He donated $5 towards buying me out of the can, and I do appreciate him yet!”

Somebody asked the bull killer  if the bull steak was tough–“Could the soldiers chew it?”  “Say,” said the bull butcherer, “those horsemaids was hungry enough to eat the jamb off the door–that bull beef was veal to us right then.”

“And to think,” said Espy Miller, “that out of several thousand soldiers around me, the man I was talking about, who had shot the bull on the ranch I now own, was right there on the spot, and the story I had heard from various sources, I heard right there from his own lips.  Naturally you’d never expect in a lifetime to run across a soldier again who had been at a certain spot seventeen years ago.”