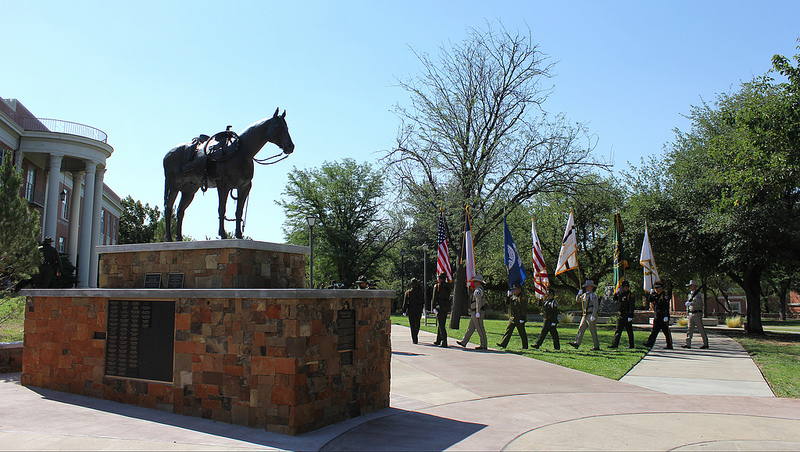 The Big Bend Area Law Enforcement Officers Association (BBALEOA) added five names to their memorial plaque on Wednesday, May 30, honoring the end of watch (EOW) for fallen comrades.  The organization held their 11th annual ceremony on the mall at Sul Ross State University in Alpine.

Two Big Bend area officers died in the line of duty in 2017.

Border Patrol Agent Isaac Morales died May 24, 2017 of knife wounds following a parking lot confrontation in East El Paso.  Morales, 30, began Border Patrol duty in 2008 and was assigned to the Ysleta Station of the El Paso Border Patrol Sector at the time of his death.  He is survived by his parents, Ricardo Morales, Sr. and Dolores; his brother, Ricardo Morales, Jr.; his sisters, Ana Morales Garcia and Martha; and his girlfriend, Yasmin Gonzalez.

Border Patrol Agent Rogelio Martinez died November 19, 2017 from multiple injuries sustained while responding to reports of unknown activity in a culvert near Van Horn.  Martinez, 36, is survived by his parents, Jose and Elvia; his brothers, Enrique and Miguel; his son, Sergio; his fiancée, Angie Ochoa; three step-children, Abby, Arianna and Alex; and numerous nieces and nephews.

Cass died from a fatal heart attack following an extensive foot pursuit of two shoplifting suspects.  De Leon was shot to death by bandits in an act of revenge, and Elsberry was shot to death while attempting to arrest robbery suspects in Valentine.

In total, 159 names of fallen law enforcement officers, dating back to 1877, have now been included on the Memorial plaque.

Following the National Anthem sung by Molly Ferguson, daughter of Presidio Mayor John Ferguson, Sul Ross Associate Vice-President for University Services & Dean of Student Life, Leo Dominguez, addressed the service, saying, ”At this yearly commemoration, we express our gratitude to a highly dedicated community of individuals who serve as our first line of defense and protection. At the same time, we extend our heartfelt condolences to the families and friends of law enforcement officers who have made the supreme sacrifice in the line of duty.

“Law enforcement officers realize that each day on the job places them in harm’s way. Yet, you willingly perform your duties from a desire to make a difference in the lives of all of us—to protect and to serve.  Sul Ross is proud to host this annual memorial as a small token of our deep appreciation for your service,” he said.

He noted that an understanding of the importance of law officer memorials did not come to him early in his career.  Rather, it arrived when he began meeting families of the fallen during National Police Week in Washington D.C.  He shared memories of time spent with the family of Detention Enforcement Officer Tommy Chin who died in 2000 from a flesh-eating bacterial infection contracted while detaining 151 Chinese illegal immigrants on an island off the coast of Washington State.

“Mrs. Chin told us this story.  It seems their daughter had a habit of sleeping with them because she was scared.  They were trying to work with her to get her to sleep in her own bed.  One day her dad, Tommy, bought a set of walkie talkies and showed her how to use them.  He told her, ‘Whenever you need me at night, or get sacred, just call me on the radio and I’ll be there.’”

Mrs. Chin explained that after Tommy died she was having a hard time getting their daughter to understand that he was gone.

“She kept going around the house calling her dad on the radio and could not understand why he was not answering,” continued Huffman.  “For me, that was the moment I understood the magnitude of the sacrifices made by these heroes that we honor here today.”

Huffman concluded with a proverb.  “Good men must die, but death cannot kill their names.  We honor these good men and women and all those who went before them, serving with honor and distinction.  It has been an honor to know them and to serve with them.  We will forever remember their names and their memories.”

The service concluded with the benediction.

The BBALEOA, established in 1970, accepts donations for two funds.  One is for maintaining and updating the memorial at Sul Ross State University, the other is a scholarship fund for area students who are working toward a law enforcement career.  Donations are tax deductible and may be mailed to the BBALEOA, P.O. Box 1134, Monahans, Texas 79756.