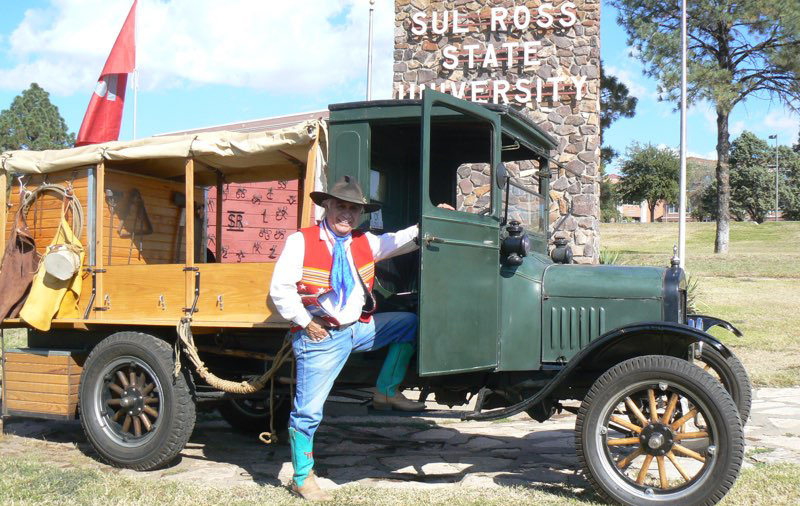 Three-time graduate Eddie Sandoval, who has combined a lengthy career in education with his work as a Native American preservationist, will deliver the commencement address at Sul Ross State University-Alpine’s spring graduation exercises Friday, May 17.

A total of 255 students are candidates for degrees, 172 at Sul Ross-Alpine and 83at RGC.

At Sul Ross-Alpine, the Sul Ross Commencement Band, directed by Dr. Jeffrey Meyer, assistant professor of Music, will play the processional, “Pomp and Circumstance,” and the recessional, “Victors March.” Dr. Joseph Velasco, associate professor of Communication, will be the macebearer and will read the names of the graduates. Dr. Kevin Urbanczyk, professor of Geology and Dr. James Zech, professor of Biology, will serve as marshals.

Sandoval, Arlington, who holds both a bachelor’s and master’s degree in industrial technology as well as a master’s degree in educational counseling from Sul Ross, spent over 40 years in secondary and higher education. After teaching and coaching for five years in San Antonio, he worked nearly 40 years at Tarrant County College, Fort Worth, retiring in 2011 as head of counseling.

For his decades of work advocating for the people of Tribal Nations and representing and preserving Native American heritage, Sandoval was inducted into the Texas Trail of Fame on May 14, 2018.  The Trail of Fame honor comes with a bronze marker inlaid at the historic Fort Worth Stockyards.

“Eddie is a unique individual who Sul Ross should be proud to recognize,” said Sul Ross alumnus Sharon Henderson.  “When I think of Eddie, I hear him saying, ‘How can I help?’”