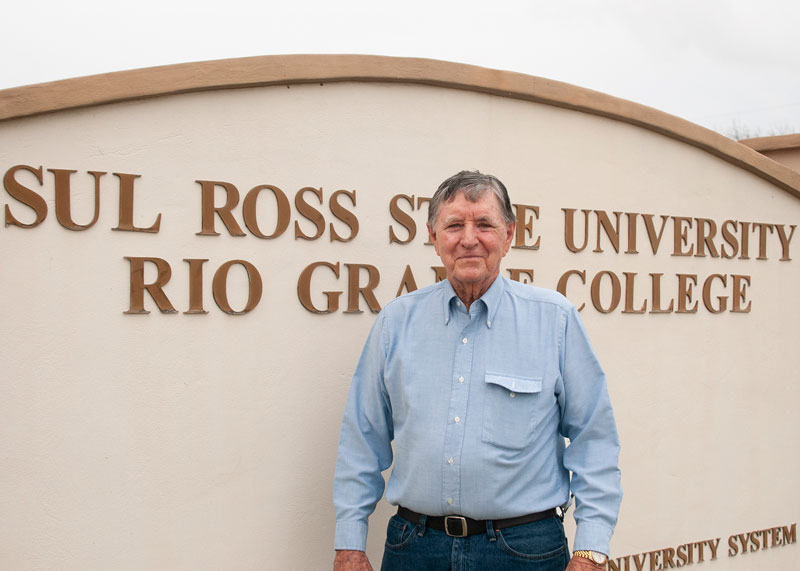 by Laura Nelson, Director of Enrollment Marketing and Public Relations

Born and raised in Coahoma in west Texas, Bill actively participated in athletics and went to Sul Ross to study and play football. He earned a Bachelor of Science in Mathematics in Alpine and decided to pursue his dream to coach football. He soon learned coaching is a way of life that he and his wife Judy didn’t want to commit to. He went to work in the oil field and ended up in Cody, Wyo. where their daughter was born in December on a day that was -23 degrees F. Ten days later, he moved his family back to Texas.

He taught math in Midland for a time and then applied for and received a National Science Foundation grant to get a master’s degree. He attended the University of Oklahoma in Norman and completed a Master of Natural Science in Mathematics.

Bill returned to his alma mater in Alpine as an instructor in the math department and also served as the Assistant Registrar. He took advantage of a state grant which allowed him to remain employed while attending East Texas State Univ. (now Texas A&M-Commerce) to earn a doctorate in education. Back in Alpine, Bill worked as Registrar and continued to teach education and math classes part time. He traveled the state enrolling students, including those in the Southwest Texas Junior College service area, and in 1975, he transferred from Alpine to assume the duties of the Director of the Uvalde Study Center.

In the early days, classes were held in Del Rio, Eagle Pass, Uvalde, and Kerrville. With two faculty members in business and education, a small budget, and a will to serve students, Dr. Tindol worked tirelessly to provide access to upper-level university programs to the area. Under his direction, enrollment increased to over 600 students. The Study Center was granted a separate funding stream and as enrollment across the sites grew, Sul Ross State University’s Rio Grande College was born.

Dr. Tindol went back to the classroom full-time, teaching education and math at RGC and retired in 2011. He said that all over south Texas he continues to run into RGC graduates that he taught, and said that at one time, 75 percent of the principals and superintendents in the area were Sul Ross graduates. He has taught his students’ children and even their grandchildren.

His wife, Dr. Judy Tindol, is also a career educator and the pair have two children. Daughter Kelley Kimble serves as a Family Court Judge in the middle Rio Grande region and son David owns a winery in Dripping Springs.

Bill said, “I still love Sul Ross. Sul Ross is still a priority for me and will remain a priority.” Congratulations to this alum, employee, and champion of Sul Ross State Univ. for being honored as a Distinguished Professor of Emeritus.