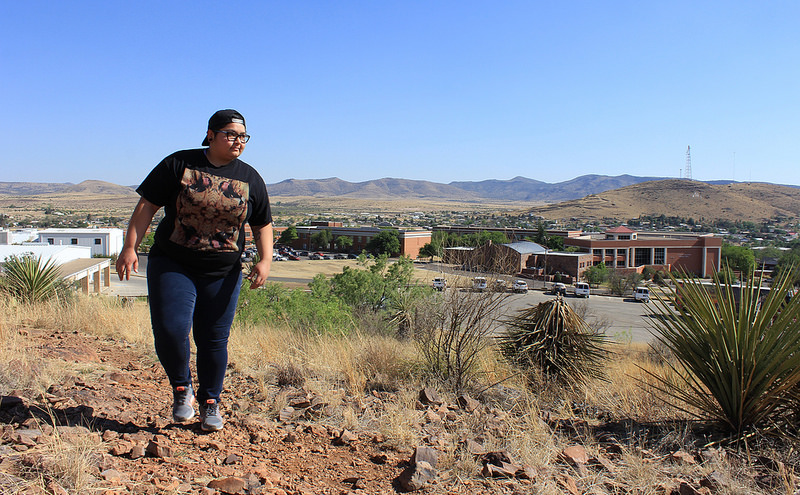 Springtime in the Big Bend can be a source of bountiful change.  April’s 100-degree days have been followed by a May 1 freeze.  Raging dust hurricanes end with a Zen-like desert stillness.  Freshly scrubbed houses see kitchens invaded by ants.  These seasonal shifts appear just as another phenomenal change arrives for Sul Ross students in the form of a May 11 commencement.

But don’t expect a little crazy weather or insect invasion to faze two of Sully’s soon-to-be alums; for these Lobos, the occasional craziness of springtime West Texas merely mirrors their journeys from first-day freshmen to graduating seniors.

Cassie Sandoval, an Odessa native finishing her bachelor’s degree in psychology, explains that as a freshman she couldn’t comprehend the idea of graduating.  “I felt like it wouldn’t even happen,” she said.  “It seemed so far away because I had just graduated from high school and that seemed to take forever.”

Valerie Herrera, El Paso, graduating with a bachelor’s degree in animal science, likewise felt skeptical of seeing herself cross a commencement stage.  “I honestly thought the day would never come because it would require four more years of school, and I didn’t think I would last that long.”

To help de-stress during four years of arduous academic life, both students took advantage of Sul Ross’ natural surroundings.  Herrera noted the peacefulness available right behind the dorms on the trails of Hancock Hill.  For Sandoval, trips to Big Bend National Park balanced out the many hours of studying, and as a result her mental picture of the Sul Ross area is now one of “mountains, hills, and nature. The Big Bend means the sun setting with beautiful colors and relaxing outside when it’s not windy. It means embracing the nature of West Texas.”

Both students also found perseverance with help from particular professors and courses.  Sandoval’s psychology major provided many opportunities to study the moxie of the human mind.  In particular, the course “Trauma and Resiliency,” taught by Dr. Bibiana Gutierrez showed her how human beings can endure so much “and still have the power to overcome difficulties and grow as individuals.”Herrera mentioned the guidance of her major advisor Dr. Jamie Boyd, who helped her stay focused on the sometimes tricky path towards degree completion.

Despite almost being finished with their undergraduate trials, Sandoval and Herrera still view that May 11 commencement stage as being like a desert mirage—a strange mixture of certainty and uncertainty.

“It’s quickly approaching, and it’s something I can’t wrap my head around. I have feelings that I’m ready to leave and approach the ‘real world’ but then I feel unprepared. It just depends on the given day how I feel about graduation,” said Sandoval.

As Herrera notes, “My family knows this is my last semester, and even my friends know, so it’s nerve-racking to think about not graduating on time.  I’m also scared of what will come afterwards because I’m not 100 percent sure of what I’m doing after college.”

Uncertainty aside, Sandoval and Herrera have both begun preparing for their post-Sul Ross lives.  Sandoval plans to complete a master’s degree in San Antonio and begin working towards her goal of being a school counselor.  Herrera, in keeping with her animal science degree, hopes to soon be working for an animal shelter and to one day have an ownership role in such a rescue facility.

Both students agree that wherever graduation and their careers take them, they won’t be leaving Lobo Land forever.  Hot, cold, calm, or windy the trails of Hancock Hill and Big Bend National Park have meant more than just a beautiful and unpredictable place to hike.  “This area means so much to me because I’ve met the best friends I could have ever asked for,” said Sandoval.  “Sul Ross has and will always be a home away from home.”