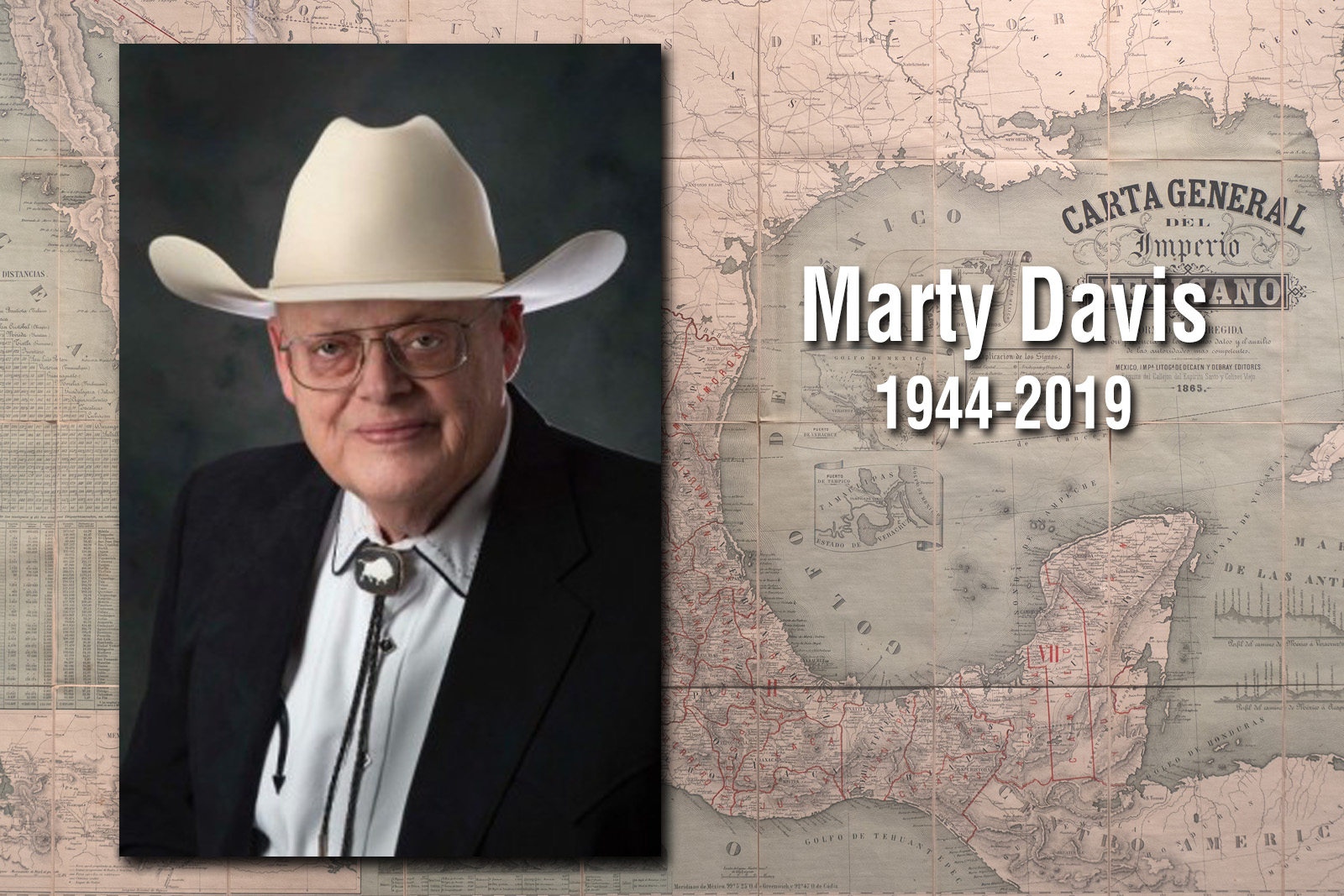 John Martin “Marty” Davis, Jr., a longtime friend and supporter of Sul Ross State University and the Museum of the Big Bend, died Saturday, December 7 following a lengthy illness. He was 74 years old.

Davis and his wife Yana were instrumental in the creation of the Yana and Marty Davis Map Collection at the Museum of the Big Bend. It is one of the largest and most diversified collections of maps in the state.

Davis was a long time resident of Dallas but spent a significant amount of time at his home in Fort Davis, Texas. He attended Southern Methodist University where he earned a Bachelor of Business Administration, 1967, and a Juris Doctorate, 1970, Order of the Coif Honors. He earned the rank of Lieutenant and served in the United States Navy as a Judge Advocate from 1968 through 1974. He joined Davis, Clark and Company, CPAs in Dallas from 1976 to 2008.

“Marty was an advocate for the Museum of the Big Bend and Sul Ross State University,” said President Bill Kibler. “He was well known as a philanthropist particularly for the museum but his love of Sul Ross extended to all areas of academics and cultural activities. He was a man who loved this region and the people. Marty will be sorely missed by so many of his friends at the university.”

“Our thoughts and prayers are with Yana and Marty’s entire family at this time,” he said.

A recipient of the “Slingin’” Sammy Baugh Award, Davis was awarded an honorary Doctorate of History honoris causa from Sul Ross during Spring, 2016 Commencement. For his philanthropic works, Davis was recognized with the Dallas Heritage Award and the Obelisk Award for Support of the Arts in Dallas.

Davis was an accomplished researcher and author who wrote numerous articles focused on history in the United States from the late 1800s to the early 1950s. His publications include Civil War Taxes: A Documentary History, Texas Land Grants, 1750-1900: A Documentary History, Parole, Pardon, Pass and Amnesty Documents of the Civil War, Confederate Treasury Certificates: A Collectors Guide to IDR’s, and Going to Texas: Five Centuries of Texas Maps.

Davis had a friendship with Sul Ross and the Museum of the Big Bend that lasted more than a decade. In addition to the donation of his and Yana’s extensive map collection, Davis championed fundraising efforts to renovate the historic Museum of the Big Bend Texas Centennial building and co-chaired the capital campaign for the new Museum Complex

“I first met Marty in 2004 in the Museum’s gift shop,” said Museum Director Mary Bones. “Since then, he has always been an advocate for the Museum and Sul Ross. Marty was always thinking of ways he could help.”

“Marty was one of the biggest supporters the University and the Museum have had,” said Judy Alton, Chair of the Museum of the Big Bend Director’s Advisory Council.

“He was totally dedicated to the mission of the museum and strove to help tell the story of the land and the people of the Big Bend area.”