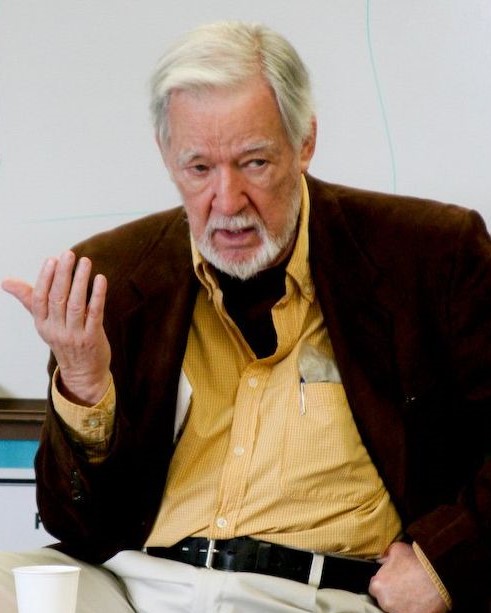 WWII veteran, reporter and lecturer Charles Wiley returns to the Sul Ross State University Middle Rio Grande campuses next week just ahead of the Veterans Day holiday. Everyone is welcome to attend the free events.

News Media Bias: Key to the Future
A veteran journalist’s report, plus his advice on keeping well-informed in today’s media climate. This event will be a small group discussion open to the public.

Lessons Learned While Living 93 Years in the Fast Lane
Observations of a World War II veteran, international journalist, Broadway actor, and activist. Members of the public are welcome to attend this inspirational seminar.

World War II: When All Americans Went to WarA WW2 veteran reports on the intensity of home front involvement

Insights and memories from a person who experienced the war as both an adolescent in the U.S. and as a young sailor in the Pacific Ocean. Students, veterans, and American history buffs will enjoy this rare chance to learn about WWII from someone who was there.

Charles Wiley, a veteran international reporter, has lectured in 50 states and on six continents. Every year, he speaks at dozens of colleges, high schools and other youth audiences throughout the country. Included are annual talks, since 1991, at UC Berkeley (up to 800 students) and to almost 2000 of the country’s top high school seniors at Boy’s State in New Jersey and Wisconsin.

While reporting from 100 countries, his search for facts led to his arrest eight times by secret police, including the KGB, and imprisonment in a Cuban dungeon while he was a correspondent for New York City radio station WOR. Wiley has covered 11 wars, four times in Vietnam, including reporting for NBC, UPI, the London Express and numerous other U.S. and foreign news media.

A graduate of New York University, his freelance articles and photographs have appeared in numerous publications, including the New York Times, U.S. News & World Report, Newsweek and Time. A well-known radio/TV talk-show personality, he has appeared on hundreds of network and local programs, including many times on CNN Crossfire and C-Span.

He helped establish guidelines for a free press in Mongolia, was a speaker for the White House Public Outreach Group, lectured in New Zealand at the Civil Defence Academy and played a major role at international conferences in Great Britain and Italy.

Wiley frequently addresses military audiences in the USA and abroad including the Naval War College, the Defense Intelligence Agency school, the Air Force school for its top NCO’s, the Navy Postgraduate School, CincPac, the UK intelligence school and many others. He was the keynote speaker at a Jane’s two-day conference in Washington on homeland defense and terrorism.

He went into Afghanistan, with the mujahideen, during the war against the Soviet Union. Later, during a tour of Kosovo, his visits to troops from many nations included the Russian 13th Tactical Group.

Wiley served in the Pacific during World War II. He has taught a life-style seminar at five colleges and had a very successful 13-year show business career.