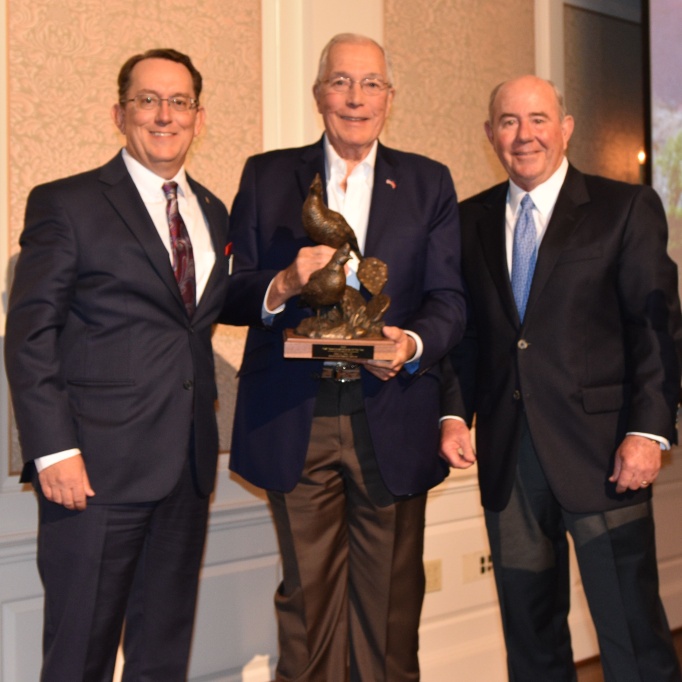 Nau has impacted all corners of the country through his conservation vision. Among his myriad accomplishments, he currently serves on the boards of the National Park Foundation, the Congressional Sportsmen’s Foundation, the American Battlefield Trust and the Abraham Lincoln Presidential Library Foundation. Here in Texas, he is a longtime member of the Texas Historical Commission, and is currently serving as board chairman.

In West Texas, Nau has partnered with the Borderlands Research Institute (BRI) at Sul Ross State University in Alpine on numerous wildlife and habitat research projects. In 2007, John acquired Nine Point Mesa Ranch in southern Brewster County, a breathtaking high desert oasis teeming with wildlife and the location of a continuing restoration success story, thanks in large part to Nau’s passion for West Texas and the wildlife that thrives there.

“John L. Nau, III, has certainly made his mark on conservation in West Texas and is a shining example of private land stewardship,” said Dan Allen Hughes, Jr., former chairman of the Texas Parks and Wildlife Commission, who now chairs BRI’s Advisory Board. “John has created a conservation legacy through his unwavering support of research, management, and philanthropy.

Nau is a firm believer in science-based land management, and has opened his gates to the staff and students of the Borderlands Research Institute.

“We’ve been fortunate to partner with John on a variety of research projects at Nine Point Mesa Ranch,” said Dr. Louis Harveson, who is the Dan Allen Hughes, Jr., BRI Endowed Director and professor of Wildlife Management at Sul Ross State University. “The ranch is an extension of Sul Ross State University and has become a training ground for our students, who will become the next generation of conservation professionals.”