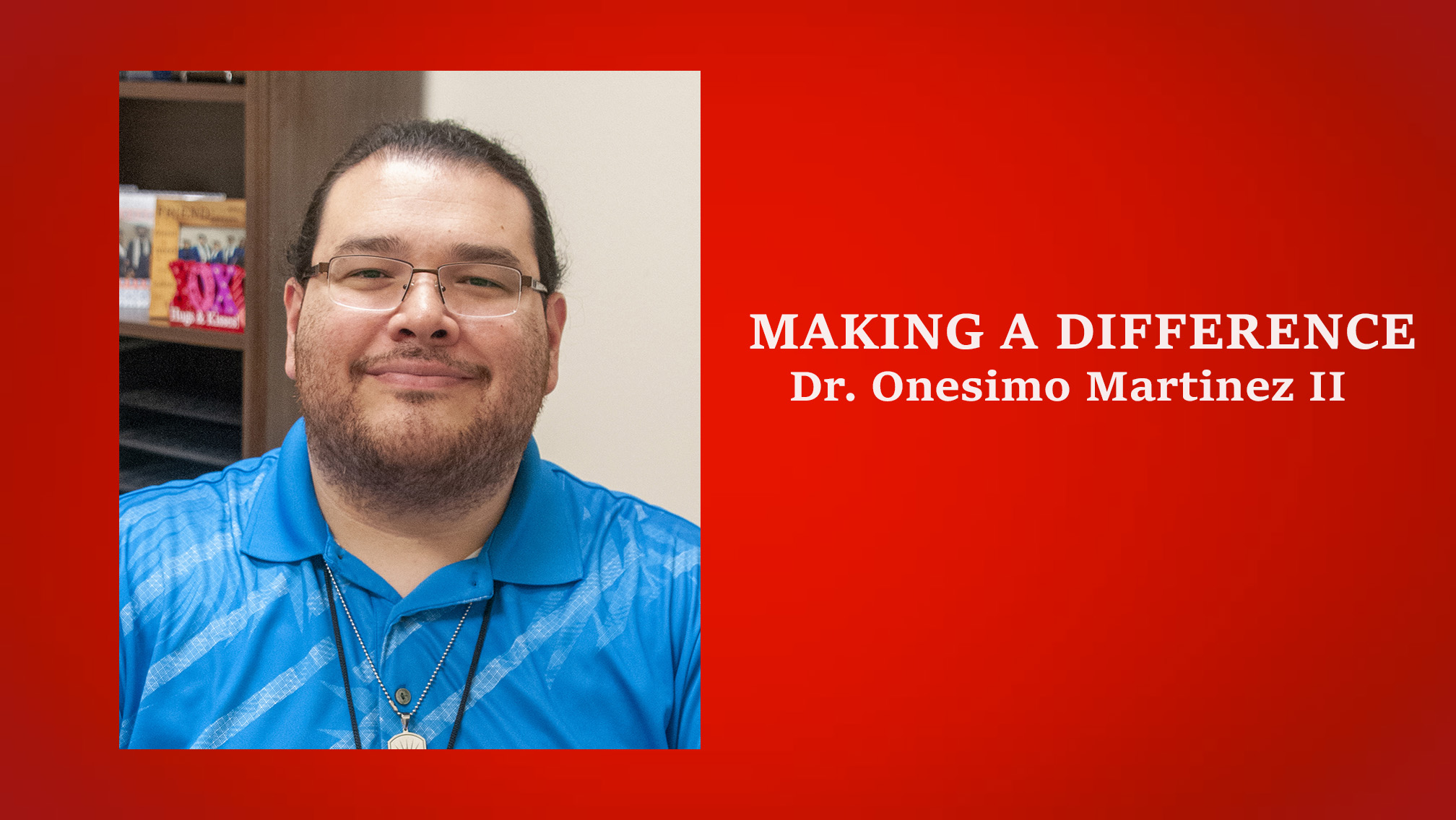 by Laura Nelson, Director of Enrollment Marketing and Public Relations

During his career in higher education, Asherton native Onesimo Martinez II considered becoming a psychiatrist when his maternal grandmother, Maria Mendez Rodriguez pushed him to become a doctor.

The dutiful grandson finished his associate degree at Southwest Texas Junior College in Uvalde, and then considered preparing for medical school. He quickly determined that he did not like studying the science he would need. Still, he aspired to study mental health, so he completed a Bachelor of Arts in Psychology with a minor in Criminal Justice at Sul Ross State University. His sister, Maria Gabriela Martinez, also earned her psychology degree and the pair graduated at the same time.

Onesimo completed his Master of Science in Psychology at Texas A&M International in Laredo, earning a graduate assistantship under the Lamar Bruni Vergara Educational Fund. Following graduation, he accepted a grant-funded position at the Wintergarden Women’s Shelter in Carrizo Springs. He served as the Primary Prevention Specialist for students in Pre-K through 4th grade and later as the Volunteer/Community Awareness Coordinator.

His parents, Maria Helena M. Martinez and Onesimo Salinas Martinez came from migrant backgrounds and both became teachers, each earning master’s degrees in education. Even though his parents set a splendid example, Onesimo never saw himself as an educator. Even so, he started his teaching career at Southwest Texas Junior College in the fall of 2012 as an adjunct, teaching two courses.

By 2018, he was a full-time instructor and decided to pursue a Ph.D. in order to be more marketable. His grandmother Maria passed away after his acceptance to the educational leadership program at the University of Texas at San Antonio, which provided extra incentive for him. He dedicated his doctoral studies in the memory of Maria and his great grandmother, Casimira Torres Mendez. Dr. Martinez took advantage of the UTSA Wintergarden doctoral program, completing all classroom hours face-to-face with traveling UTSA faculty at SWTJC in Uvalde.

He also volunteers his time for campus activities. He is proud of the success of the Humanities Club, with several members qualifying to present academic research papers at Montana State Univ. this spring. In addition, he has always been interested in the entertainment field and happily helps the Drama Club with their productions.

This enthusiastic, energetic faculty member plans to remain in higher education and said he would prefer to stay in the area. Dr. Martinez enjoyed his time at Sul Ross. He considers Dr. Wynne a mentor, and said “Dr. Wynne brought life to the subjects he taught by sharing his personal journey. He is one-of-a-kind and I look up to him tremendously.”