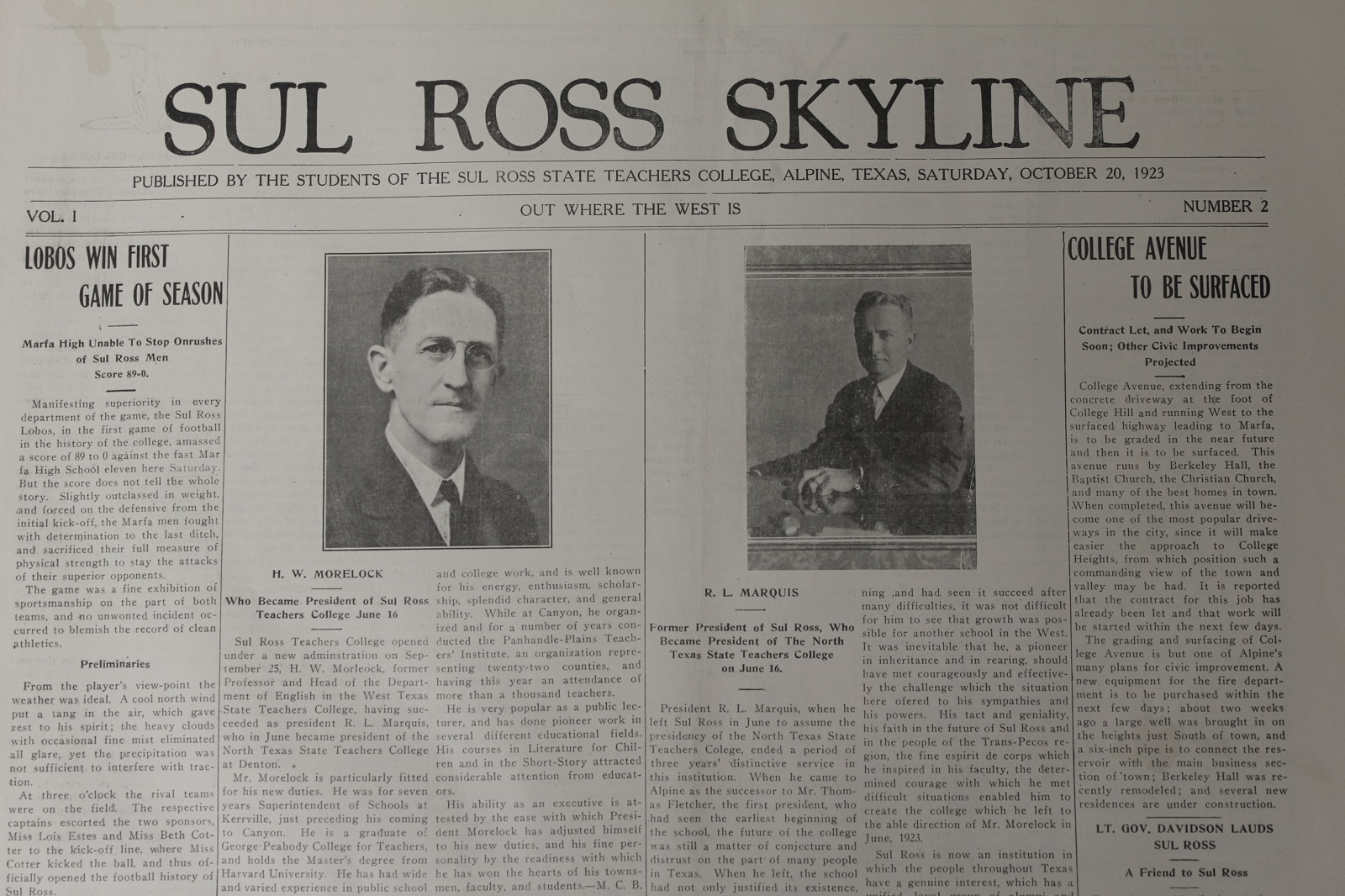 After a year-and-a-half hiatus, The Skyline, a student-produced publication covering Sul Ross news and commentary, has been revived and is now moved to an online format at news.sulross.edu/skyline/.

First published in 1923, The Skyline began as a weekly, school newspaper and remained as such until the late 2000’s when the publication transitioned to a biweekly magazine during the fall and spring semesters.

The final hardcopy of The Skyline was published at the end of the Spring, 2018 semester.

The new, online format will still provide readers with news concerning students, faculty and staff as well as campus events and a forum for students to discuss ideas and express opinions.

Formerly under the auspices of the Department of News and Publications, The Skyline is now housed under a co-department leadership between Languages and Literature and Fine Arts and Communication. The newsroom is now located in room 102 of the Morelock Academic Building.

“This is very much a combined effort between our two departments,” said Dr. Laura Payne, Professor of English and Chair of the Department of Languages and Literature.

“We hope The Skyline and Student Publications will serve as a writing and design lab to offer real-world, marketable skills for our students across the curriculum.”

Payne and Marjorie Scott, Assistant Professor of Theatre and Chair of the Department of Fine Arts and Communication will serve as co-advisors.

According to Payne, accessibility prompted the switch to an online format.

“We wanted to create a configuration that would be easily available for our students and alumni as well as for members and supporters of the larger Sul Ross community,” she said.

“This online transition allows our student-writers to produce stories and submit them at any time.”

Payne added that under the hard copy format, writers were restricted to what and when articles could be published as “going to press” was dictated by printing and distribution.

“Online formats are much more flexible and fluid,” Payne said. “The writing and editing remains firmly within journalistic principles. The platform is just more modern and contemporary.”

Payne also said Student Publications hopes to periodically produce a printed version of The Skyline featuring the semester’s highlighted pieces but noted that it remains in the planning and discussions stages.

According to Payne, Student Publications currently has around ten students working as editors, writers, photographers and layout designers between The Skyline and The Sage.

The Sage is the university’s award-winning literary magazine. The publication showcases student essays, short stories, poems, art and photography. The magazine won the Texas Intercollegiate Press Association’s (TIPA) Sweepstakes in 1999 and 2000 along with numerous individual awards.

Payne said The Skyline will feature news stories from across the Sul Ross campus highlighting university activities, opinion pieces and creative works such as memoirs, fiction and poems.

“In many ways, our hope is to encourage all Sul Ross students to appreciate this opportunity to utilize their voices,” said Payne. “In fact our mantra on the masthead is ‘Use Your Voice.'”