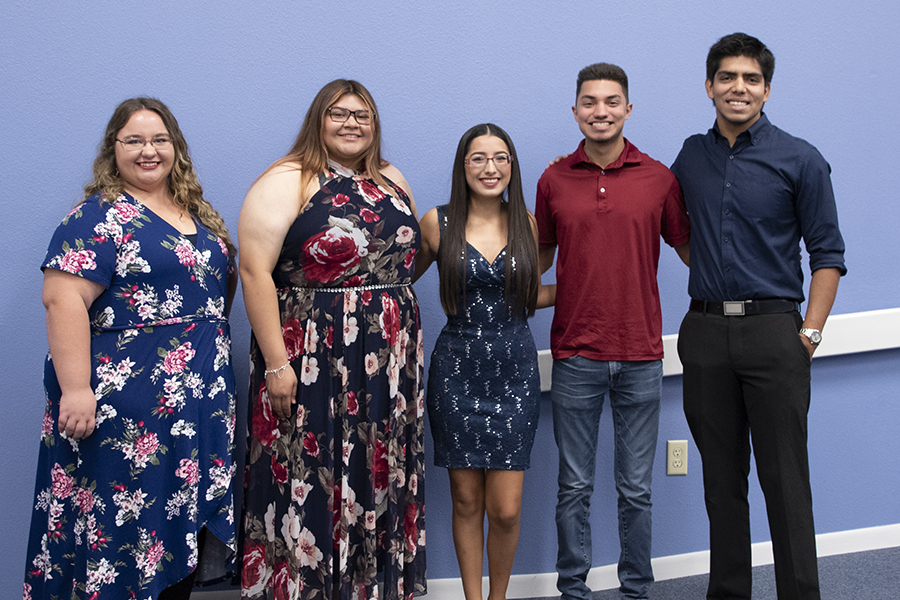 The joint grant, funded by the National Science Foundation, is administered by Southwest Texas Junior College and Sul Ross State. The $1.3 million grant focuses on the need for highly qualified science, technology, engineering, and mathematics (STEM) teachers to serve high need schools along the Texas-Mexico border.

Participating students receive scholarships for up to $48,000 over a two-year period and commit to teaching for at least two years in high-need schools. They also take part in professional development activities and provide support to STEM clubs in public schools to encourage students to become STEM teachers.

Del Rio native Jose Gloria grew up and flourished in the border town that he said “provided the perfect branch between his proud Mexican heritage and the opportunities of America.” He described how the hunger of his intense curiosity was satisfied by learning, explaining that as his first teachers, his parents provided practical education such as cooking lessons as well as moral values. As he traveled his educational path and learned under kind and understanding teaching professionals, he realized he wanted to be the same kind of mentor. He plans to earn a Bachelor of Science in Biology with teacher certification.

Fred Gonzales believes a teacher’s responsibility encompasses far more than educating students in a particular subject. He believes great teachers serve as role models, protectors, and even counselors. He plans to give his students the tools they need to succeed and make mathematics as fun and interesting as possible for students in grades 4-8. Gonzales served as a supplemental instructor alongside his professor, teaching college pre-calculus to early college high school students in his hometown of Uvalde, saying that it has been one of the best experiences of his life.

Andrea Rivera grew up speaking Spanish and learned English as a second language. She said her family experienced a difficult time during the pandemic. They overcame the many challenges and she learned how to work through obstacles and conquer them. She is studying to become a mathematics teacher, partly because she had a teacher in Uvalde High School who inspired her. Rivera chose to teach so she could make the same positive impact on her own students one day. She wants students to know she believes in them.

First-generation college student Halie Pate loves science and dreamed of becoming a teacher. She said the Noyce scholarship gives her the opportunity to pursue that dream. She attends SRSU on the Alpine campus and is the daughter of C.J. and Kelly Pate and older sister to Kacey and Augustus. She recently married Charles Fox and is excited and thankful for the opportunities the Noyce program offers.

Another first-generation college student, Gisella Rodriguez, has known since elementary school that mathematics would figure into her career plans. As a freshman, she switched from studying to be an accountant to teaching. She realized she wanted to share her passion for mathematics and encourage adolescents to continue their education. It is important to her because Rodriguez had no knowledge of how to begin her college career, but it motivated her to excel in her classes and persevere to work towards her degree. She said that she could not have done it without an amazing support system, and she is honored to be a Noyce scholar.

Dr. Jennifer Miller-Ray, SRSU assistant professor of Education and the Noyce Program Primary Investigator, said, “The Noyce program is making a tremendous impact toward improving the quality of STEM teaching for all communities surrounding SWTJC and SRSU. These scholars not only possess a love for math and science, but share a desire to make a positive impact in our communities. We want to thank our collaborating partners: SWTJC, Alpine ISD, Marfa ISD, Presidio ISD and Uvalde CISD. Their support and partnership continues to provide quality mentoring experiences to our future teachers.”

As they enter the teacher education program, the first Noyce scholars, Darissa Cervantes, Evelyn Perez, and Ashley Quinones will serve as student teachers during the spring semester and graduate, passing their legacy to the latest group of Noyce scholars.