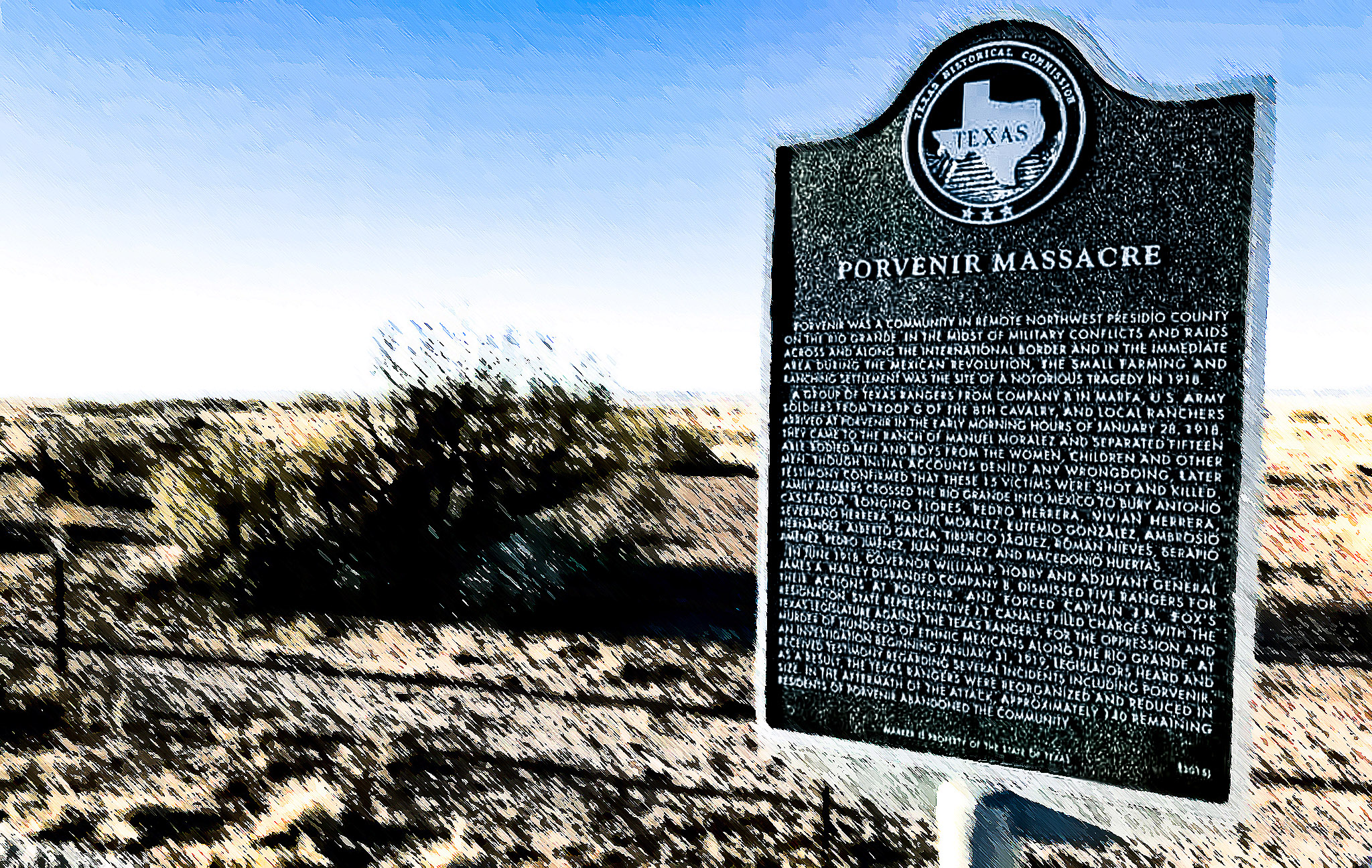 In the early morning hours of January 28, 1918, a tragic event occurred in the tiny village of Porvenir, Texas.  For an entire century, the event went largely unacknowledged.  Under the cover of darkness, a group of Texas Rangers, aided by eight U.S. Army Cavalry soldiers and four ranchers, descended upon the village and entered each of the homes, selecting fifteen men and boys from the lot and marching them to a nearby bluff where they were summarily executed in cold blood.  The grief-stricken villagers abandoned the town, many of them crossing the border into Pilares where they buried the dead.  Porvenir, which means “Future,” became a ghost town almost overnight.

In the waning days of the Wild West, anti-Mexican bias and state-sanctioned violence against Latino men and women was nothing new.  The Mexican Revolution was raging in its eighth straight year, and Texas lawmen of all stripes were desperate to retain order as Francisco “Pancho” Villa’s Villistas and other would-be marauders routinely crossed the Rio Grande to pillage the small towns that peppered the Texas Borderlands.  One such event, the Brite Ranch Raid, occurred on December 25, 1917, leaving an Anglo postman and his two Mexican passengers dead.  This heinous crime raised the ire of citizens of the Big Bend region, with some going as far as to form a committee to neutralize and keep watch over Mexicans living in the area.

Captain James Monroe Fox, then the head of Texas Rangers Company B, decided to take things even further.  A little over a month after the Brite Ranch Raid, Fox led Company B, along with eight U.S. Army Cavalry soldiers and four local ranchers, into Porvenir, seeking to make an example of the town.  According to Dr. Monica Muñoz Martinez, a historian at Brown University, the massacre that ensued was nearly lost to history; not only did Fox falsify reports of the incident, even going as far as to claim that his troop had been “ambushed” by the villagers, but the Federal Government also deemed the details pertaining to the event as classified information.

The day after the Porvenir incident, a local school teacher, Henry Warren, visited the site of the massacre.  He was joined by Juan Flores, a son of one of the slain men.  The bodies had been left where they had fallen.  Struck by what he saw, Warren penned a biting account, writing about how the Rangers “took the men and boys from their warm beds” and that the victims were “making no resistance whatsoever.”  He added that the bodies were found “lying together, side by side,” and noted that the village’s only white resident had been spared.

An investigation was led by Texas Rangers Captain William M. Hanson.  He utilized affidavits from several widows of the slain men; the widows had retained Henry Warren as their attorney.  The officers of Texas Rangers Company B were tried in court, but no criminal charges were leveled against them.  Five of the Rangers were dismissed by Governor William Hobby; the rest were reassigned, effectively dissolving Company B.  Captain James M. Fox, the aforementioned ringleader, voluntarily retired from the Rangers but re-enlisted a few years later.  Meanwhile, Senator Jose Canales, then the only Latino Texas state legislator, conducted an inquiry into misconduct perpetrated by the Rangers throughout Texas.  Despite receiving multiple threats, he pressed on with the probe, which initially found that Texas Rangers were responsible for many atrocities and extrajudicial killings of ethnic Mexicans.  Some Texas Rangers were charged with crimes and the department was heavily downsized.  In the wake of this reconstructive period, Canales required administrative changes within the division which ultimately resulted in a large decrease of violence against Latinos; it also ushered in a new level of professionalism within the Texas Rangers.

According to E.R. Bills’ book Texas Obscurities, Warren’s report directly challenged the Rangers’ account of the events, nevertheless the claims made by the Rangers went largely unchallenged and the bloodbath remained a mystery for nearly 80 years.  The few remaining family members who were present in Porvenir that day avoided speaking about the incident, fearing retaliation.  However, this silence would eventually end.

Arlinda Valencia, a resident of El Paso, was attending her father’s funeral in 1996.  Members of her gathered family were swapping stories of Valencia’s father’s life and her family’s history when her great-uncle recounted a tale of living in a peaceful village on the Texas border many years ago—until the Texas Rangers invaded their homes and killed his father.  That great-uncle was none other than Juan Flores, who, as a boy, had accompanied Henry Warren to the site of the massacre the day after it happened.

Valencia recounted, “We basically laughed, because he said the Texas Rangers had killed them. […] We told him there was no way that would have happened, because the Rangers are a good organization.”

But Valencia began to dig into her genealogy, and there she found records indicating that her family had ties to a tiny village named Porvenir.  After subsequently discovering an article about the massacre on the website for the Texas State Historical Association, she realized Flores was telling the truth.

“It hit us like a ton of bricks, and we had, we did have to cope with it.  I was sitting there going ‘I can’t believe this actually happened,’” she said.

Paula Flores Smith, the granddaughter of Juan Flores, explained that he never forgot the incident and suffered for years with symptoms of Post-Traumatic Stress Disorder.  Juan had nearly been killed alongside his father but was spared, as he was deemed too young.  In 2002, Flores identified the site where the massacre occurred; then, in 2015, archaeological research conducted at the site recovered spent shell casings belonging to government-issued firearms.  Regarding the findings, Center for Big Bend Studies archaeologist David Keller stated, “I can say with a fair degree of confidence that the artifactual (sic) distribution, the types of artifacts, all strongly conform to the hypothesis that this was the site of the Porvenir Massacre of 1918.  The findings also strongly implicate the U.S. Cavalry.”

Valencia, now the editor of the Porvenir Massacre website, began working closely with Dr. Monica Muñoz Martinez, and in 2014, an application was submitted through the Undertold Marker program for a historical marker to be placed close to the site.  The marker was approved in 2018.

To commemorate the event, Valencia assisted in organizing a special memorial service in Austin, Texas.  During the service, Texas State Senator Jose Rodriguez, D-El Paso, whose district includes the land where Porvenir once stood, announced the marker would be placed near the site honoring those who were killed.  In addition, he cited the assistance of Henry Warren and Senator Jose Canales, whose contributions helped keep the incident from fading into history and brought about much-needed change within the Texas Rangers.  The event ended in a candlelight vigil featuring an original song by Brandi Tobar.

“It’s not a secret anymore,” Valencia said. “We’re out there to tell this story.”

Now that details of the Porvenir Massacre have once again entered the public conscious after all these years, introducing a whole new generation to a grisly but important chapter in Texas history, filmmaker Andrew Shapter has begun work on a documentary film dramatizing the massacre.  The film will feature new and archival footage of interviews and archaeological digs.  Titled Porvenir, Texas, it is slated to air on PBS in the fall of 2019.  Soon after, Shapter will begin work on a feature-length narrative adaptation, called Porvenir.