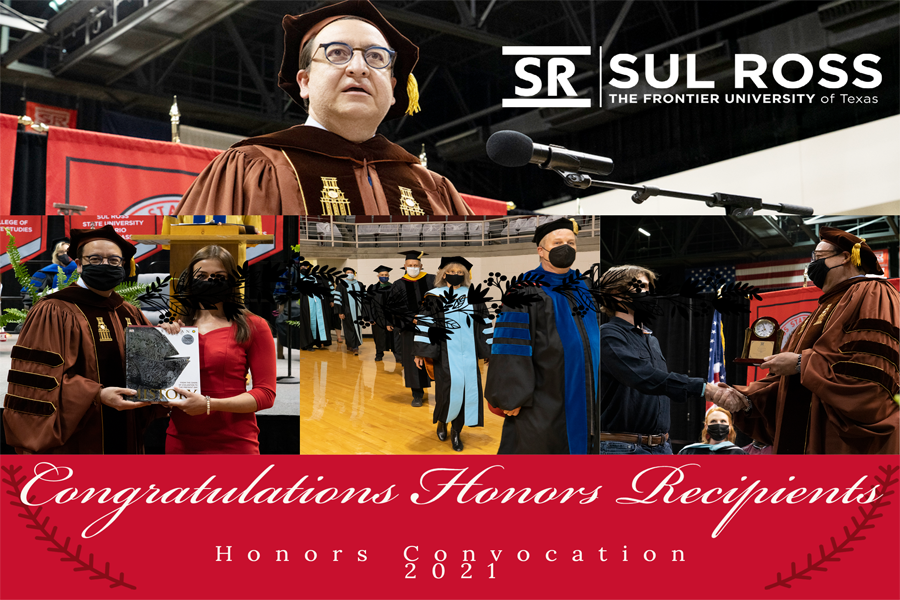 Sarah Torres and William Serrano Recognized at the 2021 Honors Convocation

Every Spring at the Honors Convocation, the President announces the recipients of the Man and Woman of the year. The nominations come from Faculty and Staff and is a recognition of their commitment to their alma mater and community. The ceremony was able to be held in person at the Gallego Center with proper social distancing and Covid precautions in place.

Woman of the Year: Sarah Torres

The 2021 Sul Ross Woman of the Year will graduate in May with a Bachelor of Arts in English with English Teacher Certification. During her time at Sul Ross, she has a exhibited a phenomenal track record in attaining the highest levels of academic excellence and has served Sul Ross and the local community in multiple capacities such as volunteering at the Food Pantry of Alpine, served as secretary for Sigma Tau Delta (English Honors Society) and has served as VP and Secretary for the Sul Ross Honors Club. As a member of the Sul Ross Honors Club and the Sul Ross Honors Program she has worked hard to inform our local community about the reality of domestic violence and sexual assault. She has collaborated with the Family Crisis Center of the Big Bend to produce programs that advocate for those who become victims of predators. She has authored the poem “Our Emerald Eyes No Longer Cry” and the fictional story “The Lockerless Hero” in Sul Ross’ own literary magazine The Sage.

Ms. Torres loves learning and is committed to helping others come to love that process as much as she does. When she leaves Sul Ross, she will become a teacher and will take all that she has learned through her coursework and her life experiences to help those placed in her charge to become well-round citizens who are also well-informed after being taught by her. This year’s Woman of the Year first muse is the language arts. She is a master of English. Her second muse is humanity. That’s why she answers the call to teach. She loves people. It’s her devotion to others that leads her to serve. She pitches in with wit, warmth, and diligence. This year’s Woman of the Year is exemplary of the finest of Sul Ross character. This student makes teaching a joy for faculty that have taught her and we are delighted to announce Sarah Torres as “Woman of the Year” for 2021. 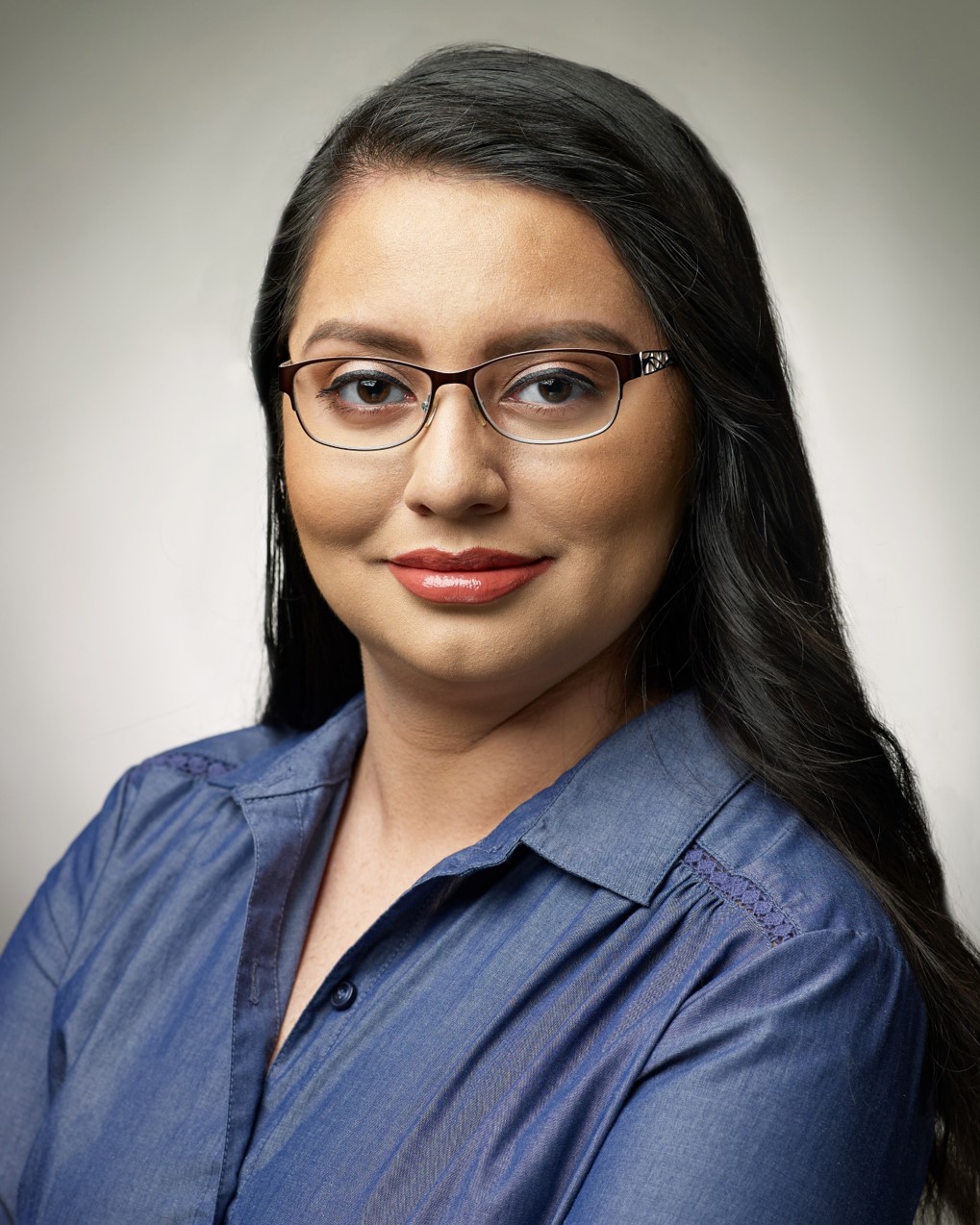 “To be Woman of the Year is a title I never expected to receive but am ever so humbled and grateful to have been awarded. This honorable title not only represents my achievements as a lover of education and an advocate for Domestic Violence Awareness and Sexual Assault Awareness, but it also represents the idea that women at Sul Ross State University are able to achieve many great things, thanks to the support of professors, peers, advisors, and the Alpine community. While I am being recognized for my achievements by being given such a grand title, I wish to let the world know that at Sul Ross State University, there are many other women here who deserve such great recognition as well. Our school fosters great education and great moral character, allowing for us as students to pursue our passions and give back to the world with our achievements,” Mr. Torres said.

Man of the Year: William Serrano

The 2021 Sul Ros Man of the Year graduated in December 2020 with a Bachelor of Science in Mathematics and is currently studying a Master of Education with the goal of becoming a mathematics teacher. This student has graciously served Sul Ross State University and the local community through Sully Productions, cross country, band, Math Club, Student Service Fees Committee, and Disciplinary Committee, in addition to serving as an RA. 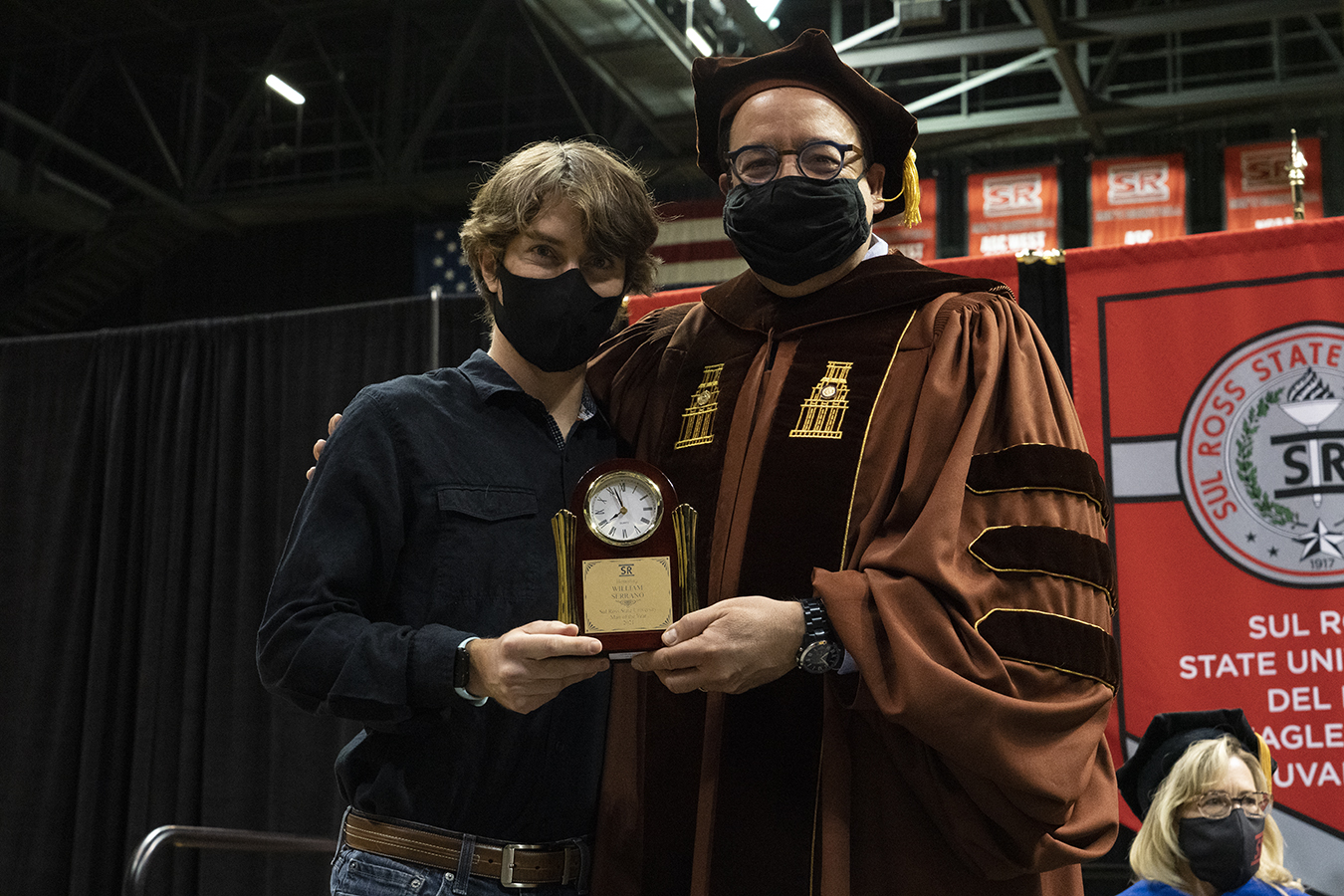 Mr. Serrano has served multiple terms as President for Math Club. He is a hard worker who gets the job done and always finds time to encourage his peers to believe in and achieve their goals. He also goes out of his way to make sure he is doing his part in the Sul Ross community by volunteering his time to make a positive impact. This year’s Man of the Year recipient has demonstrated academic excellence throughout his time at Sul Ross and is a true leader, exemplifying the definition of what it means to be a LOBO. 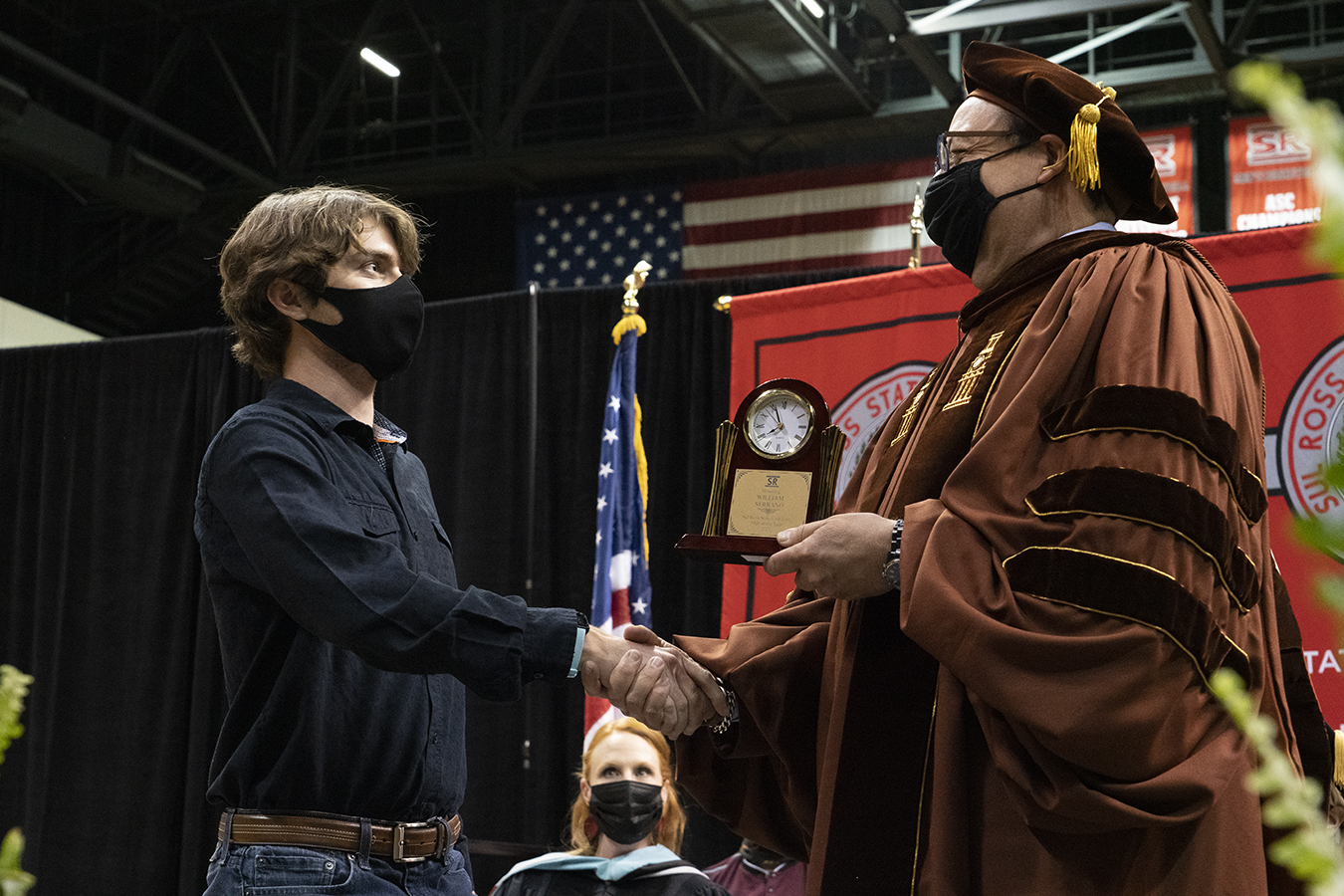 Mr. Serrano commented, “When I received Man of the Year, my first thoughts were ‘I’m not done yet! There’s still volunteering to do, one more season of Cross Country, and hearts to connect with!’. This honor means that I must work harder like Pete to make more positive changes for the school I love – SRSU!”. We are delighted to announce William Serrano as “Man of the Year” for 2021.

Candidates for the honor must also:

The 2020 recipients were Tristen Licon and Katherine Haile