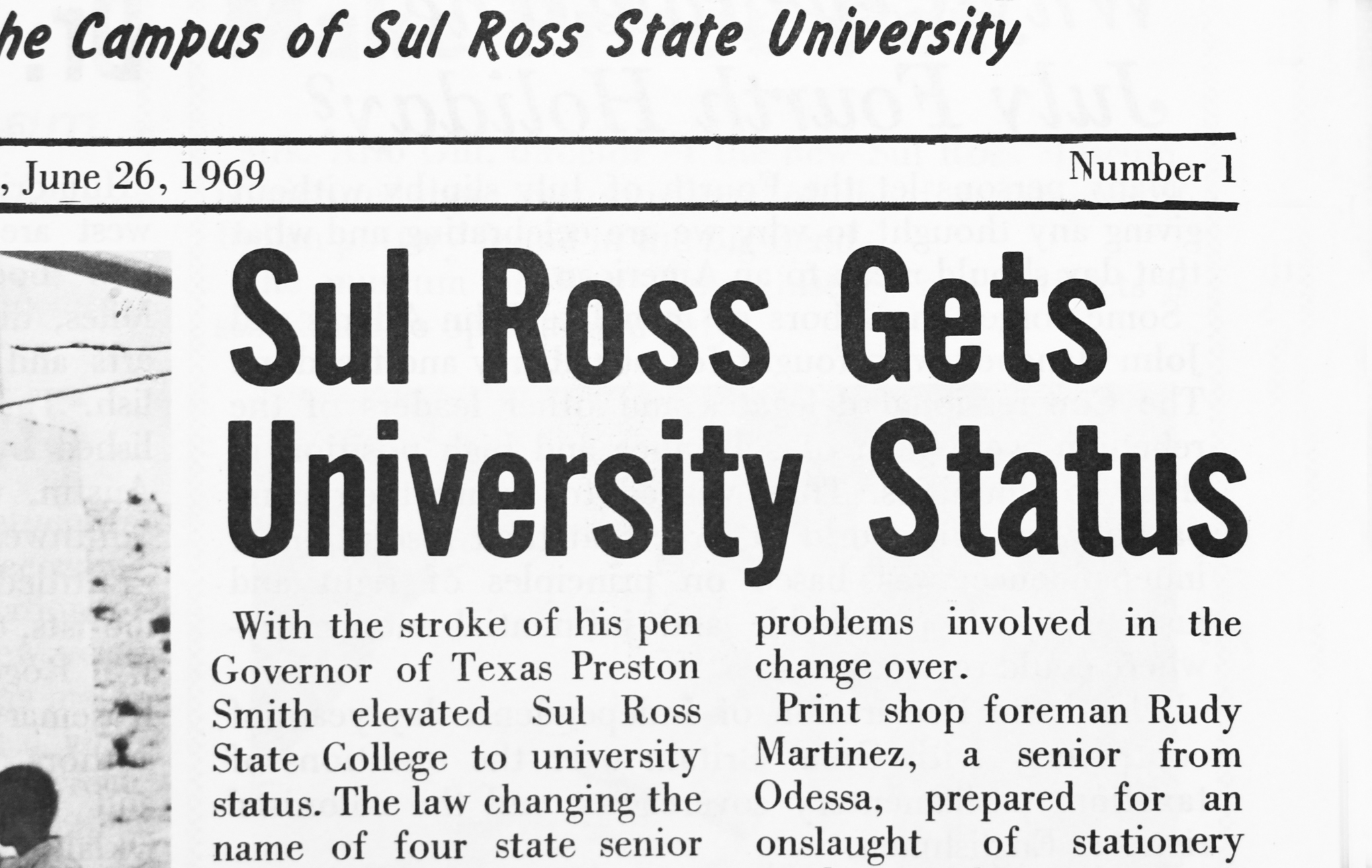 With the stroke of his pen, Governor of Texas Preston Smith elevated Sul Ross State College to university status.  The law changing the name of four state senior colleges to universities went into effect May 15 on the heels of the spring commencement exercises.

“The change of the name of our institution to Sul Ross State University is the mark of our evolvement into a position of greater prestige in the academic world,” said Dr. Norman L. McNeil, university President.  “It will keep us on an equal basis with other institutions of higher learning in Texas who are changing their names to Universities.”

While President McNeil conferred “college” degrees on a group of seniors with mixed emotions (seniors will have an opportunity to obtain university degrees), several persons on campus began to think about the problems involved in the changeover.

Print shop foreman Rudy Martinez, a senior from Odessa, prepared for an onslaught of stationary orders.  Thousands of memos, letterheads, envelopes, and official forms carry the name Sul Ross State College—this has to be changed.  New pamphlets bearing the University title were rolling off the presses at the rate of 4,000 an hour within a short time after the switch.  Martinez estimates that the complete eradication of “college” from all school forms and printed matter will take some time.  The print shop is looking forward to a busy summer.

The sign at the edge of the campus was one of the first to be redone in a university fashion.  Students leaving at the end of a long term said goodbye to Sul Ross State College while those returning for the summer session were greeted by Sul Ross State University.  Next in line for the name change is the fleet of school-owned vehicles.

The college bookstore now becomes a university bookstore.  Pennants, gym clothes, sweatshirts, ash trays, mugs, pens, notebooks, and decals all find themselves obsolete.  Many items sold by the store were fortunate—they displayed only the name Sul Ross State with neither a college nor a university rank.

The main problem will be remembering to “say” university.  After several years of conditioning one’s reflexes to following Sul Ross State with the word college, a few persons on campus might find their speech slightly garbled as they try to correct themselves in mid-college.  Be careful.  You might hurt yourself saying “Col-iversity.”