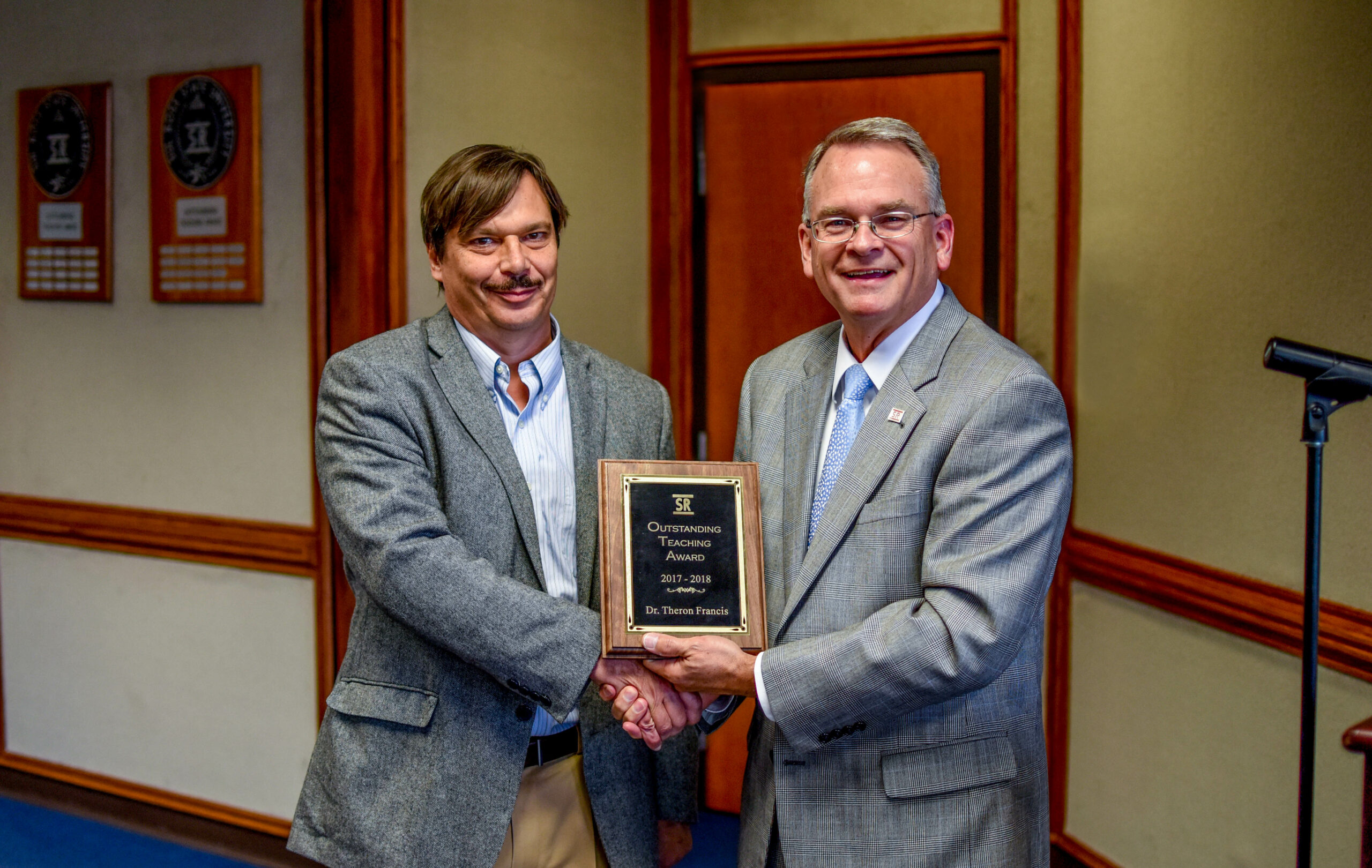 As with his previous award, Francis views his most recent honor not as a recognition of him but of the University’s commitment to his students’ success.

“The award recognizes that my work fits into Sul Ross’ student-centered, experiential approach to teaching and learning,” he said.  “My students show their talent in class and finish the semester feeling they had a meaningful experience.”

Francis believes both he and his students learn best by performing a service learning project that is useful for the community.  This approach broadens the classroom setting by eliminating the border between university campus and society at large.

“For me, service learning is advocating for the environment that sustains us,” he explained.  “Service develops the virtue of civitas, one’s sense of duty to one’s own community.  It prioritizes others over oneself.  It also recognizes that knowledge has a practical dimension to help others with needs, in either the social or natural world.  This teaching approach serves an ethical purpose by having students think about local and global relationships.”

An example of a Francis-led service learning project was on view this past spring when one group of his students researched the voting rates and attitudes of Sul Ross students.  A second group researched the Brewster County procedures required to establish Sul Ross as a voting site.

One of the student researchers, Brandt Buchanan, later submitted a proposal to the Brewster County Election Commission to move the 8th precinct voting site to Sul Ross’ Wildenthal Library.  The Commission voted unanimously to support the move in time for this November’s election.

“Now, for students and hopefully other residents of the 8th precinct, it will be much easier to vote,” Francis noted.  “This is an example of a project that used authentic communication between students and their community, and that communication resulted in a positive impact for all involved.  These efforts also demonstrated that student research is meaningful when it deals with real issues and addresses real audiences. My students say their research is better when it is needed.”

For Francis, broadening the university classroom means not only getting students out into the community but bringing the outside world to Sul Ross as well.

“This past semester, while teaching Rachel Carson’s Silent Spring, a panel of women environmental activists—including Susan Curry, Sandy Sage, and Lori Glover—visited my Science and Literature class,” he said.  “And through Skype, my World Literature class got to meet a group of Syrian refugees.”

Francis also builds educational relationships through mentoring.  For the past three years, he has taken students to present at the Sowell Conference on environmental literature at Texas Tech.  One student who twice presented in Lubbock was Joey Chavez, whom Francis further mentored as a McNair scholar for two projects.  In 2016, Chavez was recognized as a finalist for his McNair research on noted environmentalist and author Barry Lopez.  Chavez is now in the comparative literature Ph.D. program at Texas Tech.

“Ultimately, my goal is always to put students into the world,” noted Francis whose current students are discussing Sierra Club and National Park Service projects.  “I ask them to be receptive to their surroundings and to each other, and most importantly, I ask them to care.”