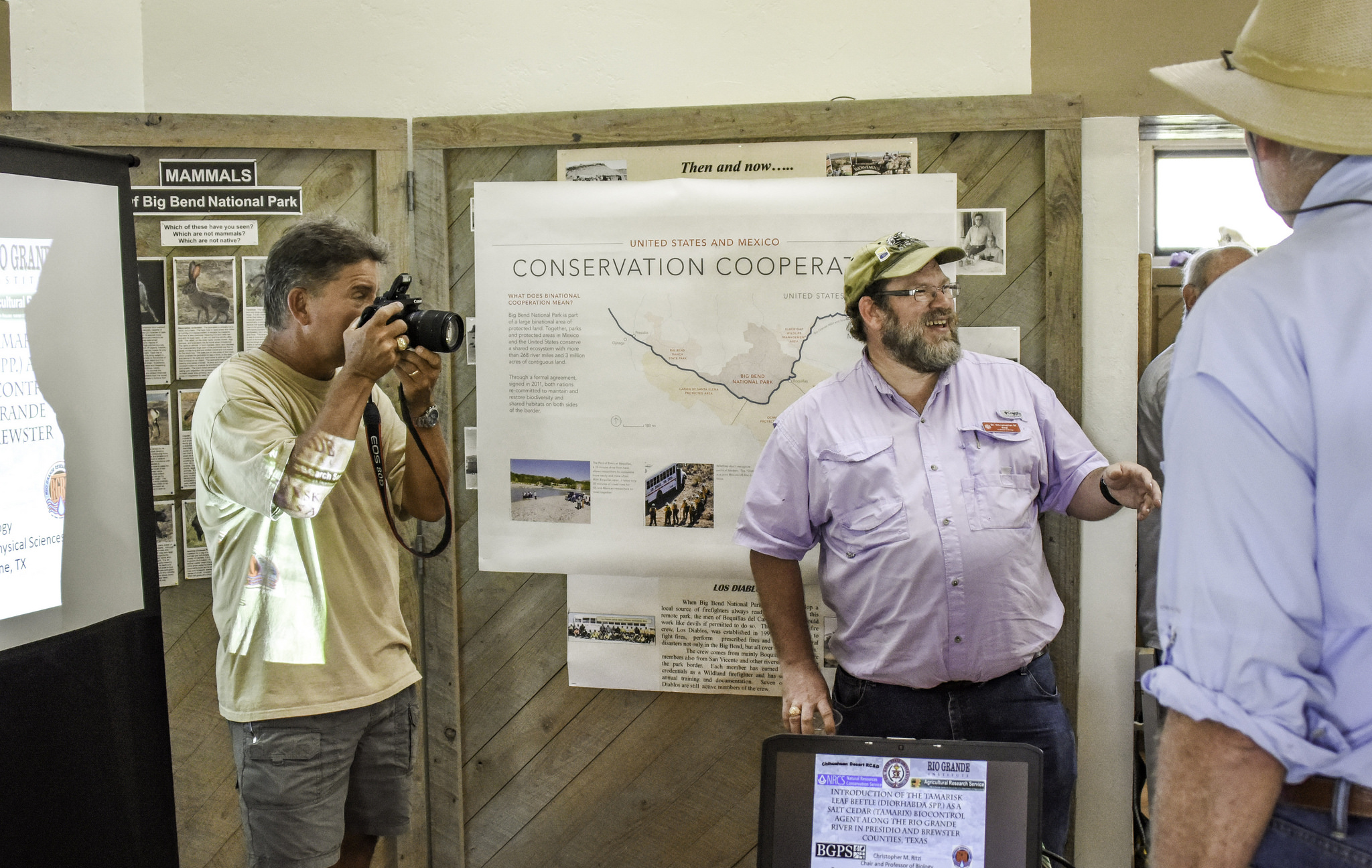 • by Oliver Pinckney and Paul Slocumb •

Sul Ross professors Dr. Chris Ritzi and Dr. Kevin Urbanczyk spoke in Big Bend National Park on Friday, Sept. 28, about Rio Grande River research efforts being conducted by SRSU faculty and students.  Their talks were a part of the celebration for the 50th anniversary of the National Wild and Scenic River Act and the 40th anniversary of Congress’s designating a 196-mile portion of the Rio Grande as part of the National Wild and Scenic Rivers System.  The weekend-long celebration was co-sponsored by the Park and the Big Bend Conservancy.

Inside the Rio Grande Village Visitor’s Center, Ritzi, a biology professor and chair of the Department of Biology, Geology, and Physical Sciences, discussed research on the intentional introduction of the tamarisk leaf beetle as a biocontrol agent for the invasive salt cedar plant.

Salt cedar is native to many countries in Europe, Asia, and North Africa, and was originally brought to North America in the nineteenth century as an ornamental plant and to help prevent streambank erosion; however, as Ritzi explained, it eventually became a serious threat to watersheds, especially in the Southwestern U.S.

“The problem is, while we brought salt cedar in to prevent erosion, it ended up doing too good of a job.  Salt cedar stabilized streambanks, then spread to more areas like channels, stabilizing soil there,” he said.  “The next thing you know, we have our meandering rivers, creeks, and streams turning into ditches and channels because the salt cedar limits the waterways’ ability to shift and maintain a natural dynamic.”

To help restore that dynamic, a group of researchers and agencies submitted a grant application in 2006 to study the control of salt cedar as a means of improving grazing land conservation along the Rio Grande.  While the effort was designed to produce economic gains, controlling salt cedar for grazing-land gains would also mean an improvement in river water flow.

At three Rio Grande sites north of Presidio, three species of beetles were introduced onto salt cedar branches which were initially isolated via net sleeves, then cages, before being released into the surrounding environment.

“We did not want the beetles being released into the wild until we had a good understanding of what that release would bring,” said Ritzi, adding that after the release researchers “continued to monitor vegetation, vertebrate presence, insect activity, and other aspects of the local environment.”

After three months of isolation, the beetles were released and quickly showed their biocontrol ability.

“When salt cedar turns from green to orange that means the leaves are gone.  All you are seeing is bark,” said Ritzi.  “And from 2006 through 2009, that was pretty much the activity that we saw—salt cedar near these original release sites north of Presidio were being defoliated beautifully.  Around 2010, the beetles really took off, and we went from monitoring hundreds and thousands of beetles to millions of beetles.  And, they were moving ‘river miles’ in a season.  We literally had them go from covering an acre to covering a forty-mile stretch along the river.  That’s when we realized the project had finally taken.”

Researchers also began to see the salt cedar being replaced with grasses.  While such a replacement is good for riverside ranching, Ritzi hopes to see a more varied ecological comeback in the future.  A reestablishment of native coyote willow, for example, would benefit the federally endangered southwestern willow flycatcher.

“But, if we want to see more of a cottonwood-willow habitat being restored, it’s going to take a hands-on, active restoration effort.  Those plants just aren’t as well-represented in the seed bank,” said Ritzi, adding that salt cedar reduction also benefited area fauna.

“In general, every single animal group we’ve examined has done better in areas where salt cedar has been removed.  When you remove salt cedar you get a larger diversity of plant life.  With increased plant life diversity, you get increased animal diversity.”

“The River’s flow has declined significantly since pre-development because we are using more water upstream on the Rio Conchos (a river in Mexico which joins the Rio Grande at Ojinaga) and the Rio Grande.  And invasive plants like salt cedar have colonized the banks of the river,” he said.  “One result is the large problem of too much sediment and not enough water to move that sediment.  Whereas in pre-development there would have been a wide floodplain that periodically received sediment from flooding, today the river doesn’t have the energy to do that.”

To measure changes in water flow and sediment, Urbanczyk and his students conduct topographic surveys which create three-dimensional models of a river channel and its banks.  After creating a map, they will return to the same site following a flood event or a restoration project like the salt cedar removal described by Ritzi, and they survey again using a process called geomorphic change detection.

“The software we use creates one 3-D surface with the first survey, then a second 3-D surface when we return, and basically it subtracts one from the other and this tells us whether sediment was removed or added to the area,” he said.

Urbanczyk went on to detail some of the tools and processes used to create the topographic surveys.

“The equipment we use starts with LIDAR which is a laser scanner that sits on a tripod and shoots millions of light pulses in a few minutes, shooting a pulse, waiting for it to comeback, timing the return, changing its aim, shooting another pulse, and so on,” he explained.  “It ends up doing a full three-dimensional scan and creating a huge point cloud where every point is an XYZ coordinate that one of those laser beams bounced off of.  The technology makes this happen almost instantaneously.  In two minutes we will get three million points in the cloud, and the result is a very detailed topographic map.  Then we use other traditional survey instruments.  One is called the Total Station, which uses a laser as well, but it’s a single pulse that establishes location.  We also use a high precision GPS system called RTK combined with an OPUS (Online Positioning User Service) solution, where through years of work in Boquillas with our group and with the USGS (United States Geological Survey) we have established a network of control points that allows us to compare our new maps with those made in previous years.”

Urbanczyk also discussed the challenges of doing such precision work in an outdoor environment.

“A typical trip for us will be in Boquillas Canyon, and while an outfitter will do that trip in three days, we typically do it in eight because we stop and survey.  We’re in the backcountry.  We’re in canoes.  And we have LIDAR, total station, RTK—and the environment is a huge variable.  I can make this equipment work in my lab, but when we’re out there and we’ve got a satellite phone as our only communication, and things go wrong, I have to tell my students one of my favorite acronyms: FIO or figure it out.  When things go wrong, you either figure it out or you don’t get data for that trip.  And it’s a huge investment of time and money just to get a group out there.”

The Big Bend Conservancy which co-sponsored the day’s celebration was created in 1995 to “promote, protect, and raise funds for Big Bend National Park and the Rio Grande Wild and Scenic River.”  The website http://www.bigbendfriends.org/ offers more information about the organization.