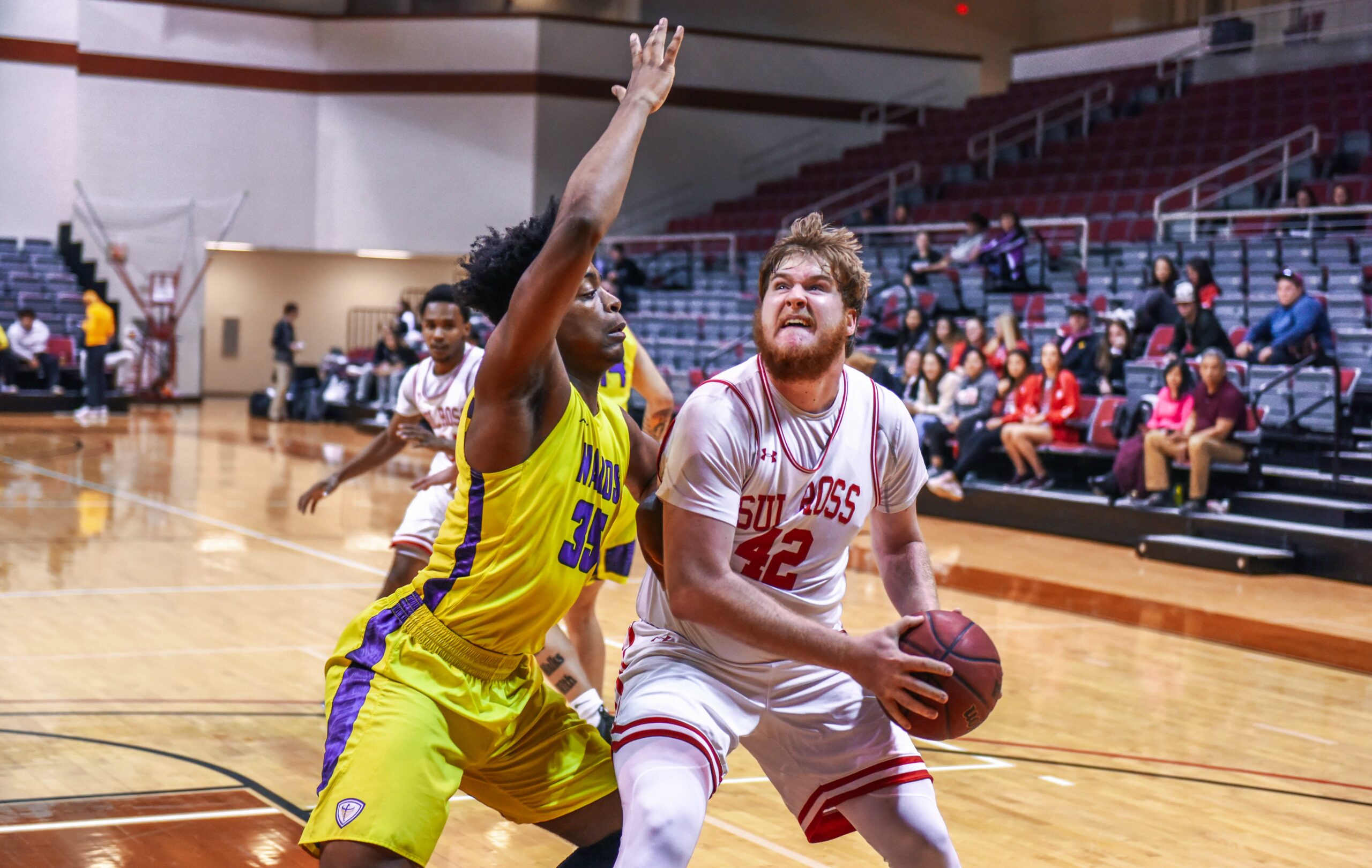 ALPINE, Texas- Following a 97-97 tie at the end of regulation, the Concordia University Tornados outscored Sul Ross by a 15-12 margin in overtime and claimed a 112-109 ASC victory over the Lobos in a Thursday night battle at the Gallego Center.

B.J. Hollis led with a season-high 30 points in the effort.

Hollis started the contest nailing a three-point bucket and put the first points on the board for either team nearly a minute into the game.

The Tornados knotted the game at three on the ensuing possession before a layup by Jezreel Griffin finished off a quick 5-0 Lobo run for a 10-5 Sul Ross lead with 15:41 left in the first half.

A triple by Griffin at the 14:04 mark extended the Lobo lead to six before a three-point basket by the Tornados’ Spencer Bone gave the visitors a one-point, 14-13 lead at 12:29.

Concordia then spread the gap to three off a layup by Zaid Harris before Jola Otubu’s three-pointer tied the game at 16 at 11:35.

The Tornados broke the tie and held a slim lead over the next minute and a half before Jack Kirkpatrick’s fast break layup knotted the outing up at 19.

Concordia broke the tie again and would maintain another slim lead over a three-minute stretch before Tristen Licon’s three ball tied the game at 26 at the 8:08 mark.

Following a quick two-point go ahead by the visitors, Hollis drained a three-pointer at 7:01 for a 29-28 Sul Ross lead.

The Lobos were able to maintain a double digit lead as Avery banked again off of two foul shots for a 52-42 advantage heading to intermission.

Sully extended its lead to 13 off another triple by Hollis 16 seconds into the second half.

A dunk by Brayden Fry at the 15:14 mark put the Lobos ahead by 14 before Bone connected on a triple on the next possession to cut the visitor deficit to 11.

Hollis rang in another three-pointer at 14:33 extending the Lobo lead back to 14.

The Tornados fought their way down to a pair of three-point deficits before Kirk Detarrius’ layup cut the Sul Ross lead to one at 8:37.

Sully then assembled some quick runs to lead by nine off a layup by Otubu for an 85-76 Lobo lead with 7:20 remaining in the game.

A jumper by Ronnie Hamilton at 3:41 narrowed Concordia’s deficit to one before the visitors grabbed a one-point go ahead off a scoop shot by Joe Neal at 3:41.

Two ties would follow before Neal finished off a 7-0 run with another layup giving the Tornados a 94-89 lead at 1:15.

A Licon free throw tied the game at 94 as Sully wrapped up a quick 5-0 run with 38 seconds left in the contest.

Three foul shots by Neal put Concordia ahead by three before Hollis banked on a three-pointer in the final five seconds to send the game to overtime.

Fry broke the knot with a layup 16 seconds into the overtime period.

A three-pointer by Bone at 2:40 returned the lead back to Concordia before Conner Dawson’s layup at 35 seconds pulled the home squad to within one.

Two free throws by Neal at 13 seconds extended the Tornado lead to five before Otubu knocked down a triple with five seconds remaining and narrowed the Sul Ross deficit to two trailing 111-109.

Neal returned to the stripe to convert the final free throw as Concordia prevailed for the 112-109 win.

Licon and Avery finished the night with 15 points each while Dawson and Otubu added 12 points each. Fry sported 11 points while Licon led rebounders with nine boards.

The Lobos host the University of Mary Hardin-Baylor at 3:00 p.m. Saturday. The contest will also be streamed on the Sul Ross Sports Network.