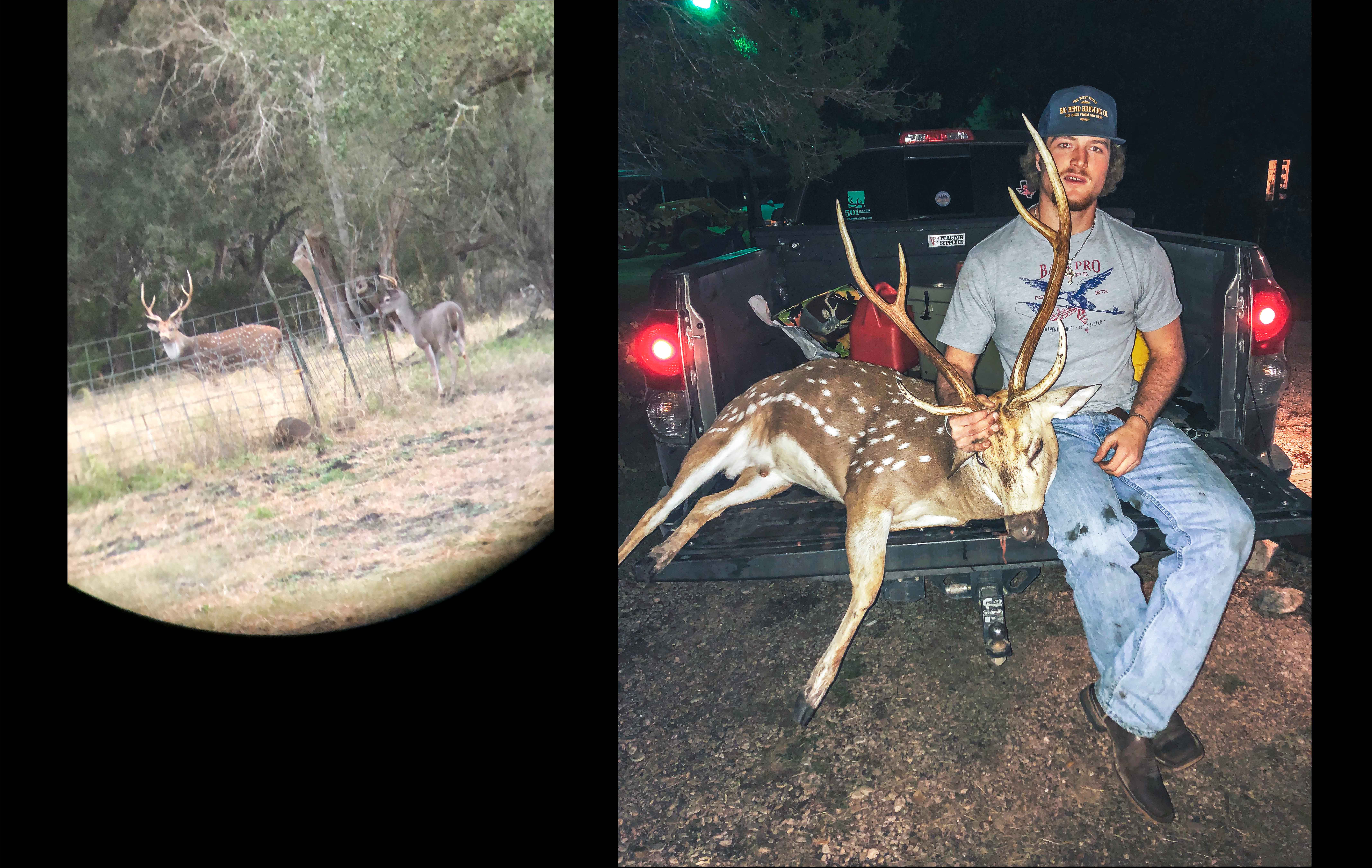 When Thanksgiving break finally arrived, I was ready for a full week of Texas Hill Country hunting.  Anticipation of the hunt had left me sleepless the night before—a certain axis buck occupying my thoughts.  This buck wasn’t the biggest, but being old and clever presented him as a Trophy in my eyes.

Having made the long trip from Alpine and Sul Ross to the big town of Hondo, I needed a nice home-cooked meal.  A big steak soon filled my belly, and it was time to hit the hay.  The next day would be a long one.

Morning came quick—as did a son’s call to duty.  Before heading out to hunt, I would first have to help my parents build a greenhouse for mom’s winter plants.

Shortly past lunch, it was time to head to the blind.  Pulling through pasture, I saw a few axis does which got me excited—the deer were moving.  Then I found the feeder and bit of bad luck—no feed.

When the feeder goes empty, the animals know, and I quickly lost confidence in the day’s hunt.  Fortunately, I happened to have about half a bag of corn.  And just as I spread it out, a small axis doe appeared and began to dine.

At the very back of the meadow, I could see movement in the brush.  A small herd of axis deer, unaware of the freshly spread corn.

And then I saw him.  Five feet away, the Trophy stepped out and began grazing.  It would have been an easy shot, but I wanted a closer look.  I waited.

The herd never came in.  And about the time I reached for my gun, another deer walked behind the Trophy, so the shot would not have been ethical.  Before long the group wandered off with only the lone doe remaining behind.  Soon it was dark.

The next day was spent putting the last few pieces of greenhouse together.  Mom was happy.  After a late lunch, I went to the ranch to fill the feeders and got to the blind late.  But in less than five minutes, I spotted a young white-tailed doe trotting out.  Not far behind her was a nice ten-point, symmetrical and young, about three and a half years of age.  Sitting in a blind can be boring without animals to watch.  And watching is learning.  Watching this doe, I knew she was about to leave because something in the brush had startled her.  The Trophy?  But before the doe could walk away, darkness arrived.  I quietly packed my stuff and snuck out

The next day I woke up and had to go to work.  My boss at Whoopy’s Welding needed help building a 22-foot cattle guard.  I told him I needed off early to hunt, and he assured me it wouldn’t be a problem.  After a long day of cutting and welding pipe, it was time to head for the blind.

Once again pulling through pasture, I sensed change.  The first deer I saw was that same young ten point.  He came trotting in like he owned the place.  Minutes later, an axis buck approached the feeder.  I watched him for a long time.  I was hesitant because this was not the Trophy I was after.  But after 40 minutes of sitting, I decided this was the animal I would take.  I reached for my gun and brought it up to the window.  Then I paused.  Through the scope, I watched him for five minutes.  I was calming my nerves.  I remained hesitant.  This wasn’t the Trophy.

One loud shot and a magnificent animal took his last breath of cold evening air.  Only when reaching him on foot did I realize his beauty.  He was a middle-aged axis with plenty of potential to reach trophy size.  But since this was the last day I could hunt, I had taken advantage of the opportunity given.

While I felt blessed for the hunt, and knew I would not waste the deer, I also felt regret for ending the potential.   Country boy.  Maybe.  Soft heart.  Yes.

The regret was also in taking a younger deer when I knew that old stud was still out there.  And probably going to die within a year or two.

For now, that Trophy will continue to live in Hill Country meadows and this smile on my face.